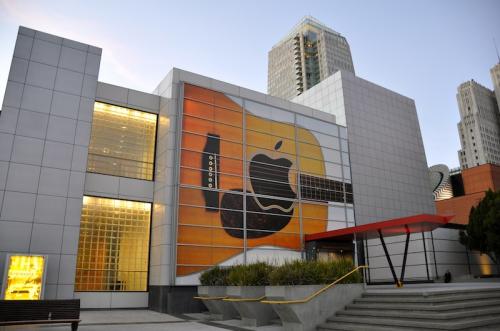 Yerba Buena Center for the Arts prepped for Apple's media event
The Wall Street Journal reports that Apple will launch its 99-cent TV show rentals through the iTunes Store tomorrow, with Fox and ABC set to serve as launch partners for delivering content. A report earlier today had indicated that Walt Disney (which owns ABC) was on board with that plan and that News Corp. (which owns Fox) was undecided but leaning toward participating.

As part of the Apple event Wednesday, News Corp.'s Fox and Walt Disney's ABC networks are slated to be announced as offering 99-cent rentals of television shows through the iTunes store, according to people familiar with the matter.
Click to expand...

According to the report, Fox's participation will be limited in duration, at least to start, and will be limited to shows such as Glee, Bones, and Lie to Me for which it owns both the production and broadcasting rights.

Echoing the report from earlier today, the new article claims that a number of News Corp. executives are uneasy about Apple's plan, fearing a disruption of the traditional television business. The company ultimately agreed to go along with Apple, however, as an experiment in alternative means for delivering content to consumers and in order to win goodwill with Apple to set stage for partnerships in other digital content ventures.

However, being $0.99 I may reconsider my stance on the matter.
Comment

Agreed!!
Why don't they just allow streaming ones with a few commercials for free??
Apple TV will be fail.
Most young people are now doing the opposite...streaming TV to their computers not the net to their TVs
Comment
M

I m kind of uninterested in tomorrows Apple event. This is the first time I am ever not interested in any Apple event. Nothing really excites me whether it's Ipod touch, 99 cents TV shows etc. Good luck to Apple though. I hope it surprises me.
Comment
J

But in all seriousness, looks like an interesting move. I don't know if it'll pan out though to be honest, especially in a Hulu-filled world. Netflix integration with iTV/Apple TV/whatever seems more of a feat than this news item...but I could be eating my words soon.
Comment

Apple would have to pay me more than 99c to watch Glee.
Comment
X

it doesnt stay at 99 cents. a season 24 bucks. you can nearly buy a season for that
Comment

The marketplace will demand an all you can eat tiered model, something that has been in effect for 40 years.
Comment

You can watch TV episodes from multiple websites all for free; abc.com, fox.com, etc. You pay and I'll get it free. Your loss.
Comment

I already get netflix on so many devices I cannot get excited that the tav will have it, $.99 cents to rent tv shows is a lot when I just streamed last season of rescue me for my $8.99 fee thru netflix along with about a half dozen movies not even coating the disks I received
Comment

Scarpad said:
I already get netflix on so many devices I cannot get excited that the tav will have it, $.99 cents to rent tv shows is a lot when I just streamed last season of rescue me for my $8.99 fee thru netflix along with about a half dozen movies not even coating the disks I received
Click to expand...

I prefer buying for only a $ more. However, I'm sure some people will find this useful. Props to Apple for offering more services to make its customers happy.
Comment

pay or not, i just hope itv runs iOS so I can grab the new Plex app.
Mac Mini with Plex + iTV's = good enough for me
Comment

I watch too many Fox shows for this to make a difference in my daily viewing, especially if episodes arent available immediately after they air at the latest. I'm not paying $30 per month to rent Fox shows, even though I'm trying to rid myself of commercials during TV shows by May. I already have part of that covered with Netflix, but this is too expensive unless there are network subscription options. Ugh.

I could already stream episodes pretty soon after they air for free with literally ten times less commercials. This will be pretty sucky if episodes aren't at least available to rent (and not keep, same as free streaming) the same night they air. I would pay for a subscription to a network, even if that meant force ads before and after content (though not during).
Comment
J

Exactly what price would you pay to rent an episode then?
Comment
B

Let's get AMC on board with this 99 cent rental thing. I need to catch up on Mad Men and Comcast doesn't have AMC HD.
Comment
M

igazza said:
Bet its US only.
Click to expand...

Oh sure. Despite the fact that most of the income these days comes from non-US soil. They will be thrilled by it. Not.
Comment
C

Hopefully new ATV will be iOS based, which will inspire all the networks to write apps, which will force Apple to come up with a better pricing structure to compete.

$.99 per episode to own, with a full season discount. Thats where I would consider buying.
Subscription is almost pointless at this point. Apple has missed the boat. Networks now provided a lot of free rotating ad supported content. The apple deal would have to be pretty sweet to beat free.
Comment
Y

Well, at least, it makes us budget our entertainment wants. Sure, we pay flat rate monthly to our cable co. However, out of 250 channels, I watch 5 channels. Among them, I watch about 12 shows. So above the flat rate, we may rent on-demand movies. I may do that once every 2 months. So, between netflix, apple's itune, other apps or sources, I might spent half the flat rate I pay to cable co. It will save almost 5 to 6 hundred dollars per year. On a busy month, I might not watch anything except Netflix. 99c is not expensive. If apple could get 1 dollar monthly subscription per show per month that would be great ( 25 c per show).
Comment

WiiDSmoker said:
You can watch TV episodes from multiple websites all for free; abc.com, fox.com, etc. You pay and I'll get it free. Your loss.
Click to expand...

Well, at least it will be easier to watch them on your TV. Surely, the iTV will have Safari that you go to these websites. ABC,CBS and Fox will have them in the HTML5 format. You can create web icons onto the main screen.
Comment
R