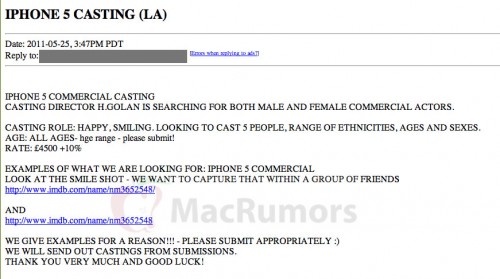 Earlier today, a casting call posting briefly appeared on Craigslist seeking a actors for an iPhone 5 Commercial. The ad seemed to have been only up for a couple of hours, but long enough to get indexed by Google and screenshot'd by one of our readers.

The ad was looking for both Male and Female commercial actors. The role was described as "Happy, Smiling" and they were looking to cast 5 people in a range of ethnicities, ages and sexes. The payment was curiously listed in british pounds.

It's certainly strange that such an ad was posted in the first place, explicitly mentioning the "iPhone 5". It may have been a mistake or a hoax. Arguing against a pure hoax, however, is the fact that a very similar ad ran in New York about a month ago, but that time just for the "Apple iPhone" (not the iPhone 5):

Apple is known to film commercials ahead of product launches. In fact, last year at about this exact time (May 24th, 2010), Apple was casting commercials for FaceTime in their then-unreleased iPhone 4. That said, we were unable to find any further online information on casting director H. Golan or the production company listed.

This most definitely fake. I work at an online casting software company where 98% of LA's commercials are cast through, and any legitimate casting director would NEVER post a job like this in a public place. The client would fire them in an instant.
Comment

At least the homework was done as to whether it's been done before and if the poster was legitimate.
Comment

jmann said:
This most definitely fake. I work at an online casting software company where 98% of LA's commercials are cast through, and any legitimate casting director would NEVER post a job like this in a public place. The client would fire them in an instant.
Click to expand...

So you're saying the April post was also fake? Serious question.

gigs-n8h4w-2402790550@craigslist.org is the reply email that was blocked out in the pic
Comment

itsthemacaddict said:
gigs-n8h4w-2402790550@craigslist.org is the reply email that was blocked out in the pic
Click to expand...

That's an alias. You don't get the recipient's actual e-mail address unless they reply to your inquiry.
Comment

arn said:
So you're saying the April post was also fake? Serious question.

I would say with almost 100% certainty it is. Many times the Casting Directors when hired by the client (Apple) are required to sign NDAs and are prohibited from listing product or company details when posting the breakdown online for the agents to submit their talent to for auditions.

Legitimate casting directors won't post on craigslist either. If they are looking for someone very particular and they don't get the right submissions from the agents, they can release a project publicly for actors themselves to submit. But that is very rare, and usually only seen when casting for something like an obese person that is a professional bird caller or something super-specific like that, but that is the only time that you will see publicly listed submissions for big time commercial roles.

But I can guarantee they won't be risking being fired by a client for posting a project on craigslist.
Comment
M

The shoot is set for LA (I'm assuming Los Angeles, California) but the payment is in British Pounds. Hmmm....
Comment

On Craigslist? Really? Is there any history of apple (or their ad companies) are getting their people for the ads con Craigslist (and even naming the product)? Did they look on Craigslist for "Facetime/iPhone4 actors ?

To me this looks very unprofessional and I also wouldn't think they put the "iphone 5" in any posting like that.

So I would say two possibilites:
(1) fake
(2) smart PR campaign to keep the iphone name in the press coverage (building up the iPhone5 hype)


arn said:
So you're saying the April post was also fake? Serious question.

I would say a big difference is that it didn't mention any unreleased products .... Also the article doesn't say where this was posted - was it also on Craigslist?
Last edited: May 25, 2011
Comment
N

Can not believe I am even wasting the time to respond.

Come on folks. Casting agencies have thousands of actors readily available. They are not about to post in something as wild as Craigslist.

And to the person that attributed an earlier posting to make it look real - I have some prime Florida real estate for you.

2. No self respecting firm would mention the name publicly. For a high profile campaign such as the iPhone 5 will be, an open casting call is possible, but it's likely the actors won't even know what they're performing in until they are actually cast.

3. Apple most certainly uses some of the highest profile agencies in the world for their ad campaigns. These firms do not advertise on Craigslist.
Comment

I think that the fact that it's written in all caps, has a few !!!s thrown in there, and a "" sends this screaming to be a fake, but hey, maybe I'm mistaken here...
Comment
C

mobile-caffeine said:
The shoot is set for LA (I'm assuming Los Angeles, California) but the payment is in British Pounds. Hmmm....
Click to expand...

If you observe the ad closely, you'll realize that not only is it a fake, it was likely purported by someone connected with Anand Desai-Barochia.

​
Why? Because they conveniently provided two links as examples of who they're 'interested in'. Notice that both links are identical aside from the trailing '/' sign, which effectively does nothing as far as hyper-linking goes.

Why did they post both variations of this guy's link? Clearly for search engine spider indexing purposes. They knew how much crap would be generated from this chatter and how many times his link would be mentioned all over the web that it would naturally make his IMDB traffic up there next to Harrison Ford. Believe it or not, casting companies using IMDB actually consider an actor's page traffic when searching. Meaning, if an actor's IMDB page has recorded more hits than others, they immediately assume that there's a reason this actor is getting so much 'attention' by other casting agents.

In a nutshell, while I don't have proof that my theory is correct, I'm willing to bet on it. The first thing I thought when reading the initial posting was why they'd need to say "we're looking for someone like him". If we're talking about an ad for a product that has over $1.5 billion dollars in revenue, you'd think that they could figure out a way to afford that guy instead of posting a casting call looking for his cheaper look-alike.

apple would never put seams on their iphone!
Comment
C

This is clearly a hoax that the perpetrator has published in the hope that it goes viral thus bringing traffic to the IMDB profile of Anand Desai-Barochia.

In some regards it has worked, yesterday I had never heard of Anand Desai-Barochia, today I have.

I would delete this thread as he doesn't deserve the publicity.
Comment

There are propper websites set up just for casting actors and models. Any professional casting agencies and advertising agencies would have subscriptions to these and would not be dealing through Craigslist. Also as someone said, there'd have been NDAs about the company and product being identified.
Also, it's in British pounds, duhh.
Comment
B

Craigslist is how they found Justin Long and John Hodgman.
Comment
M

No question this is just something intended to get attention for the actor listed in the IMDB link. Money amount is in pounds, and sure enough, the actor linked looks to be british (most of the credits are BBC and theatre companies in England).

This was either posted by the guy or his agent.
Comment
Z

This is an advert for an advert in LA, and the currency is in GBP?

I am such a sucker. I actually thought this was true.
Comment
F

jmann said:
I would say with almost 100% certainty it is. Many times the Casting Directors when hired by the client (Apple) are required to sign NDAs and are prohibited from listing product or company details when posting the breakdown online for the agents to submit their talent to for auditions.
Click to expand...

Most definitely fake. Every legit actor in Los Angeles (and Apple does usually produce its commercials on the West Coast - I've worked at the production companies and post production facilities Apple employs) knows there is really one centralized on-line casting site used by agents to cast parts. I am a member of that site, and while there is a second on-line site that is also legit, it is still in its infancy compared to the main site. Non-Disclosure Agreements are necessary, and using Craigslist would be insanely unsafe.
Comment

mobile-caffeine said:
The shoot is set for LA (I'm assuming Los Angeles, California) but the payment is in British Pounds. Hmmm....
Click to expand...