Apple is expected to release a redesigned iMac powered by Apple silicon later this year, and ahead of time, developer Dennis Oberhoff has discovered an unreleased ARM-based iMac in an Xcode crash log for his Mac app DaftCloud. 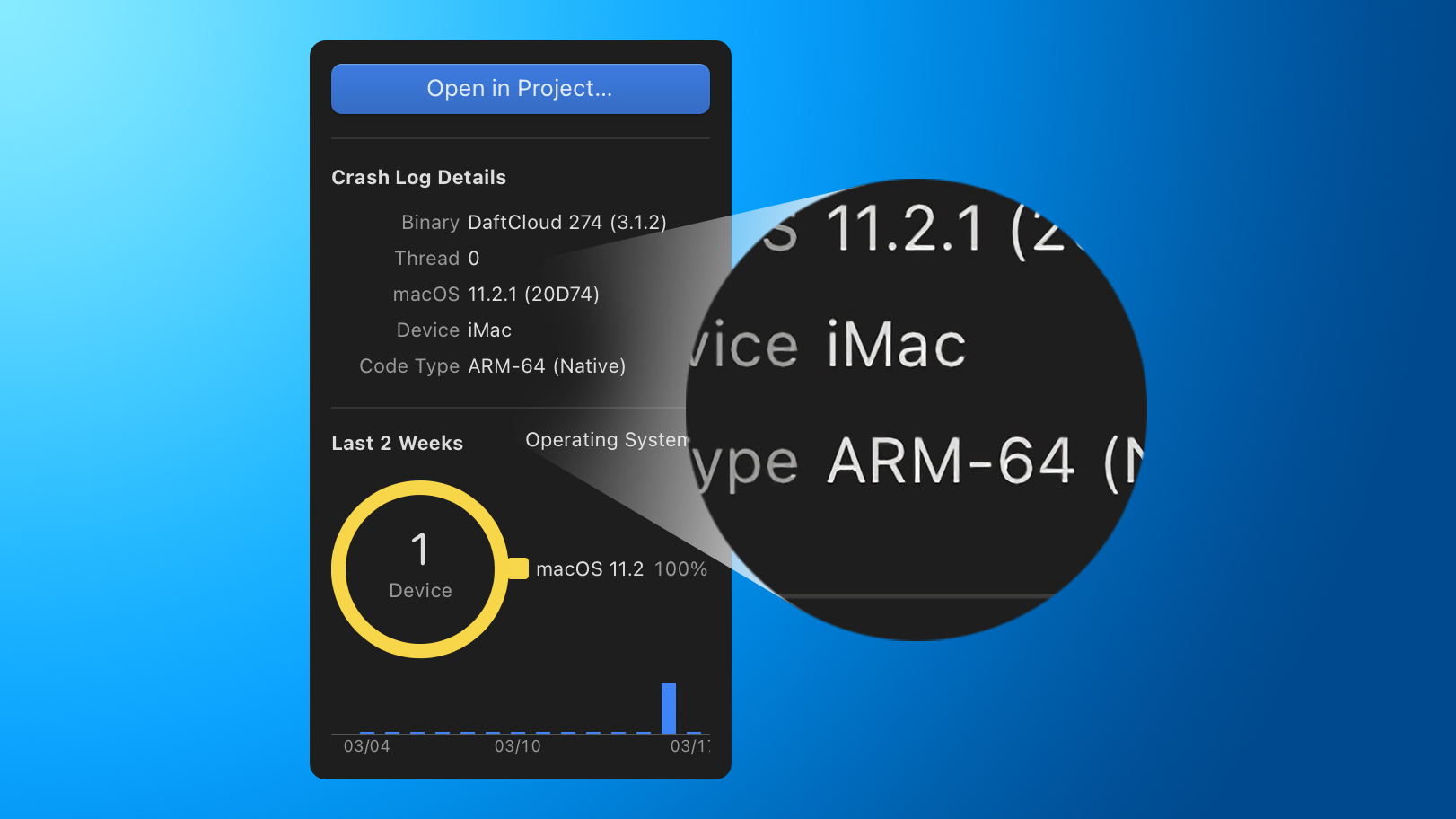 DaftCloud is a third-party macOS desktop app for music sharing website SoundCloud, and it is possible that an Apple engineer was using the app on an Apple silicon iMac prototype, but this is merely speculation. The log indicates that the iMac is running macOS 11.2.1, released in early February, but no further details can be discerned.

Bloomberg's Mark Gurman has previously reported that a redesigned iMac with an Apple silicon chip will be released later this year. Gurman said the new iMac's design will be inspired by Apple's high-end Pro Display XDR, with slimmer bezels around the display, no metal chin below the display, and a flat back.

Earlier this month, Apple announced that the iMac Pro is being discontinued, while 512GB and 1TB SSD upgrade options are currently unavailable for the 21.5-inch iMac.

What analytics tool is that?

I hope that developer has added "may blab on Twitter all about your secret hardware" into his app's privacy policy.
Reactions: peanuts_of_pathos, Born2bwild, Razorpit and 28 others
S

I feel like it’s possible to spoof that sort of thing. But I mean even if an ARM iMac existed that shouldn’t surprise anyone, should it?
Reactions: RalfTheDog, casperes1996, Stella and 5 others

About time, but if we're basing it off a screen capture like this, I can make you an iMac that's running off of a sparc processor and none would be the wiser (or if you believed it, oh man you stupid)
Reactions: georgeoommen, George Dawes, amartinez1660 and 8 others
J

Were they smart and captured device specs in the crash log?
J

I am sure that Apple has been prototyping these internally for quite some time ...
Reactions: Wizzlemane96, amartinez1660, satcomer and 6 others

can't wait
Reactions: bluraycinema, George Dawes, The Barron and 3 others

Suckfest 9001 said:
I feel like it’s possible to spoof that sort of thing. But I mean even if an ARM iMac existed that shouldn’t surprise anyone, should it?
Click to expand...

I would be possible to spoof it. Might take a bit of effort to make it look realistic. But not *that* much effort. I agree, with you though, why bother. It probably is legit because aren't we all expecting such a device to be coming soon?
Reactions: amartinez1660, Suckfest 9001 and apparatchik

sdragon said:
What analytics tool is that?
Click to expand... 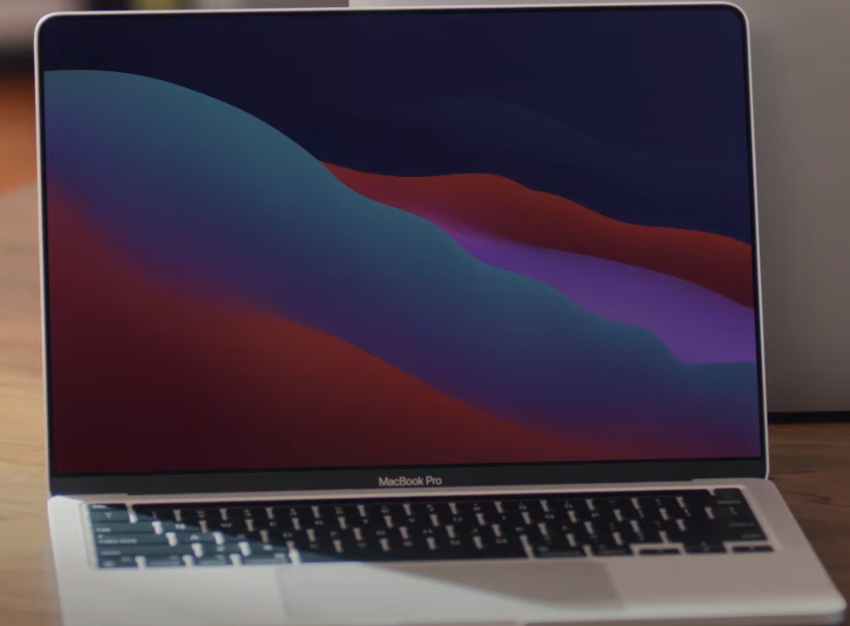 Interesting. Not exactly surprising but interesting none the less.
Reactions: Razorpit and Romeo_Nightfall
A

Its not like Apple didn’t announce they would transition to its in-house silicon within two years (we’re six months into the transition), so, I would expect the next crop of macs to be announced rather soon, with June’s wwdc looking as a probable venue for it.
Reactions: Mike_Trivisonno, Stella and Captain Trips

They are testing a new iMac? What? OMG... oh wait, we already knew they are getting ready for a new iMac.
Reactions: amartinez1660, satcomer, Sebosz and 4 others
T

Didn’t the DTKs refer to themselves as iMacs?

or maybe I just made that up?

We know it's coming, so why would anyone waste their time spoofing this? never mind.. I already know..
A

I think the focus of this news is not really the iMax (which even Apple admitted they were expanding the M1 chip family since its announcement), but the fact that the information somehow managed to slip through in an unusual format like a bug report log in this case.

But then yeah, I do agree it's not surprising at all
Reactions: amartinez1660, ASentientBot and satcomer

Can he extract a little more information from this crash report? RAM size is what bothers me the most!
S

In other news....water is wet.
Reactions: Smooch, Phil B, satcomer and 4 others

I'd be surprised if it were a prototype... at this time I'd think it's more likely a production model.

A 12 year old can photoshop that in under 10 minutes.
Reactions: George Dawes, The Barron and satcomer

Sevenfeet said:
In other news....water is wet.
Click to expand...

Water is in a bottle
Reactions: satcomer and az431

I think this is spoofed from a Hackintosh. You can customize the device profile on a Hackintosh to almost anything.
Reactions: whichweather and amartinez1660

anshuvorty said:
I think this is spoofed from a Hackintosh. You can customize the device profile on a Hackintosh to almost anything.
Click to expand...

Yes almost, but you can’t realistically run ARM64 code on one. Anyway this is not something unique to see crash reports from Apples own testing, so I don’t see why anyone would bother the time to try to spoof or fake something like this. It is not exactly a surprise. The full crash report is however what I would like to see.
Reactions: ASentientBot

sdragon said:
What analytics tool is that?
Click to expand...

That's likely just a crash log that you receive as a developer if your app crashes, and the user has allowed it to send crash logs to Apple. One of the things recorded would be which kind of machine crashed.
You must log in or register to reply here.
Share:
Facebook Twitter Reddit Email Share Link
Register on MacRumors! This sidebar will go away, and you'll see fewer ads.
Sign Up
Top Bottom