Apple and Madonna have teamed up to launch new Today at Apple Music Lab classes where attendees will go hands-on with Crave, a track from Madonna's latest album, and will be able to remix it.

The Today at Apple session will also walk students through deconstructing the song, and there will be details on what inspired her. 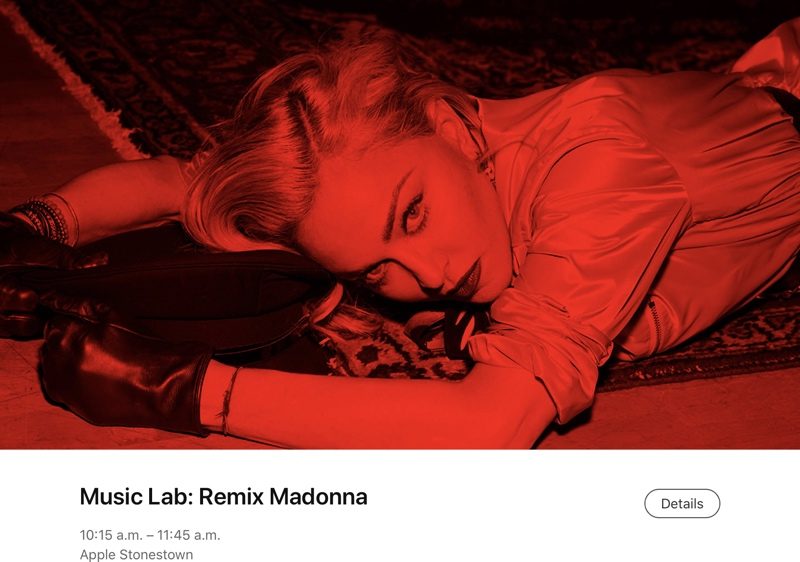 Go behind the making of a hit song featuring your favorite Apple Music artists in this series of Music Lab: Remix sessions. Exclusively in Apple Stores, you'll get hands-on with a track direct from the artist. In this session, you'll deconstruct Madonna's song Crave, find out what inspired her, and create your own version of the song using GarageBand on iPhone. Devices will be provided.
Click to expand...

Madonna shared the news on her Twitter account this morning, and Today at Apple classes for the Music Lab: Remix Madonna are now available. Attendees can book starting now, with classes kicking off a bit later in June.

The Remix Madonna classes are available at Apple Stores in the United States as well as other Apple retail locations around the world.

Apple has also teamed up with other well-known musicians to create Today at Apple Music Lab curricula. There's a Beat Making class co-created with Swizz Beatz, for example.

For a real challenge they should offer the option to remix her Eurovision performance. A fully spec'ed Mac Pro to the first person to make it listenable
Reactions: macribas, appleunderpants, Hirohydo and 44 others

tyr2 said:
For a real challenge they should offer the option to remix her Eurovision performance. A fully spec'ed Mac Pro to the first person to make it listenable
Click to expand...

You made my day
Reactions: chris4565, mixy, jjhny and 4 others

patent10021 said:
At first I thought it was just the red channel, but there seems to be more going on.

Please explain the steps I need to accomplish this.
Click to expand...

Huh. Seems like red channel is the new look?

Oh if only Angela was still around to veto ideas like this to "improve" their retail. Oh wait...
Reactions: freddiebarnes

tyr2 said:
For a real challenge they should offer the option to remix her Eurovision performance. A fully spec'ed Mac Pro to the first person to make it listenable
Click to expand...

They already tried! I went to watch it on YouTube the next day to remind myself if it was as terrible as I remember and there were frequent autotune squeaks to make the melodies slightly in tune.

It still sounds like crap despite the vocal correction.
Reactions: interessiert, martyjmclean, Tivoli_ and 1 other person

What is it with Apple and their terrible Boomer taste? Last time it was inflicting U2 on us.
Reactions: Cameroncafe10a, freddiebarnes, appleunderpants and 28 others
U

Another training session for the 1% of the 1% of the 1% of us even remotely interested. I guess that makes about 200 people in the US which means there will be one attendee at half the sessions at the Apple Store.
I thought Angela was no longer here! When are they going to stop the madness? (Deidre, I’m looking at you!)
How about teaching people how to use the damn iPhone or iPad or Watch or Mac?!?
Reactions: femike, gr8hii, Jmausmuc and 6 others

If she went on tour, she’d sell out every major city.
Reactions: Le_petitcastor, Teammm, xalea and 10 others
R

Say what you want, but she played Pantera's "A New Level in front of thousands of people who'd never heard a heavy riff before in their lives:


...even if it wasn't terribly well.
Reactions: xalea, airbatross and Antes

The one who wants to blow up the White House? No thanks.
Reactions: freddiebarnes, alvindarkness, femike and 18 others
R

She's going on tour from September 2019 to March 2020. All days sold out.
So... Yes, she's still relevant. More so than any other pop artist.
Reactions: thekaiju, airbatross, RoobyRoobyRoo and 7 others
B

I rest my case.
Reactions: airbatross, RoobyRoobyRoo, Antes and 4 others
J

Thats what I thought until I looked at sales. She is still killing it world wide despite no one listening to it in America that I can imagine. But apparently lots of people still interested.
Reactions: RoobyRoobyRoo

Unlike the others I say she was/is still relevant, but hopefully she will do a (MUCH) better job than her performance on the Eurosongfestival, any singer in that contest did far better than she did.
Maybe it was just a fluke, not feeling well or she's (Her voice) getting too old, but hat of for a what..60 year old.
T

I finally realized what was missing in my life. Madonna!
R

Cool story, but you aren't the target audience.

A bit like the Mac Pro haters. Not EVERYTHING is designed to be for you.

I'm not a Madonna fan, but I am smart enough to know there are TONS of fans because as long as she's alive, there are PLENTY of people around her age that like her.
Reactions: diego, CarlJ, xalea and 14 others
G

jimbobb24 said:
Thats what I thought until I looked at sales. She is still killing it world wide despite no one listening to it in America that I can imagine. But apparently lots of people still interested.
Click to expand...

Her new album is currently no.1 in America.. and 57 other countries...
Reactions: jasonpall, xalea, MadAngelUK and 2 others

The blatant misogyny on this forum is absolutely appalling almost any time a woman is mentioned. It's utterly laughable that there are comments about Angela Ahrendts (two so far) when she wasn't mentioned whatsoever in the article (and the irony of people saying "If I criticize Ahrendts I'm immediately labelled as a misogynist!!!!!!!!!" isn't lost on me after threads like this).

This is a free session presented by Apple featuring music by a pop legend (whose tour is sold out and album at number 1, as indicated above, for those of you doubting her relevance).
If you don't like it, avoid buying your lightning cable that day and scroll on.
Reactions: diego, Le_petitcastor, jasonpall and 17 others

You're in your sixties. Sheesh...