AppleInsider reports that Apple may be preparing to begin supporting 1080p movies in its iTunes Store later this year, based on reports of film studios submitting films to Apple in a new "HD+" format at the higher resolution.

Thus far, 1080p HD content has largely eluded users of Apple products, with HD versions of videos on the company's digital download service maxing out 720p (1280x720) and chief executive Steve Jobs balking at adoption of Blu-ray on Macs due to licensing complications and other challenges that he said threatened to translate into a "bag of hurt."

But that could begin to change later this year, as a handful of feature films being submitted to the iTunes store for a release in the September and October timeframe are being sent with documentation for an optional 1920x1080 resolution, according to people familiar with the matter.
Click to expand...

According to the source, at least three of the five largest movie studios have submitted titles scheduled for fall releases with optional resolutions of 1920x1080 at average bitrates of 10 Mbps. 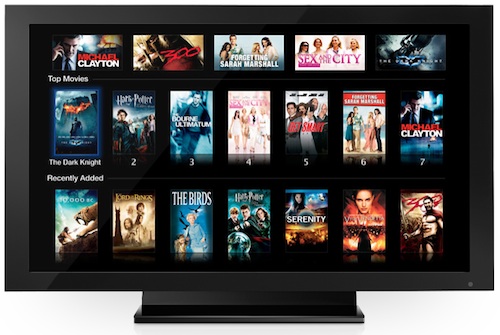 The report's sources also point to rumors of an updated 1080p-capable Apple TV, which lines up nicely with increased 1080p support in iOS 5, which is due for release around the same September timeframe. Those improved capabilities were noted last month to have opened the door to a true 1080p Apple TV.

Apple is said to have the capability to stream 1080p video already in hand, but that the company remains concerned that many users' personal connection speeds aren't yet high enough to support streaming of the "HD+" content without significant buffering time.

In order to address that issue, Apple could offer the 1080p only for downloadable movie content, although that would be incompatible with the simplicity of the Apple TV, which offers only limited storage space for caching purposes and otherwise streams all content. Alternatively, Apple could make the 1080p content available for streaming only if a user's connection is determined to be fast enough to support the bandwidth.

That would be nice... There are virtually no devices that can't play 1080p video at this point. It's silly to still be at 720.

It's not HD+. 1080P has been part of the HD standard for over a decade. Don't make it look like you're lagging digital content is somehow now better, you've only just now caught up to the competition.

That would be very nice.

Hopefully they allow purchases, along with rentals.
M

So... better late than never?

That's around 7GB for a 90 minute feature. Not too bad. I've held off on the Apple TV with only 720p support. I'll consider it when it can support at least 1080p.

Can the US's infrastructure handle everyone downloading or streaming HD video? Compared to other places in the world our internet is 2nd rate. The new bandwidth restrictions many ISPs are placing on there customers will also add challenges and expenses for people.

chrmjenkins said:
It's not HD+. 1080P has been part of the HD standard for over a decade. Don't make it look like you're lagging digital content is somehow now better, you've only just now caught up to the competition.
Click to expand...

What competition? Who (aside from torrent sites) currently offers 1080p movies for streaming or download?
S

...my viewing habits are perfectly satisfied with PSN and Zune marketplace, which both offer 1080p for years.

A Blu-Ray-equipped Mini could change the deal...but will never see the light of day.

So no Mac in my livingroom.

And what about sound? I don't think we're getting TrueHD or DTS-HD any time soon. For people who care about this sort of thing, round pieces of plastic have a few more years without any real competition (besides piracy of course, good job studios).

Hope they will add closed captions, too. The only thing Apple cared about is the mass audiences than the small percentage of disability people.
4

I want the Movie store in Scandinavia first , it is crazy Scandinavia is one of the parts of the world with very high internet connection speed yet we still can't stream movies (legally)
P

RobQuads said:
Still a mile away from the 30/40Mbps that you get on BluRays
Click to expand...

with a good quality encode, you can easily compress a Blu-ray title to 10-15Mbps with little quality loss depending on the size of your television. I'm going to throw a statistic out of my ass and say 98% of people wouldn't be able to tell the difference. Again, the key is good quality encode.

That's not to say Blu-ray is overkill or bloated. It's great quality, but it can still be compressed further with negligible quality loss.

I assume 1080p downloads will be free to those people who have already paid for the 720p version of the same movie?

Given that some of them now are the same price to download in 720p as they are to actually buy a physical BluRay disc. They can't ask for a further payment can they ?

I'm of the opinion that movies should be streamed. Personally, I tend to watch a movie once, then maybe watch it again a few months later. It doesn't seem so advantageous to have a local copy, and like you said, we'd run out of space since movies can easily be gigabytes each at 1080p. Then there's the issue of downloading over 3G... One movie per month?...
D

Consultant said:
That would be nice but bandwidth and storage requirements of 1080p content is just huge
Click to expand...

I know my DSL connection could not handle it, I would need to pay a lot more for a faster DSL connection. Cable is not an option for me because it tops out at about 2MBs in my neighborhood.

res1233 said:
I'm of the opinion that movies should be streamed. Personally, I tend to watch a movie once, then maybe watch it again a few months later. It doesn't seem so advantageous to have a local copy, and like you said, we'd run out of space since movies can easily be gigabytes each at 1080p.
Click to expand...

If I am going to watch a movie once. I would rather get it for free.

I have not purchased video media in ages since I am only going to watch it once anyways.

I'll just stick with my DVDs and Blu-Rays. Its nice to buy a movie on iTunes and not have any ADs when starting up the movie, but to have your movie locked to only Apple Devices sounds like a pain.
You must log in or register to reply here.
Share:
Facebook Twitter Reddit Email Link
Register on MacRumors! This sidebar will go away, and you'll see fewer ads.
Sign Up
Top Bottom