I have a 2010 nano that I havent touched in many years. I charged it up recently, it works great and re-living the music i listened to then brought back some memories. RIP nano!
Reactions: viss and LizKat

The Nano has always been great but one negative: because the 6th gen was so small, my brother lost his lol
J

I still use my first-gen iPod Shuffle every day. It’s plugged into the top of a pair of speakers and plays a continuous loop of over an hour of white noise.

Wish Apple would update the things so they could play songs gapless. (That’s me being facetious.) (Tho it would be nice.) (But it’d never happen.) (Anyway…)

A shame these won’t exist anymore. I loved my first gen and would definitely get one for each of my kids in a while. They like music but have no need for the added features of an iPod touch.
H

The 4th Gen was a beautiful little device. I think my son probably still has it (in blue), though he tends to use higher-capacity players these days.

If they re-issued that one with a decent capacity I'd buy it for sure. But of course that wouldn't sell them any wireless headphones, apps or music subscriptions, so doesn't fit the current business.

I have a 7a Gen nano, its so small and portable, I used it daily until 2018 I think, I would've used it to this day if it had more storage than 16gb. Nowadays I use a Sony walkman NWA45 with 128gb, there is a market for dedicated music players and I would buy a new ipod classic without regrets if apple decided to launch one.

I still remember watching that video where Steve Jobs pulls out the first gen from a tiny pocket. Instantly wanted one (and loved it).

tegranjeet said:
6th generation iPod nano was the original Apple Watch. I burned through three of them because I liked using them while running. I had some great watch cases for the device.
Click to expand...

Yep, I knew immediately when it came out, that an Apple watch wasn't too far behind.

I prefer the square design of the nano though; I find the current watch a bit feminine for my taste.

Something like this with Apple's clever watchband design would be cool if they sold it alongside the current model's design (for those who prefer that design instead). 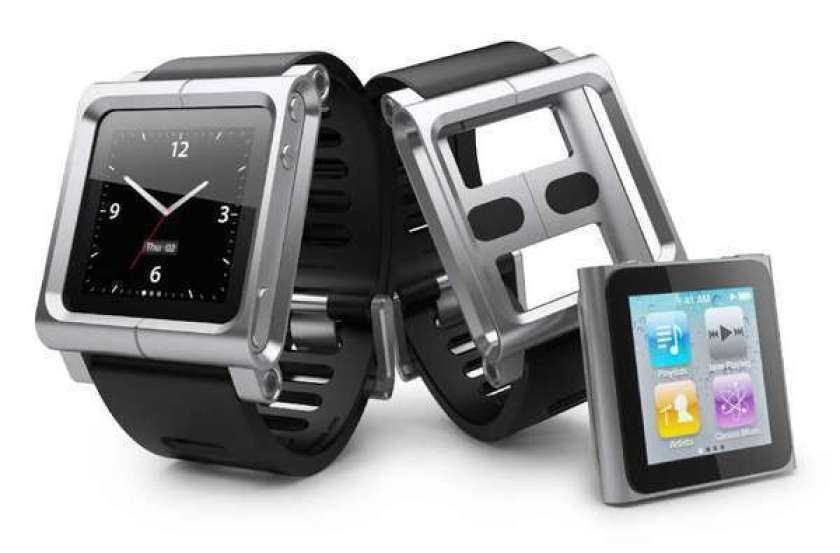 Love my 2nd, 6th, 7th gen nanos and my shuffles, still use most of them at least a little during most weeks. They may be vintage class now, but there are still plenty times when all I need is access to some old favorite playlists, or FM radio in the case of the 6th and 7th gen ones. So these practically indestructible little gems still fill the bill after all these years. I keep some parked in 30-pin speaker-docks in a couple rooms where I don't think to bring an iPad or iPhone.

Don1985 said:
Did these ever support Bluetooth?

If they released one that did, I’d be interested solely for workouts. I guess Apple Watch is a better cash cow for that.
Click to expand...

Yes, the last generation has Bluetooth.


I wish they allowed the transfer of downloaded Apple Music to these, I would probably still use it. I like the iPod because it does one thing really well with no distractions. I don’t think there is a large enough market space right now for a new generation of iPod unfortunately. I always thought it would be cool for Apple to release a new iPod called the Omega and have a high end DAC with tons of storage, AirPlay 2 compatibility and iOS syncing. The final iPod, let it go out with a bang. Unfortunately, there’s no market for the iPod anymore. It’s only a matter of time before the iPod Touch is gone and the iPod will most likely go away with no mention, just like Mac OS X.
S

dannyyankou said:
Apple Watch has kinda become the ultimate replacement if you think about it.
Click to expand...

The writing was on the wall when 3rd party companies made straps that effectively made the 6th gen iPod nano into a watch.

While the Apple Watch does many things, I still find button based iPods better for running. Heck even an iPod Shuffle is perfect for quickly navigating with buttons.

I had the first gen. I actually found it on the ground somewhere.

satchmo said:
The writing was on the wall when 3rd party companies made straps that effectively made the 6th gen iPod nano into a watch.

While the Apple Watch does many things, I still find button based iPods better for running. Heck even an iPod Shuffle is perfect for quickly navigating with buttons.
Click to expand...

AirPods are good for skipping tracks, but it can be awkward pressing them in the middle of a run.
K

Actually, my first one still does.

But the more complicated and expensive iPhones I replaced them with are full of bugs, which Apple seems to ignore while they make TV shows and other stuff. Like money. Apple makes tons of money.
M

krazzix said:
I had the first gen. I actually found it on the ground somewhere.
Click to expand...

One reason why I dislike my ex-gf, she made me throw away my 1st gen nano box and special shopping bag.
Reactions: phenste
P

First iPod (2nd gen, specifically). Eventually upgraded to 3rd gen, LOVED the ever-polarizing ”fat” design as a music video nerd. Was my first taste of what was to come with iPhone-sized screens (I know it technically came out after iPhone 2G, leave me alone). Will forever have a special place in my heart.
S

Feeling nostalgic, just connected my 7th gen nano to my AirPods Pro. (Had to use the button on the back of the case.) Delightful.

It’s a shame it’s not possible to upgrade the storage in the Nanos. I’ve upgraded my iPod Classic 7th Gen with 750GB of storage and it gets constant use.
Reactions: LizKat

The 6th Generation was my favorite iPod ever. The size beat out the iPod Classic for my everyday carry iPod.
M

Besides the money thing, that Apple's most popular product sells for, in some cases, 10x what an iPod sold for, I don't understand why Apple doesn't make a non-touch iPod that plays apple music.

I feel like there's tons of people, like me, who prefer to play music at home and work not from their iPhone. What I end up doing is keeping an old iPhone and iPad and pretty much only use them to play music.
Even though that market isn't as large as it was before, since everyone who wanted to listen to music had to use an iPod to do it, there's still plenty of "home listening" markets that are probably doing what I'm doing, but would be happy to shell out an extra $150 every couple years.

Also exercising. Still at the gym, I don't exercise with my primary phone because I don't want a text or call during my workout. So again, an old iPhone or iPod is what accompanies me. Something small and light that I can change tracks without looking is what I desire.
Reactions: LizKat
9

And Apple no longer has any low-priced fun gadget to sell.
Last edited: Sep 2, 2020
Reactions: macsound1, dickie001x and LizKat
M

98winds said:
And Apple no longer has any low-priced fun gadget to sell.
Click to expand...

Those dongles can be kinda fun. Like an erector set, chaining them all together to make something work!
Reactions: LizKat
V

macsound1 said:
Those dongles can be kinda fun. Like an erector set, chaining them all together to make something work!
Click to expand...