Apple to Release New MacBook Pro and Air as Early as October, AMD iMacs and 5K Display With LG Also in Works

Apple is planning to refresh its Mac lineup, including the MacBook Pro and MacBook Air, as early as October, according to Bloomberg. The report also claims Apple is working on a standalone 5K display in partnership with LG Electronics, while it plans to update iMac models with an option for new graphics chips from AMD.

The report reiterates that the new MacBook Pro will be thinner and include an OLED-based touchscreen strip along the top of the flatter keyboard, which will present functions that dynamically fit the current task or application, as well as integrate Touch ID to enable users to quickly log in using their fingerprint.

For example, if a user is on their desktop, the screen will show a virtual representation of the standard function row, which includes brightness and media controls. When in an application, the virtual row will show options specific to the task at hand, but volume controls and a switch to show the default functions will always be present.
Click to expand...

Apple has reportedly named the feature "Dynamic Function Row" internally, but its official name may differ when announced.

The tweaked MacBook Air models, meanwhile, are said to include multipurpose USB-C ports, which makes the inclusion of Thunderbolt 3 a possibility. No other details were shared about the planned MacBook Air and iMac refreshes.

Apple's plans to work with LG on a standalone 5K display surface two months after it discontinued the five-year-old Thunderbolt Display. It remains unclear if the monitor will be based upon the Retina 5K iMac, and it is also unclear if the report's broad late 2016 timeframe for "some of the new Mac products" includes the display.

The report makes it nearly certain that the focus of Apple's just-announced September 7 media event will be on the iPhone 7 and the second-generation Apple Watch, the latter of which has now been confirmed for the event. Apple will also provide updates about its software, including iOS 10, macOS Sierra, watchOS 3, and tvOS 10.

Magnificent! Maybe I can upgrade from my 2011 model! I hope the new MacBook Pro designs add some sweet features!

I am a little confused on keeping the MacBook Air lineup though, does it seem like there is a lot of overlap with the MacBook lineup currently?
Reactions: ex0dus1985, Avieshek, d0nK and 5 others
Comment
D

I think it goes without saying that the in-display touch-ID on the new MacBook will carry over to the 2017 iPhone.
Reactions: Avieshek and kerrikins
Comment
J

I've always been an Air kind of guy, but it may be time to give the Pro a shot.
Reactions: Avieshek
Comment

This is going to be an expensive Holiday for me: 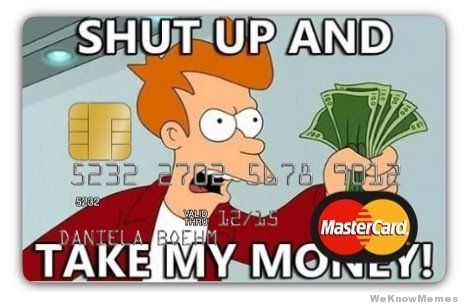 This is something I'm really looking forward to seeing, this year.
Reactions: jujufreeze, MacsRgr8, jjhny and 12 others
Comment

I literally laughed out loud when I read that....
Reactions: jeabraham, ryanwarsaw, brandonboo20 and 20 others
Comment

I really don't see this happening, not if Thunderbolt 3 will be included, as, that requires the Intel processor that has just been released, perhaps we will see other changes, but, TB3 won't be in laptops b4 next year.

Now, there is a new processor that could be put in the Mac Pro, so, we may see an update for the Mac Pro including TB3 late Q4 this year.

In any case, we probably won't see an event for another month after the iPhone event.
Reactions: Tazzon77
Comment
X

Sell AMD if you want but the day Apple stops offering an Intel version I am done.

EDIT: Okay I'm an idiot and didn't read that it was for the GPU. I jumped to the conclusion that they'd offer AMD CPU option. Whew!
Last edited: Aug 29, 2016
Reactions: RedRaven571, Gudi, DotCom2 and 1 other person
Comment

Well, that's about it for the Kaby Lake rumours. So sad - the long awaited rMBP will be outdated within 3 months...
I do wonder whether the MacBook Air refresh will feature Kaby Lake as the 15 W chips are shipping to customers.
Reactions: Keniutek, JackANSI, Hank Carter and 1 other person
Comment
D

AMD is for graphics chips... I don't see Apple switching to AMD for the main processor. Unless of course AMD starts fabricating custom ARM SOCs for Apple.
Reactions: Sasparilla and QCassidy352
Comment

Pretty sure they mean AMD GPUs, not processors.
Comment

Might as well wait for those Intel ARM chips to make their way into the Mac. They'll probably include modifications that makes it easier to emulate legacy code. I'm also looking forward to those double capacity lithium batteries that could come out as soon as next year with minimal production line changes.
Comment

What's going to set the Air apart from the Pro and the MacBook? It seems like they are all getting more and more similar. I still find it hard to believe in the continuance of the tripartite MacBook lineup.

And I guess no dGPU in the Pro then?
Reactions: racingbull, XTheLancerX and pondhopper
Comment
D

All they need to do to the Air is update to Retina screen and add USB-C.

I REALLY hope they don't update the keyboard to the plastic-ey/shallow/crap keyboard found on the new Macbooks.
Reactions: Ankaa, Aston441, kellyjdrummer and 14 others
Comment

Hopefully Apple can deliver the goods. Please, decent storage options and not too crazy a price hike.
Reactions: jdickey, Three141, sideshowuniqueuser and 3 others
Comment

Seriously...this is like Star Trek....where no man has gone before.
Reactions: jeabraham, The Captain, Three141 and 8 others
Comment
D

IT says AMD for "Graphics" not the processor
Comment

So an October hardware event is happening. Bring it on. I'm sure it'll be a smaller venue, but who cares?