Apple TV 4K: How to Stream Audio From Your TV's Inputs to HomePod (eARC)

The new second-generation Apple TV 4K is capable of relaying audio from a compatible TV to a HomePod – even when you're not using your Apple TV. This allows you to stream audio from a TV-connected game console or other set-top box straight to Apple's smart speakers. Keep reading to learn more and how to set it up. 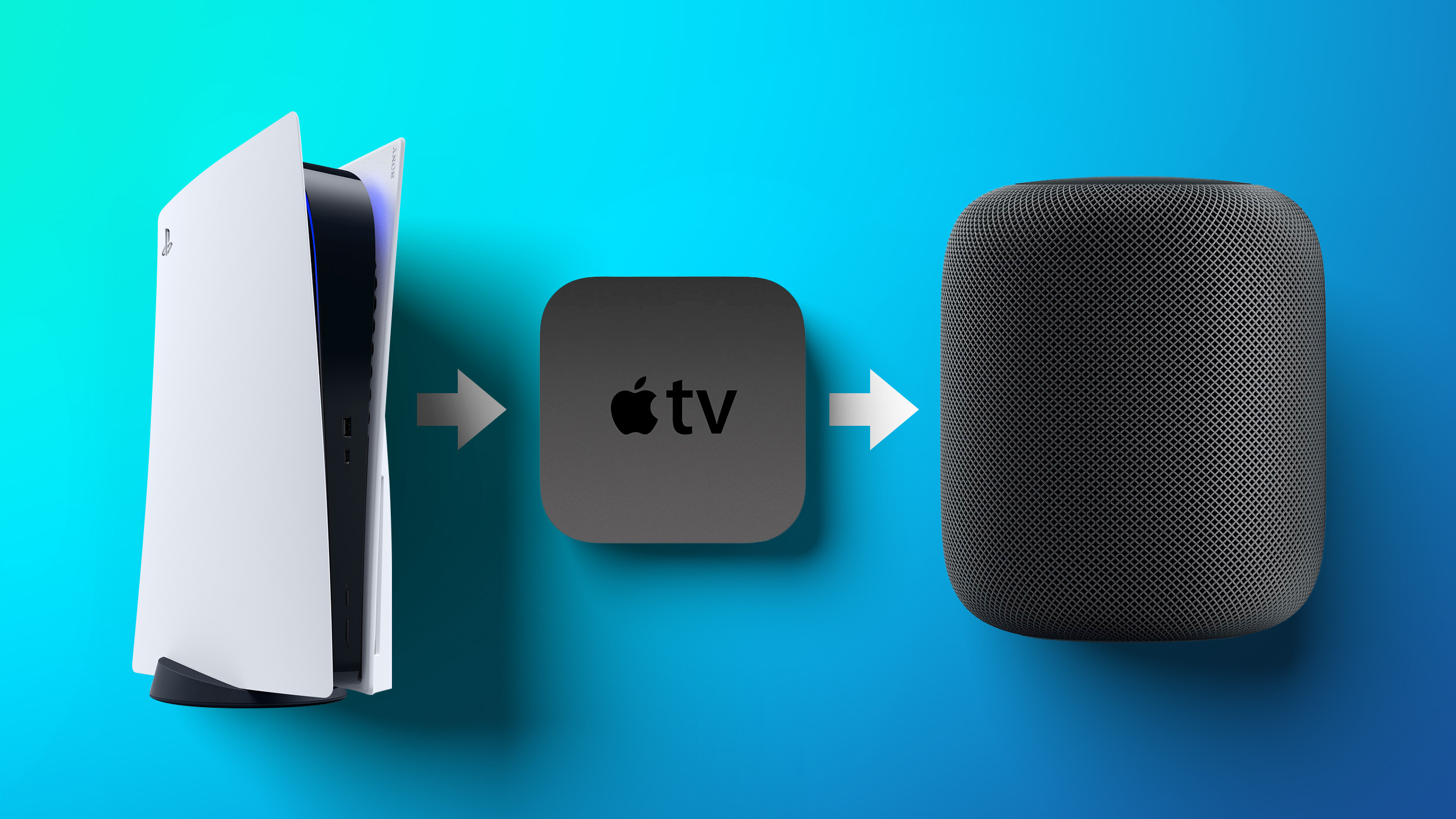 The new Apple TV 4K supports two additional connection standards, called ARC and eARC. ARC (Audio Return Channel) is a feature of HDMI 1.4 that enables audio from a device to be sent to a compatible TV and relayed through its HDMI port to a separate audio receiver, speaker, or sound bar. eARC (enhanced ARC) meanwhile adds support for the passthrough of higher bandwidth audio like Dolby Atmos, as well as 5.1 and 7.1 surround sound.

For Apple TV 4K, ARC and eARC support effectively allows a HomePod or stereo-paired Homepods in a Home Theater Audio setup to play audio from other TV-connected devices like a cable box, PS5, or Xbox Series X. The following steps show you how to get it set up.

Note that the feature only works with the original, discontinued HomePod – the newer HomePod mini is not supported at this time. Also, make sure that your TV supports ARC or eARC. You can check if it does by seeing if there's an ARC label next to your HDMI port, or try contacting the TV manufacturer. 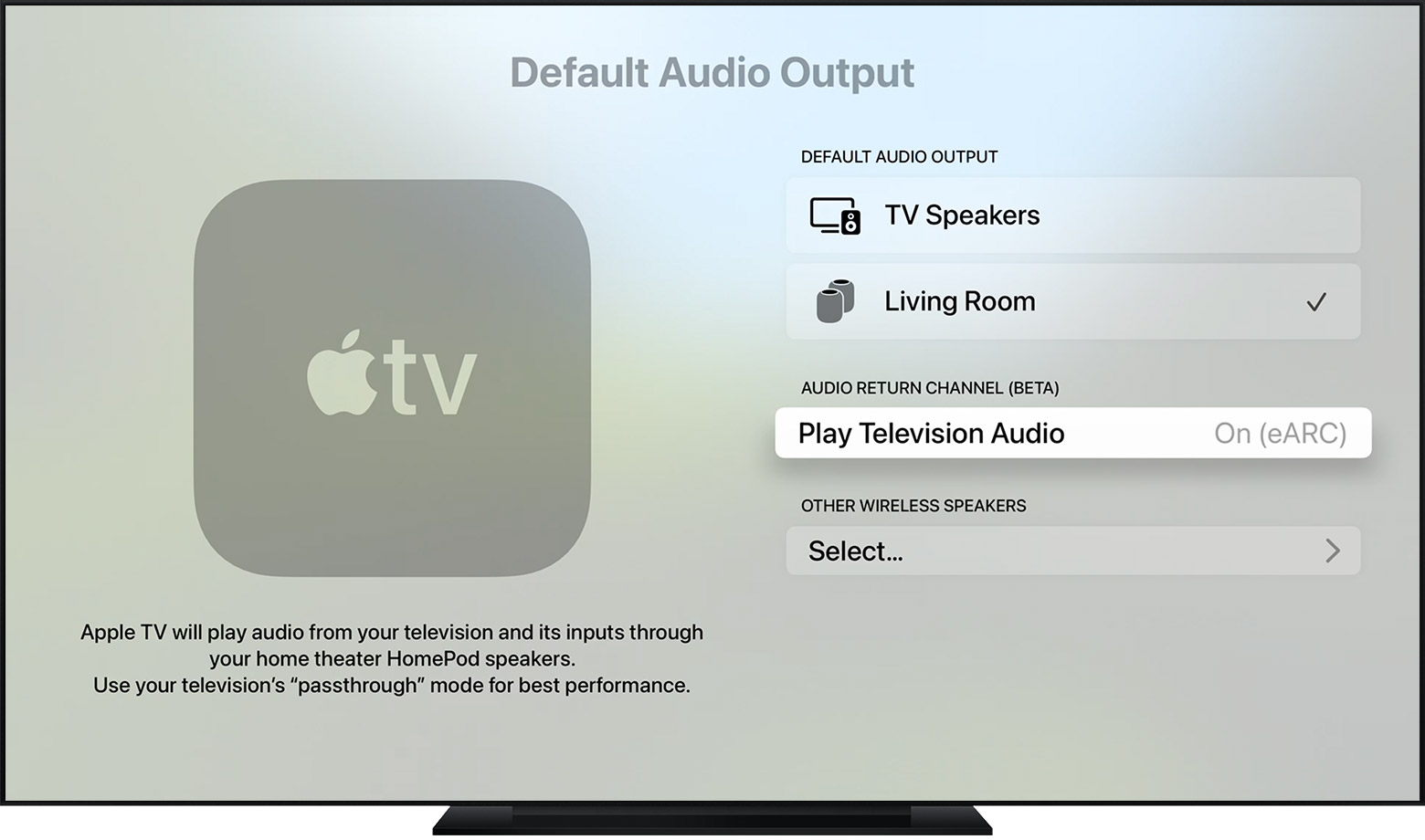 If ARC or eARC doesn't work for you after following the above steps, check whether you need to turn on ARC, eARC, or HDMI-CEC in the settings of your TV.

Article Link: Apple TV 4K: How to Stream Audio From Your TV's Inputs to HomePod (eARC)

Apple made such a horrible mess of their home strategy. They should have kept the HomePod until a successor was ready. Even if it takes some years. Because the current situation is just embarrassing.

They could even have taken action to drive up sales like lowering the price and adding new features such as this one. I’m sure this would convince some users to use dual Homepods for their TV’s. Spatial Audio could have been another boost.
Reactions: tranceking26, 1961templar, CPTmom2wp and 21 others
D

You know something’s not quite right when Apple keeps releasing new features for discontinued hardware.
Reactions: 1961templar, peanuts_of_pathos, bilbo--baggins and 17 others
D

This is a major new feature that will add value if it works well. Also a head scratcher that they discontinued the HomePod and then created this feature that works with it? It suggests that they will release a successor to the HomePod at some point? Strange, but welcome move.
Reactions: 1961templar, MhaelK, ascender and 8 others
J

If it’s like the current set up with the HomePod playing the audio from Apple TV expect frequent disconnections, the HomePod to instead play random music that was on your iPhone a few weeks ago, randomly switch off the AppleTV music, etc. with fiddling you can always get it to work. Just remember never use the HomePod for anything else or it will take another 5 minutes to get it reconnected. Usually it will only take 3.
Reactions: Numbah One, subjonas, linkmaster02 and 4 others
S

Is there any genuine technical reason why this shouldn't work with HomePod Mini, or was it just an attempt to upsell us to a product that no longer exists?
Reactions: peanuts_of_pathos, EL-P, seatton and 1 other person

This is great news. It'd be even better if HomePod hadn't been discontinued or Apple had announced HomePod 2.

As it is I'm likely moving to a smaller house so I may consider selling my Denon/B&W/KEF kit and just going full eArc/HomePod.

Yes, yes I know it'll be no comparison but size might just matter?
Reactions: peanuts_of_pathos, DeepIn2U and Spock1234

Is there any noticeable latency with routing the audio like this?
Reactions: peanuts_of_pathos, Nimoy, BeefCake 15 and 3 others
0

Strange... we have better sound and now a way to get audio from other TV sources to the HomePod. Hmmm.. Maybe if they had taken this kind of interest before they discontinued it.. Actually, they could have put one input on the thing at the beginning.
Reactions: 1961templar, geeb1234, hagar and 3 others
S

Or you could just buy a Sonos Beam sound bar (that supports ARC, Alexa, Google Home) and be done with it.
Reactions: geeb1234, peanuts_of_pathos and DeepIn2U
V

ARC is audio return channel and eARC is the enhanced version of it. So essentially the Apple TV can now function as your A/V receiver so if you have a console or other device connected to your tv, it will send the audio to HomePod's connected to the Apple TV 4K
Reactions: peanuts_of_pathos, MacPro 2018, jhollington and 2 others

Damn... This is gonna make me have to upgrade mine from the 4K model now for my HomePods. My remote has only arrived today haha.
Reactions: Antes
S

I was wondering the exact same thing, as my Apple TV HD and Apple TV 4K can also play to my A/V receiver.

I think what this article is trying to say is that the Apple TV itself can be the A/V receiver for PS5/Xbox/Switch etc through eARC.
Reactions: rezwits, peanuts_of_pathos, dazzlingirl and 1 other person
N

Thanks to Macrumors for pointing this out. This is a game changer.

New AppleTV 4K 2nd Gen just arrived and now I will also be able to hear the TV sound on Stereo HomePods!!

All that is left for Apple to do now, is to be able to add multiple HomePod minis all around the room for even greater sound! Please!!
Reactions: rezwits, peanuts_of_pathos, dazzlingirl and 1 other person
M

Your A/V receiver is probably plugged into the HDMI ARC/eARC or optical port on your TV to relay audio from other sources.
Reactions: peanuts_of_pathos and Braderunner
0

Scipster said:
I was wondering the exact same thing, as my Apple TV HD and Apple TV 4K can also play to my A/V receiver.

I think what this article is trying to say is that the Apple TV itself can be the A/V receiver for PS5/Xbox/Switch etc through eARC.
Click to expand...

Ahhh ok, I see the subtle difference there. Appreciate the response.
Reactions: amartinez1660, peanuts_of_pathos, dazzlingirl and 1 other person
S

Presumably, because your gen 1 was just sending sound output to your TV which did support ARC, and the TV was relaying to your receiver which also supported it. The gen 2 can now work the other way around, and receive audio input from other devices connected to your TV and relay that to a HomePod (or two).
Reactions: peanuts_of_pathos, DeepIn2U, Spock1234 and 1 other person
0

vc2020 said:
ARC is audio return channel and eARC is the enhanced version of it. So essentially the Apple TV can now function as your A/V receiver so if you have a console or other device connected to your tv, it will send the audio to HomePod's connected to the Apple TV 4K
Click to expand...

Ok ok, appreciate the response !!
Reactions: peanuts_of_pathos and iSayuSay
I

Stream from your TV's >inputs<?
Reactions: rezwits
A

I might just get one to test this out with my OG homepod pair to use with my PS5.
I’m thinking latency might be a problem. Sometimes they go out of sync when watching YouTube tv and I skip forward too much.
Reactions: DeepIn2U
0

So correct me if I’m wrong, the whole purpose of this new arc/eArc support is to get other devices to play audio on a HomePod, correct? Nothing to do with plying audio on an A/V receiver, correct?
Reactions: peanuts_of_pathos
S

What an embarrassment coming from Apple. Introduce a well needed feature that only works with a discontinued product and is not supported by the existing HomePod Mini. WTF???
Reactions: 1961templar, somnolentsurfer, seatton and 1 other person

Does this mean that you can use both homepods and tv speakers for regular broadcast tv (in sync) or do you have to choose one or the other?
Reactions: ldj3 and Macyourdayy
You must log in or register to reply here.
Share:
Facebook Twitter Reddit Email Share Link
Register on MacRumors! This sidebar will go away, and you'll see fewer ads.
Sign Up
Top Bottom