With customers around the world beginning to receive their new Apple TVs over the coming days, developers have been busy readying the first apps and games for the set-top box. Below, we have rounded up some of the more interesting tvOS apps that are or will be available through the App Store on the new Apple TV. Some apps are still under review and may not be available immediately at launch. 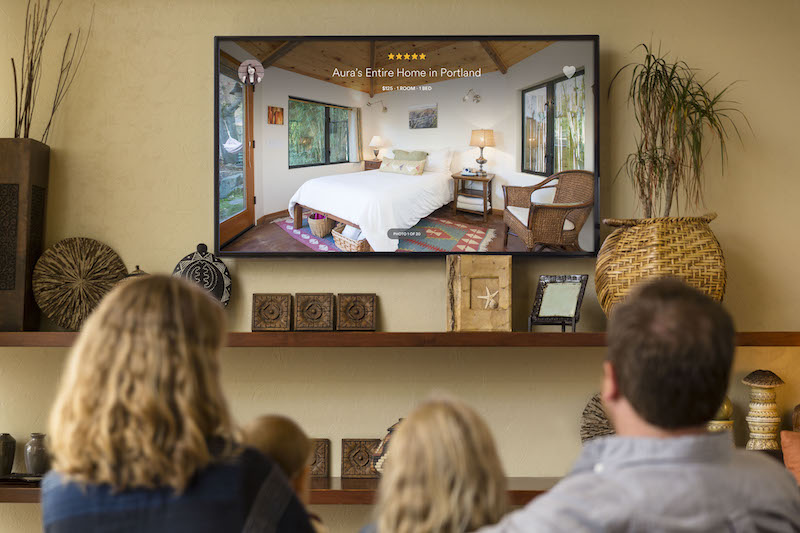 Airbnb, a website for people to list, find and rent lodging in 190 countries, ranging from a New York City studio apartment to a Tokyo penthouse, has developed an app for the new Apple TV that lets travelers swipe through destinations and lodging choices using the Siri Remote. Airbnb for Apple TV focuses on immersive pictures with limited text. Listings can be synced with iPhone and iPad. 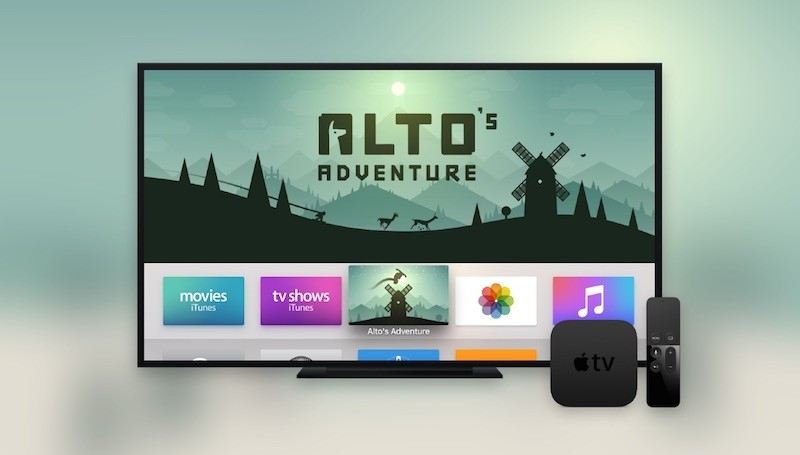 Snowman has announced that Alto's Adventure, a beautiful endless runner snowboarding game featuring physics-based gameplay, procedurally generated terrain, fully dynamic lighting and weather effects, six unique snowboarders and more, will be available on the new Apple TV shortly following its launch. The game can be played with a Siri Remote or a third-party controller, and universally supports the iPhone, iPad and Apple TV for $2.99 on the App Store with iCloud syncing.


Hipster Whale has brought its endless arcade hopper Crossy Road, an Apple Design Award Winner at WWDC 2015, to the new Apple TV. Choose from characters such as Chicken, Mallard, Emo Goose and Giddy Goat, and use the Siri Remote touchpad to dodge cars, leap across logs and jump past fast-moving trains. The popular game is also available on iTunes for iPhone, iPad, Android and Windows Phone.


Mr Jump is a popular platformer runner game where you guide a hero named Mr. Jump as he jumps his way through several increasingly challenging levels in multiple worlds. The new Apple TV version of the game requires the Siri Remote to control your character. Mr Jump is free on the App Store with in-app purchases available.

Here's a video preview of our tvOS Speedtest app that should be available shortly on the Apple TV App Store pic.twitter.com/qqrI7TOIX3 - Ookla (@Ookla) October 27, 2015
Click to expand...

Ookla has developed a version of its popular Speedtest tool for the new Apple TV, allowing users to test their Wi-Fi network's download and upload speeds from their TV set. The app has a simplistic design that displays your internet service provider alongside a scrollable list of servers to choose from. Ookla plans on adopting a similar design for its iOS and Android apps in 2016.

Alto's Adventure will be fun on the big screen.

Plex for iOS or Android is a free app but almost all of it's features are not. What about Apple TV?
Comment
K

This is good. I like the Withings home app and cameras. I only wished that they'd add external cameras to their line up.
Comment

The Withings app looks cool. It'd be great to have it up on the big screen at the office so I could monitor four home cams at once. I guess I need to learn more abut Plex; so many people here have been waiting a long time for it to come to the AppleTV. Lastly, and a little off topic, I hope OOKLA SpeedTest eventually starts rolling their ip addresses. I don't want Comcast to start giving their servers priority so it appears that my connection is better than it actually is...
Comment
J

At least Hipster Whale has an appropriate name.....take something old (Frogger) and pass it off as new and original.
Reactions: Boatboy24, 2010mini, Oblivious.Robot and 1 other person
Comment

Stop calling it a "set top box". There aren't any television sets that you can put these things on top of.
Reactions: rbrian, appledefenceforce, Supacon and 5 others
Comment
C

jdillings said:
At least Hipster Whale has an appropriate name.....take something old (Frogger) and pass it off as new and original.
Click to expand...

But you and I didnt do it though did we?
Reactions: FightTheFuture, appledefenceforce, Karma*Police and 1 other person
Comment
A

Plex has been rejected two times... As of now, it is on the third round of review (source: plex forum visible for PlexPass member only)
Last edited: Oct 30, 2015
Reactions: arn
Comment
C

$279 Australian for what? Until there are a million apps on this it isn't worth it, you can buy a new iPod touch and TV cable for less.
Reactions: appledefenceforce
Comment
L

aigujin said:
Plex has been rejected two times... As of now, it is on the third round of review (source: plex forum)
Click to expand...

If it gets rejected again, we riot.
Comment
L

It's s start. App potential for this new AppleTV was its biggest appeal to me. I'm sure as time goes on awesome apps will be made for it and I'll spend more time using apps with my big TV as the display rather than my iPhone or iPad.

I think between watching TV shows on it with apps like Netflix, Hulu and HBO Now along with some games and other productivity apps, I'll be on this new AppleTV all the time.
Reactions: frnic
Comment

dysamoria said:
Stop calling it a "set top box". There aren't any television sets that you can put these things on top of.
Click to expand...

You haven't seen just what I can do with duct tape.
Reactions: rbrian, FightTheFuture, TheAppleFairy and 3 others
Comment
Z

Because it's basically a couch only iPad at this point....
Comment
L

I'd encourage everyone to take a look at Glooze - it's a beautiful puzzle game (not mine I should add) that I've been testing for someone on the dev kits - really is gorgeous.
Comment

Hmm, so if I see this right, there's no way to sync an Apple TV 4's apps with iTunes and backup apps to my Mac?

Well, that's a shame. I'm not trusting the cloud enough to get anything but very disposable apps then.
(players, Twitch and such stuff)

jdillings said:
At least Hipster Whale has an appropriate name.....take something old (Frogger) and pass it off as new and original.
Click to expand...

jdillings, nothing is ever new, everything is built on something else that went before. We all stand on the shoulders of those who went before us.
Reactions: ErikGrim
Comment

Glassed Silver said:
Hmm, so if I see this right, there's no way to sync an Apple TV 4's apps with iTunes and backup apps to my Mac?

Well, that's a shame. I'm not trusting the cloud enough to get anything but very disposable apps then.
(players, Twitch and such stuff)

Seriously after all these years with the App Store you are concerned you will loose something, or is it a case you have never purchased anything from the app store. It is always there if you need to re-download for any reason.
Reactions: ukpetey and MacAddict1978
Comment

Clarky! said:
$279 Australian for what? Until there are a million apps on this it isn't worth it, you can buy a new iPod touch and TV cable for less.
Click to expand...

I'll be happy.
Reactions: oneteam and frnic
Comment
U

frnic said:
jdillings, nothing is ever new, everything is built on something else that went before. We all stand on the shoulders of those who went before us.
Click to expand...

I don't need sling, I am boycotting Hulu for charging for premium and still showing commercials (I know they off commercial free now), but agree with the rest. I have a hard time with $29 for a single season of a TV series still, and will wait until those become more reasonable.

I recently tried CBS (or one of them which just became available on Apple TV) and could not deal with the commercials which I haven't watched in years - so it got the "don't show" treatment.

Well actually no, way before Space Invaders I was playing "space shooter" games on text monitors that displayed 24x80 screens. And there was one called "worms" that ran on our mini on a adm3 monitor before pack man, which was basically the same game without walls. It's all built on what went before.

Astroids was interesting, but was a descendant of other text based games like Pong...

WoW and ESO are descendants of a game called Colossal Cave that was a text only RPG that ran only on mini's and mainframes originally.
Last edited by a moderator: Oct 30, 2015
Reactions: rbrian, firewood and ErikGrim
Comment
S

Im actually excited for the games. I don't really game much and haven't owned a console since my family had one when I was a kid. So this will be a change and will be fun with my nieces visiting next weekend. Ultimately, there is a lot of potential here with the app store.
Comment

I would really love a good multiplayer Space exploration game with realistic flight dynamics and massive procedural generation of entire galaxies...(I do mean plural Elite Dangerous already does the milky way, I want MORE! )
Comment
You must log in or register to reply here.
Share:
Facebook Twitter Reddit Email Share Link
Register on MacRumors! This sidebar will go away, and you'll see fewer ads.
Sign Up
Top Bottom