During Apple's annual stockholders meeting in Cupertino today, Apple CEO Tim Cook revealed that Apple sold more than $1 billion worth of its Apple TV set-top box in 2013, putting sales at close to 10 million units for the year.

This is a roughly double the 5 million it sold in fiscal 2012, which was double its Apple TV sales in 2011. Cook has traditionally called the Apple TV a "hobby", but said today that "it's a little more difficult to call it a hobby these days". Horace Dediu created a chart showing the impressive growth of Apple TV sales over the past several years, making it the fastest growing device in Apple's hardware lineup. 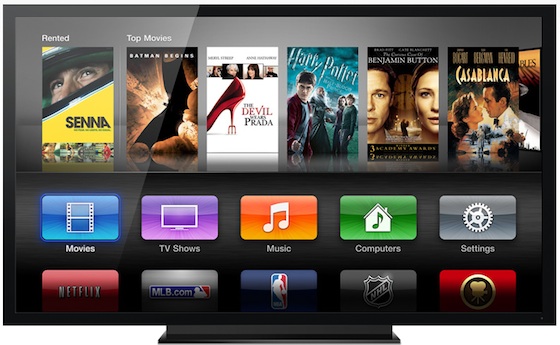 It has been repeatedly rumored that Apple is working on an improved set-top box and also a full-fledged television set. A new set-top box is expected to be introduced in the next couple of months, though it's unclear when the device itself would go on sale. A recent report said Apple would be introducing an SDK for Apple TV application development with an accompanying App Store launching to the public later in 2014.

Apple also launched a sale on the Apple TV at the company's online and retail outlets in the U.S., giving out a $25 iTunes Gift Card with purchase of the $99 device -- an unusual move for the company which only rarely offers sales on its devices.

I use my AppleTV almost as much as my iMac! Love it! Can't wait to see what is coming!

I am pretty much just dying for a real Apple TV at this point. I need somebody to slay Time Comcast.
R

The first billion is alway the hardest. So they say.
R

Half of the 10 million units sold.

I love the Apple TV. Got it for Netflix and it was kind of hanky but it's still the best way to get Apple ecosystem related things streamed over to my HDTV.

they're gearing up for something huge... it's gonna be a great year once they get the ball rolling on the first release.

It's an AppleTV newsfest day. Any update is welcome in our house.

Enough already!!! Just release it!! I'm tired of getting c*ck-teased with these headlines, only to find it being another speculation or quote from an analyst!
I know...first world problems.
A

Something is coming soon

Would the CEO talk on the Apple TV and talk it up (a $1 billion business on it own) if it wasn't leading somewhere soon?

Most of us will be disappointed in whatever Apple releases as the next version because many Macrumours fans believe it to be a magic box full of potential. However, Apples hands are tied due to content restrictions and cable companies.

I'd like to see the Apple TV have a 32GB SSD and a router combined - I'd like it to be able to run iOS games and a UI overhaul. At WWDC I'd like the company to open up the Apple TV to developers. I can't think it there would be huge amounts of apps worth downloading like on the iPhone and iPad but I do think some developers could make some extraordinary apps.

The WWE channel is very much a sign of things to come in the future.

Clearly "content is king" remains the mantra for all of broadcasting.

I'm getting close to getting one - if we had Netflix here that would probably clinch it.
S

Its a very good selling point for iOS devices. Most people I show off the Apple TV to are generally impressed by the synergy between the Apple TV and an iPad/iPhone. Existing iOS device owners would buy one, especially considering the affordable price, and Android users bemoan the fact theres nothing quite like it for their devices.

Too bad its not something easily demonstrable since it isnt a mobile device.

clcnyc said:
Enough already!!! Just release it!! I'm tired of getting c*ck-teased with these headlines, only to find it being another speculation or quote from an analyst!
I know...first world problems.
Click to expand...

What's the name of this site again?

I'm trying to figure out of I should sell my ATV v2 before this new one comes out… but if I do, I'll have to buy the current one in the meantime or try to go without for who knows how long, lol. Actual first world problems.
S

I love using my TV and I hope Apple does a lot more with it very soon.

I'd like to see it be a little more "open" before purchasing.

Tying me into iTunes for my content doesn't fly for me. I ended up going Roku, though I'm not overly impressed by it, it at least has support for standard DLNA and Plex on top of it's own channels.

But If i could have an AppleTV, I would preffer it, Especially for Airplay.

I for one, do not want to seee Apple make a TV set.
Tv's generally are not something people buy every year. An Apple TV would likely be a silly product with relatively low sales. Especially when people are paying thousands for TV's.
However, A $99 addon box to make Any TV an apple TV is great. you can upgrade it without replacing your TV.

It is time. Bring out something in the $200 price range with storage and better connection options. Release the SDK. Release the bluetooth api for controllers, and allow the Apple gaming casual revolution to blossom.

I want to play Flappy Bird on my big a$$$ projection screen!

(Side note, actually I do want to do that. Flappy Bird is actually much easier on a larger screen. I find it nearly impossible on my iPhone, doable on my iPad mini, and actually something I can play for a bit on my iPad 3. I wonder if I can airplay it to my projector?)

Wasn't it Steve who use to call Apple TV a hobby?

doh!
You know it's not a hobby, stop trying to play it down. Now hows about opening it up to developers and fixing the interface!
F

Tim is practically drooling to show everyone what they've got cooking in the labs.
R

I think Apple is trying to lock people in before Amazon comes out with their new box. Apple TV is great, stream Netfix every night.