Apple TV+ series "The Morning Show" has received a Golden Globe Award nomination for best drama series, while stars Jennifer Aniston and Reese Witherspoon are nominated for best actress in a drama series, according to Variety. 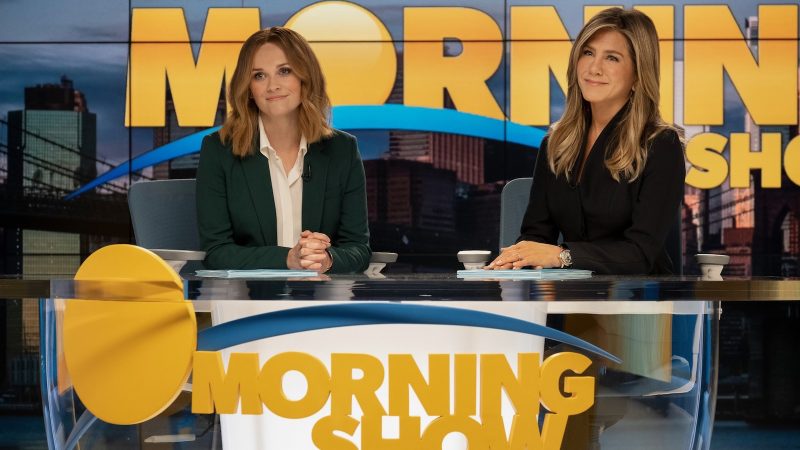 "The Morning Show" is up against HBO's "Big Little Lies" and "Succession," BBC America's "Killing Eve," and Netflix's "The Crown."

The 77th Golden Globe Awards will honor the best in film and television of 2019, as determined by the Hollywood Foreign Press Association. The ceremony will air live on NBC on January 5, 2020.

Update: Apple has highlighted its Golden Globe nominations in a press release.

"Thank you to the Hollywood Foreign Press Association for today's historic nominations," said Zack Van Amburg, Apple's head of Worldwide Video. "After the debut of Apple TV+ just last month, today's nominations are a true testament to the powerful storytelling that went into 'The Morning Show,' as well as all of our Apple Originals."

Can’t wait for Apple to start racking up more Emmys, and other awards. Heads will explode in the Apple-hate crowd ?
Last edited: Dec 9, 2019
Reactions: idrewuk, rwright, I7guy and 38 others
C

Funny how in the 2nd episode of "The Morning Show" they have an award bought by the network for one of the characters.
Reactions: rwright, Oblivious.Robot, AlexGraphicD and 17 others
K

It’s not my cup of tea, but seeing my wife and many others interested so much In it, I would say good one Apple!
Yes haters just made a big deal but ATV plus is OK. For the price.... it’s quite ok. I hope they will bring some hardcore series or films later on.
Fingers crossed, this will be a good test for them.
Reactions: matrix07, rbgaynor, Eduardo1971 and 2 others

calstanford said:
For what? Because stars are in it?
Click to expand...

Pretty much. I knew before I watched one episode it would get award nominations. Billy Crudup is probably the best cast member of the show and he didn’t get nominated.
Reactions: AlexGraphicD, DoctorTech, Ar40 and 3 others

Award winning TV show about how hard it is to be on a TV show.
Reactions: Oblivious.Robot, Alfredo_Delgado, AlexGraphicD and 3 others
S

Oh god...MacRumors commenters aren't going to like this at all.
Reactions: matrix07, jeffirl, Stars&Stripes and 21 others
K

No chance it will win
Reactions: iGeneo and Ar40

I think The Crown basically runs away with this one. Kind of surprised this even got nominated given all the bad reviews most of the industry press gave it.
Reactions: GeoStructural, Ar40, Agit21 and 1 other person
R

People misjudged this show based on the first three episodes. Glad it's getting the recognition it deserves for its fine storytelling, acting and production.
Reactions: rwright, Wokis, Alan Wynn and 11 others

Zorn said:
I think The Crown basically runs away with this one. Kind of surprised this even got nominated given all the bad reviews most of the industry press gave it.
Click to expand...

Industry press is hating on it because they feel Apple can't or shouldn't succeed in this space. If you look at user reviews like IMDB it's clear that it's a very popular a show and people are enjoying it, myself included. It's a fantastic flagship show, but I doubt it wins.
Reactions: Ed A., 15ngcs1, wigby and 16 others

Zorn said:
I think The Crown basically runs away with this one. Kind of surprised this even got nominated given all the bad reviews most of the industry press gave it.
Click to expand...

Apparently the finale is the best episode of the season and the voters were screened that episode. The show definitely got better in later episodes but I still don’t think it was that great. I don’t think Big Little Lies was that great either. It’s just the power of a big name cast.
Reactions: Regbial
M

I think it's a good show that is trying to deal with a challenging topic with some nuance. I'm not sure it'll win against the competition though. Killing Eve is another great show.
Reactions: Ar40

Mother watched it and said she didn’t find many of the actors convincing
Reactions: AlexGraphicD
I

Stanly.ok said:
Funny how in the 2nd episode of "The Morning Show" they have an award bought by the network for one of the characters.
Click to expand...

Was just gonna say that. ?
Reactions: Stanly.ok and lyngo
B

Rogifan said:
Pretty much. I knew before I watched one episode it would get award nominations. Billy Crudup is probably the best cast member of the show and he didn’t get nominated.
Click to expand...

The Globes voting board is made up of a whopping 93 members of the Hollywood Foreign Press Association. If this gets Emmy nominations, then it might mean something.
Reactions: AlexGraphicD and Ar40
K

Yeah, I think its only nominated for best actress for golden globes. no supporting actors.
Reactions: 15ngcs1

For All Mankind is freaking awesome and should get some love
Reactions: 15ngcs1, Jax44, iGeneo and 5 others
A

Khedron said:
No chance it will win
Click to expand...

I can't wait for it to win best TV show. The heads of some posters here will explode and I will be smiling for all of it.
[automerge]1575903233[/automerge]
Jennifer Aniston is a lock for best actress btw - looking at the category. She's beloved by the Foreign Press and is in her first major dramatic TV role.
Last edited: Dec 9, 2019
Reactions: 15ngcs1, jaredlipsitz, iGeneo and 1 other person
4

Mac Fly (film) said:
Mother watched it and said she didn’t find many of the actors convincing
Click to expand...

So..you’re saying your Mother prefers Jeopardy? Am I right? 😁

Anyways, acting opinions is subjective, which leads me to say I’d say Apple has pretty good idea the popularity this show has due to Cudrup and Witherspoon.
Reactions: puttputt, matrix07, 15ngcs1 and 1 other person
You must log in or register to reply here.
Share:
Facebook Twitter Reddit Email Share Link
Register on MacRumors! This sidebar will go away, and you'll see fewer ads.
Sign Up
Top Bottom