Apple today revealed "iPadOS," a new version of iOS that Apple has designed specifically for the larger screens on the iPad family. Apple said that it renamed the OS to recognize the "distinctive experience" of iPad. 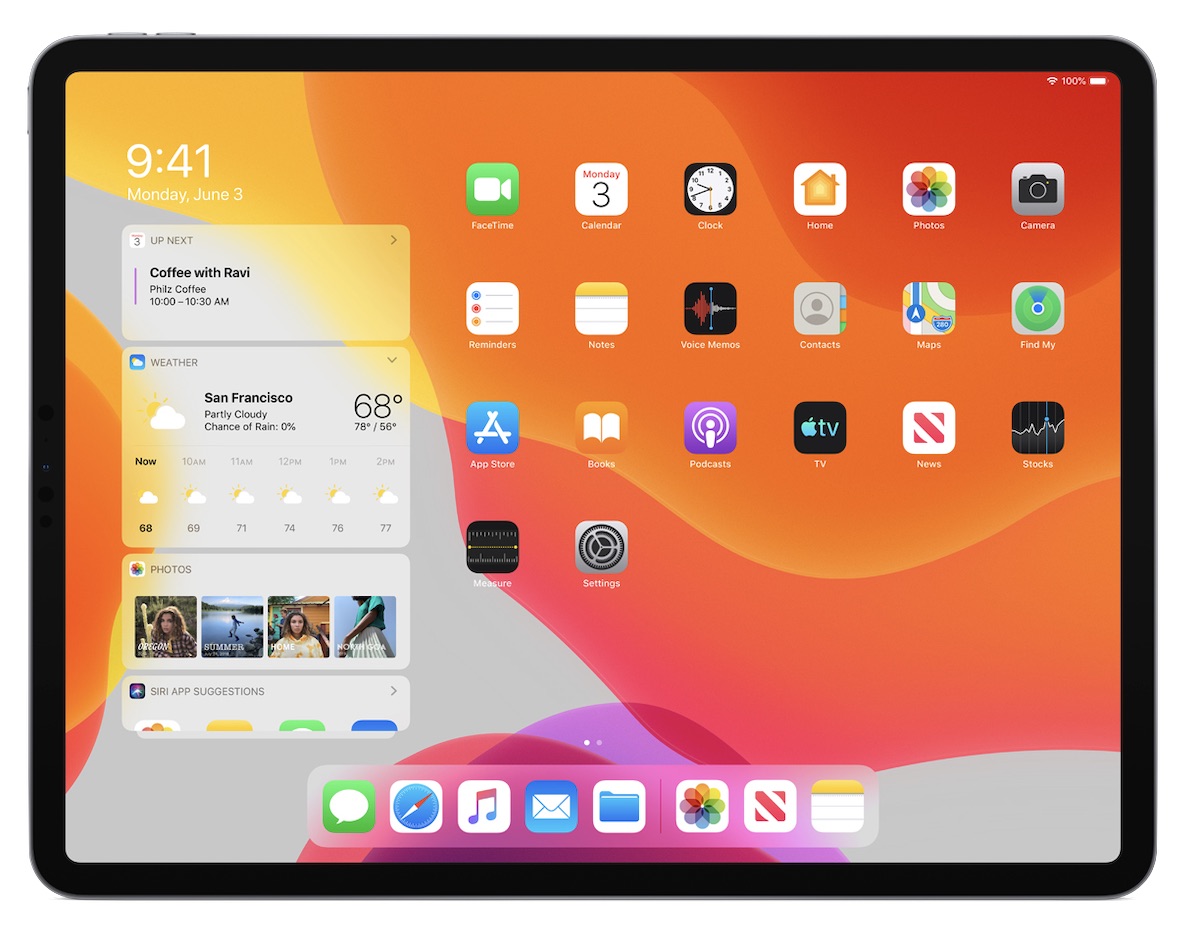 To start, the Home screen has been redesigned with a new layout that shows more apps on each page. The widget-based Today view can be added to the Home screen, providing quick access to news headlines, the weather, events, and more.

To enhance iPadOS even more, Apple updated Split View to allow users to work with multiple files and documents from the same app at the same time. For example, users can have two emails opened side by side in Mail, or two notes in Notes. Slide Over allows users to quickly view and switch between multiple apps, and App Exposé provides for a quick view of every open window.

iPadOS also overhauled Apple Pencil integration with the ability to mark up and send entire webpages, documents, or emails on iPad. Users can simply swipe the Apple Pencil from the corner of the display to enter mark up mode, quickly edit the document, and save it. Additionally, iPadOS has reduced Apple Pencil latency to as low as 9 milliseconds. 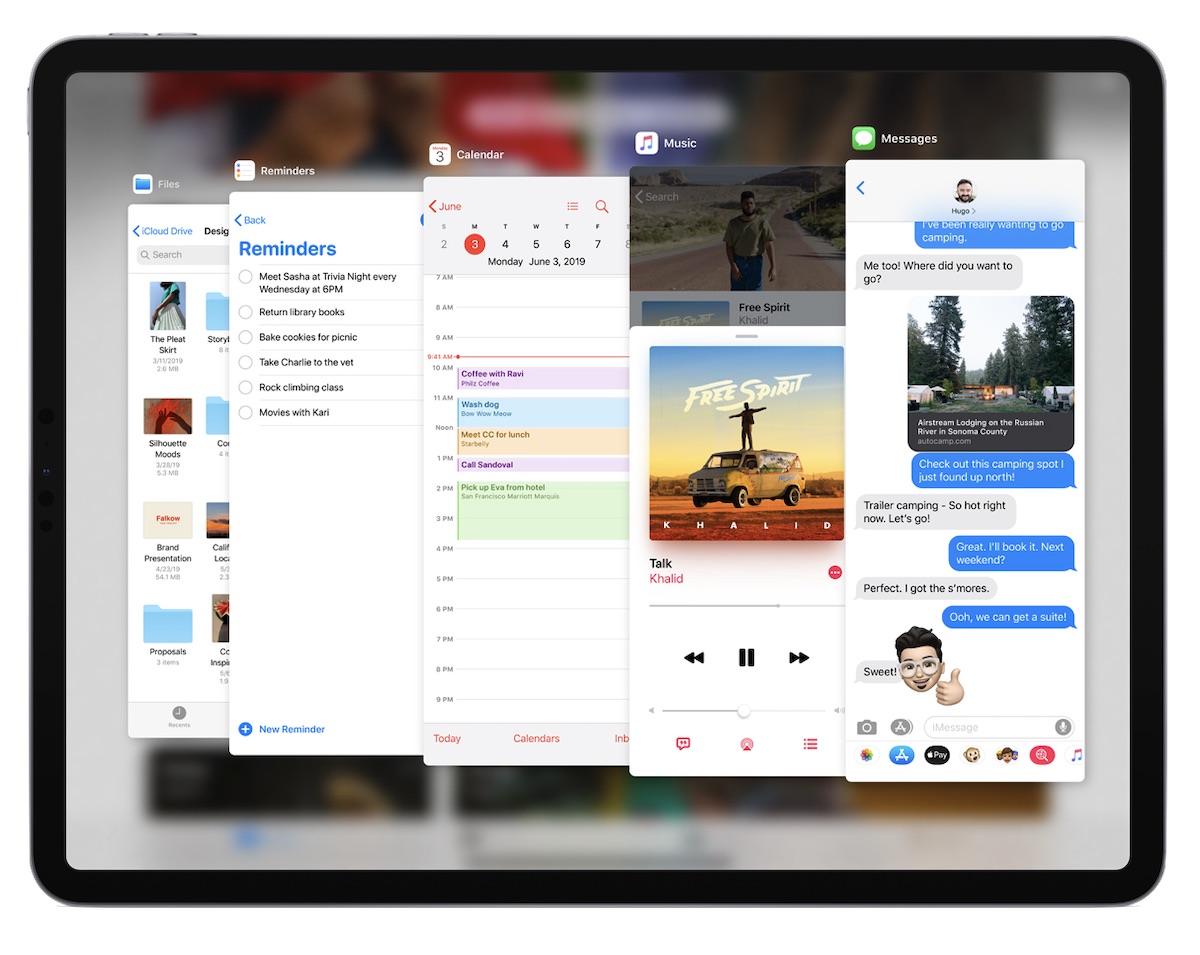 Another update centers on the Files app, which now has iCloud Drive support for folder sharing. Because iPadOS supports external drives, users can easily plug in a USB drive and transfer data all within the Files app. There's also a new Column View for easier navigation, Quick Actions for creating PDFs, and more.

To ensure all of the new parts of iPadOS could be controlled with ease, Apple is introducing new finger-based gestures for cut, copy, paste, and undo. Other updates include Dark Mode, custom fonts, a new floating keyboard, performance improvements, and updates to Maps and Photos apps.

iPadOS is available to Apple Developer Program members starting today, while the public beta will launch later this month. In the fall, iPadOS will be available as a free software update for the iPad Air 2 and later, all iPad Pro devices, the fifth-generation iPad and later, and the iPad mini 4 and later.

The iPad has always had so much potential, this kicks it up several gears!
Reactions: allonym, BWhaler, iLLUMI and 32 others
T

Why in the world would they separate the naming from regular iOS. Like iPhone hardware, so fragmented.

However they need a “Gesture” tab in Settings.app, to enable/disable, show all the gestures.
Reactions: motulist, ShaunAFC3, Shirasaki and 4 others
T

This is soooo cool!!! Finally I can use iPad as a proper companion
Reactions: motulist, ShaunAFC3, eltoslightfoot and 2 others

THANK YOU!!! About f***ing time! With these changes the iPad is one step closer to truly replace a computer.

Now hoping for mouse support and the possibility for apps to have access outside of their sandbox.
Reactions: motulist, ShaunAFC3, wbeasley and 7 others
P

Can we finally have two windows from the same program open side by side?
Reactions: ShaunAFC3, Mitochris, sfwalter and 2 others
L

This looks to be a welcome change. I look forward to seeing how well it is implemented. It is certainly looking more Mac like.


TrenttonY said:
Why in the world would they separate the naming from regular iOS. Like iPhone hardware, so fragmented.
Click to expand...

Perhaps they are prepping for a desktop OS in the line with the iPad version sitting in between the desktop and mobile presentations? Wild speculation but it is an interesting distinction.
Reactions: ShaunAFC3, ScienceIsReal, MadeTheSwitch and 2 others

pendragon1984 said:
Can we finally have two windows from the same program open side by side?
Click to expand...

TrenttonY said:
Why in the world would they separate the naming from regular iOS. Like iPhone hardware, so fragmented.

However they need a “Gesture” tab in Settings.app, to enable/disable, show all the gestures.
Click to expand...

I mean, the original iPad started with iPad OS until they merged the two OS'es together with iOS 4.
Reactions: ShaunAFC3, arefbe, ScholarsInk and 6 others
U

This is finally the OS the iPad deserved. This is the greatest WWDC in a long, long time. Apple is back baby!
Reactions: afir93, BWhaler, Cameroncafe10a and 36 others
T

Ferc Kast said:
I mean, the original iPad started with iPad OS until they merged the two OS'es together with iOS 4.
Click to expand...

Okay so I guess they now have to call iOS iPhoneOS again, like how it started.
Reactions: ShaunAFC3, Lazy and DaHarder
T

I think Apple deserves a can't innovate my ass post.

fredrik9 said:
Yes but apparently no more
Click to expand...

Considering the screen size I would say that is quite enough. You can also open a third one but it will be shown in another "desktop".

I am quite happy with all these features, I have been a strong proponent that iOS was a hindrance for iPad.
Reactions: ShaunAFC3, RevTEG, sidewinder3000 and 3 others

TrenttonY said:
Why in the world would they separate the naming from regular iOS. Like iPhone hardware, so fragmented.

However they need a “Gesture” tab in Settings.app, to enable/disable, show all the gestures.
Click to expand...

I honestly don't think many care what it's called. It's the functionality that matters. On the functionality front, they put one right over the fence in my opinion. This update goes a long way towards realizing the full potential of the iPad without worrying about the affect on the iPhone or iPod. They could literally call it pnutbutternjelly OS and I don't think most would care. It's what it can do that counts.
Reactions: afir93, motulist, ShaunAFC3 and 12 others

That sound? That is all the iPad fans yelling: "FINALLY!"
Reactions: afir93, motulist, ShaunAFC3 and 20 others

UltimaKilo said:
This is finally the OS the iPad deserved. This is the greatest WWDC in a long, long time. Apple is back baby!
Click to expand...

Curious how my 6th gen handles this! Excited

Sad no mouse support still though
Reactions: ShaunAFC3, Aston441, kazmac and 5 others

kuwxman said:
That sound? That is all the iPad fans yelling: "FINALLY!"
Click to expand...

A million voices crying out in unison!

Now this will get me to go get that Mini 5 I've been waiting to get. I don't know if my 4 will be able to handle all of this functionality. I'm some some of this won't be the best experience with the smaller screen, but still a very nice upgrade.
Reactions: ShaunAFC3, Mendota and MyopicPaideia

Innovate? These are features people have been begging for ages. Unless there was some huge technical roadblock that was preventing apple from previously adding these features, this is just apple playing catch-up.
Reactions: motulist, Digitalweddings, arefbe and 17 others

Why they didn't just kill off the iOS name and go with iPadOS and iPhone OS I don't know.
Reactions: Mr Todhunter

Did they mention anything about this?
Reactions: ShaunAFC3 and BGarza

satchmo said:
Did they mention anything about this?
Click to expand...