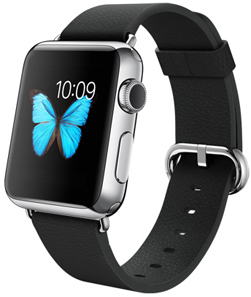 KGI Securities analyst Ming-Chi Kuo issued a note to investors today that claims Apple Watch demand may be slowing down, resulting in shipment forecasts being revised down by 20% to 30% to 5-6 million units in the third quarter.

Kuo expects total Apple Watch shipments to fall within the 15 million range for the 2015 fiscal year, lower than the consensus of 20-30 million units, but remains upbeat about the Apple Watch and long-term wearable trends.

KGI Securities conducted a survey that reveals most Apple Watch orders are scheduled to ship in June, and concludes that 2Q15 production output is likely sufficient for the orders placed so far. Kuo also notes that over 80% of orders are for larger 42mm models, implying a male-dominated customer mix based on the assumption that 42mm and 38mm watches are mainly purchased by men and women respectively.

"We have learned that 42mm Apple Watch accounts for 60-70% of production. However, the shipping times of 38mm models are generally earlier than those of 42mm. We believe this is because demand for 38mm watches is significantly below that of 42mm ones. We estimate that 42mm models account for over 80% of sales. Assuming that 42mm and 38mm watches are mainly purchased by men and women respectively, the Apple Watch has attracted mostly men."
Click to expand...

Kuo concludes that the Apple Watch, like the original iPhone, has potential albeit several areas that could be improved. In particular, he says the Apple Watch has a lack of killer apps, not a very useful Digital Crown, insufficient battery life, room for form factor improvement, sometimes sluggish processing and response times and iPhone dependance for most settings and internet access.

Could this also be due to the issues in production? I think the demand is there just not the supply.

For a second, I thought the Apple Watch was demanding some flattening!
T

I love this forum.
T

I got the 42mm Watch and it seems to be the ideal size. The 38mm is great for smaller wrists, but the display gets to be small enough where you struggle to be able to read what's on it from a reasonable distance

Considering I ordered my 42 space grey sport Watch last week, and my estimated delivery isn't until June/July, I certainly hope they're getting the supply under control. I'd love to be surprised and get the watch before July.
Last edited: May 20, 2015

Inconceivable! Shocking! Completely caught me by surprise!
Said no one.

I might buy a 38mm Stainless Steel in the least popular band and just keep it in the box, sounds like it'd be rare as rock horse sh.. in a decade.

Uhhh you realize that every Apple product improves over time ... The Apple Watch will be no different .
A

You mean after the initial launch period demand has gone down? I'm shocked says no one.
F

No surprise, there just simply isn't a market for wearables at their current price and their current bulkiness. I wore mine out to the bar the other night with some friends and they were all questioning my buy.

The only other person I've seen wearing one so far is this old hippie, quack professor I used to have. So yeah, not surprised at the sales figures.
L

The lack of availability also make people lose interest, like me. Wanted one very bad, but now I can wait and see how it goes.
I

good, let it flop. focus on making a computer that is upgradeable and stop being so hostile to enthusiasts.

The shiny new is wearing off and meh is setting in.

Meanwhile, I ordered within the first two hours of preorders and still don't have my 42mm space grey sport over one month later.

At the end of the day, Apple still sold more in 1 month by far than Google shipped in all of 2014 across all the models they have out. So still a victory

newyorksole said:
Uhhh you realize that every Apple product improves over time ... The Apple Watch will be no different .
Click to expand...

I've been generally "meh" on the Apple Watch since it was introduced. After seeing them in person, reading reviews, and hearing first-hand accounts of how people I know like it....I'm still "meh".

Seems like a nice little accessory at a $199, or $249 price point. $400 for the cheapest 42mm and ludicrous price structures for every model north of that doesn't make a ton of sense to me.

Heh, good one. I forgot about that one.
T

Brett1203 said:
At the end of the day, Apple still sold more in 1 month by far than Google shipped in all of 2014 across all the models they have out. So still a victory
Click to expand...

That IS one way of looking at it. I'm not sure that's how apple looks at it.
J

phillipduran said:
The shiny new is wearing off and meh is setting in.
Click to expand...

I'm sure there are many people out there waiting for the supply to improve so they can stroll up to the apple store and pick one up. I know I've been one of these people before.
You must log in or register to reply here.
Share:
Facebook Twitter Reddit Email Share Link
Register on MacRumors! This sidebar will go away, and you'll see fewer ads.
Sign Up
Top Bottom