Apple Stores in the United States have begun to receive shipments of the Apple Watch to fulfill in-store reservations through Personal Pickup, according to BGR. The report claims the Apple Watch will be available for in-store pickup starting today or tomorrow, but the exact product mix remains unclear at this point.

A spot check of the Apple Online Store reveals that the Personal Pickup option remains unavailable for the Apple Watch at brick-and-mortar Apple Store locations in New York and elsewhere in the United States. A dedicated Reserve and Pickup page for the Apple Watch that was live in early April also continues to redirect to the main Apple Watch product page on the company's website.

Apple Watch orders have been taken exclusively online since pre-orders began on April 10, although Apple is now catching up on the backlog of shipments and is better positioned to sell the wrist-worn device in stores soon. Apple executive Jeff Williams confirmed earlier this month that it would soon begin selling some Apple Watch models in Apple Stores, but he did not provide a specific date.

"The response to Apple Watch has surpassed our expectations in every way, and we are thrilled to bring it to more customers around the world," said Jeff Williams, Apple's senior vice president of Operations. "We're also making great progress with the backlog of Apple Watch orders, and we thank our customers for their patience. All orders placed through May, with the sole exception of Apple Watch 42 mm Space Black Stainless Steel with Space Black Link Bracelet, will ship to customers within two weeks. At that time, we'll also begin selling some models in our Apple Retail Stores."
Click to expand...

Apple Watch launches in seven additional countries on June 26: Italy, Mexico, Singapore, South Korea, Spain, Switzerland and Taiwan. The wrist-worn device will be sold through the Apple Store, Apple Online Store and select authorized resellers in the countries, including 10 Corso Como in Milan, BOONTHESHOP Cheongdam in Seoul and Malmaison by The Hour Glass in Singapore.

hope this means more bands (outside the sports) appear in store
Reactions: Jason83 and zaneliu
Comment

Apple, we can still tell how long you're taking without using your watch.
Last edited: Jun 16, 2015
Reactions: bunnicula, JackANSI and tigertazz
Comment

The 38mm is 3-7 days from order now and the 42mm is 2-3 weeks from order for all SS models but the Space Black link. I'm guessing we'll see more 38mm models in store to start. Sport models are also running 2-3 weeks on most options, but we all know Apple loves to under promise and over deliver if they can.
Comment

Nice one.
Though I'm going to have to curb the urge I have to get one even more now
Comment

If I had some spare cash I would consider picking up a stainless model in place of my space gray. Not that I'm not happy with my choice but the stainless is just a little easier to match bands and has the sapphire crystal.
Reactions: skyfreedom
Comment
T

I'm glad this finally happened.
Just as glad as I am that we can't even order the watch in Austria yet (let alone not having a single Apple store in the whole country)
Reactions: MandiMac
Comment

mattopotamus said:
hope this means more bands (outside the sports) appear in store
Click to expand...

A lot of stores already do have more bands besides the sport. You just have to ask. I was able to pick up a Blue Leather Loop in store a week and a half ago.
Reactions: Jason83
Comment
A

WeemanWise said:
A lot of stores already do have more bands besides the sport. You just have to ask. I was able to pick up a Blue Leather Loop in store a week and a half ago.
Click to expand...

I was also able to pick up a 42 mm Milanese Loop in store. Just call ahead and ask if they have them in.
Comment

roland.g said:
The 38mm is 3-7 days from order now and the 42mm is 2-3 weeks from order for all SS models but the Space Black link. I'm guessing we'll see more 38mm models in store to start. Sport models are also running 2-3 weeks on most options, but we all know Apple loves to under promise and over deliver if they can.
Click to expand...

I just ordered the 38 mm space grey sport on the 12th and it is already set to be delivered today on the 16th. That is after it estimated 2 - 2.5 weeks for delivery so they are clearly under promising and over delivering in this instance. Seems at least that model has a quick turnaround.
Comment
A

Some folks aren't so happy... 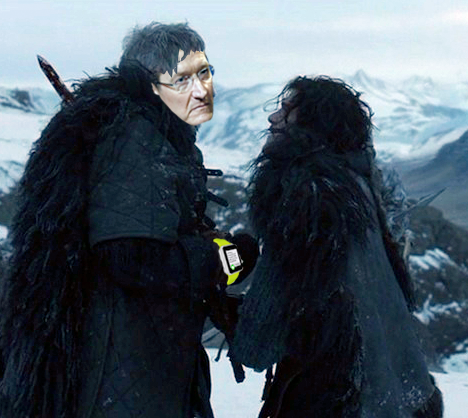 I guess some people will still wait for their Apple Watch while generation two will be announced
Reactions: Benjamin Frost
Comment

"The thrill is gone...."
Reactions: Klaatu63, ericinboston, studio¹³¹ and 7 others
Comment

I honestly highly doubt a new apple watch will come this year. Next fall 2016 at best
Reactions: Keane16, T-Will, doelcm82 and 4 others
Comment
M

I doubt that....it's more likely that the watch announcements will be in spring
Reactions: jbachandouris
Comment

I'm thinking of a 1.5 year period. So fall reveal and maybe even a relaunch date of fall as well instead of spring again. Apple originally wanted a fall release anyways
Comment

Apparently they are not available yet. Apple sales team has received no word yet on when they will be available. Once they do they will announce it on their "hotnews" page.
Reactions: ohsnaphappy
Comment
2

Two months after the "launch" and we will finally see it in stores. I am glad to see that they finally fixed the mess and hope that this is not repeated anytime soon. Let this blemish in Apple's history pass, but not be forgotten so that it will never-again be repeated.
Comment
D

zaneliu said:
I honestly highly doubt a new apple watch will come this year. Next fall 2016 at best
Click to expand...

About time they got the product in the stores. I wonder if there is enough international interest still in countries where it hasn't launched to see scalpers lining up at stores. In NYC we see a lot of tourists who buy there stuff here in the U.S. where it is cheaper and less taxed and then they take/smuggle it back to their home country, often as gifts for their families.
Comment

zaneliu said:
I honestly highly doubt a new apple watch will come this year. Next fall 2016 at best
Click to expand...

tigertazz said:
Yeah unlike the iPhone or the iPad the watch is so personal that you'd likely annoy so many people by having a yearly upgrade cycle
Click to expand...

You can only go off past history. The general rule is that Apple updates its flagship products on a yearly basis. Since the watch is new product all we're left to guess but my best guess is that they follow the same pattern with the watch.
Reactions: V.K.
Comment
You must log in or register to reply here.
Share:
Facebook Twitter Reddit Email Share Link
Register on MacRumors! This sidebar will go away, and you'll see fewer ads.
Sign Up
Top Bottom