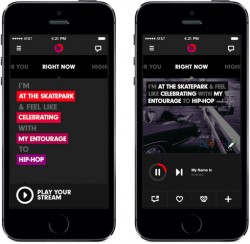 Apple is working on a new Beats-based paid music streaming service that will be deeply integrated into iTunes on Mac and the stock Music app for iPhone, iPad and iPod touch, according to 9to5Mac. The report claims that the Apple-designed streaming service will also be available for Android and through a new Apple TV app in the works.

"Based heavily upon cloud streaming, Apple's new service is centered around the user's music library. A new search feature will be able to locate any song in the iTunes/Beats catalog, and users will be able to stream music from the catalog as well as add songs to their personal libraries. Users will be able to select specific tracks to store on their iOS devices and/or computers, or keep all songs solely in the cloud. Apple will also deeply integrate Beats Music's Playlists, Activities, and Mixes features into the new service, letting users access a vast array of pre-made, human-curated playlists to fit various activities."
Click to expand...

The report adds that Beats Music users will be able to merge their existing account with an iTunes/Apple ID account for seamless transition to the new service. The app's design will shift away from the traditional red and black branding of Beats and feature a user interface that resembles the look and feel of iTunes and the stock Music app on iOS. New social features will also be included for sharing music and playlists with friends.

Apple's new subscription-based service is expected to cost $7.99 per month, cheaper than the $9.99 per month charged by Beats Music and competing services such as Spotify, Rdio and Google Play Music. While the new Beats service will inevitably have some overlap with iTunes Radio, iTunes Match and the iTunes Store, the report claims that Apple will retain all three offerings.

While Beats Music is available for Android, this new service will mark the first time that Apple develops an Android app in house. Apple CEO Tim Cook has previously expressed that he does not have an issue developing an app for Android if the circumstances make sense, but this will be the first time the company actually delivers on that idea. Unlike Beats Music, however, no Windows Phone app will be offered.

Due to some personnel changes and other difficulties in the collaboration between Apple and Beats, which the iPhone maker acquired last year for $3 billion, the timeline for this new streaming service project remains in jeopardy. The report claims that while Apple originally planned to launch the service in March, sources claim that the company is now more likely to launch the service at WWDC in June.

Replacement for iTunes Radio I hope.
Last edited by a moderator: Feb 4, 2015
C

It clearly says it isn't. Read the freakin article before trying to be the "first!" commenter.

So they can make a tool for us to merge a Beats and Apple ID but not one to merge two Apple IDs?

Otherwise excited about this. Beats just isn't doing it for me largely in part to the poor desktop version of the player. If merged into an actual application (even if it is iTunes) I'll almost certainly be switching from Spotify.

I hope they keep it on Sonos

Developing an Android app as well? Hopefully this bring us one step closer to iMessage on Android!
B

Hey Apple – take your time, and don't release this until it's truly ready. Basically, don't eff it up.

This has always been a real headscratcher, but perhaps now we can get iTunes desktop-class crossfade ability, but in our iOS music app??? Probably not important to some of you, sure. But way overdue as a feature nontheless.

Another rubbish. Alot lame stuff from apple on yosemite, but to few ****ing fixes.

How about iTunes Radio in the UK? Thatd be a cool feature!

Also, I hope this loses the beats brand in the transition
D

A better desktop client (like iTunes) would get me to switch from Spotify. I think I like the playlists better on Beats, but much of my listening is while I'm in front of the desktop Mac, so the poor quality of the desktop experience shifted me to Spotify.

alectheking said:
It clearly says it isn't. Read the freakin article before trying to be the "first!" commenter.
Click to expand...

They "hope" it's a replacement for iTunes Radio. This is just a rumor so this comment is just as likely right now as your hopes.

Oh boy this doesn't sound good. Last thing Apple needs is a bunch of engineers in their services departments leaving because Cue/Iovine decided to promote Beats employees over them.

Sources also indicate that a lack of clarity from Apple executives over the direction of the project has put the launch timeline in jeopardy. Apple had originally planned to debut the new streaming music service as early as March, but sources now say that a later launch in June at the annual Worldwide Developers Conference is a real possibility.
Click to expand...

the 9to5 mac article is really interesting, as it goes in depth about an internal struggle within Apple over the direction of iTunes/Beats. I hope that this power struggle is not affecting the finished product... though to be honest iTunes is a complete mess recently.

Also, the 9to5 mac article states that Apple is considering keeping the iTunes match and iTunes radio services, which seems like a really strange choice to me. Especially since iTunes match performs rather poorly when syncing changes in an established iTunes library (artwork, metadata, etc)
R

I just need a good Equalizer in this...

MacRumors said:
The report adds that Beats Music users will be able to merge their existing account with an iTunes/Apple ID account for seamless transition to the new service.
Click to expand...

And yet we still can't merge two Apple IDs.
W

So when I accidentally hit the play button on my Mac it will be Beats that I automatically cmd-q?
Last edited: Feb 4, 2015
H

First thing to fix: read my Genius profile (the one in iTunes, not Apple Store)
I have no idea why iTunes Radio doesn't read what I like and hate. (Unless Apple outsource the whole project, which seems happening to most of the new feature of iOS 8)

I mean, if I skip a song I bought most of the time, even the dumbest data mining would rule against playing the song.


And if they still have time left, stop streaming songs exist in my iTunes library
The bandwidth could use to download the next songs.
J

But can I still use it oversea?

Lostanddamned said:
How about iTunes Radio in the UK? Thatd be a cool feature!

Also, I hope this loses the beats brand in the transition
Click to expand...

Rumour was that iTunes Radio would come to Canada in early 2014... lol/cry/meh
E

I do not want any more bloats on iTunes nor OS X...!

"What do we need to improve iTunes?"

MGT: "Add another big bloat, er block of functionality in the form of streaming audio"

CODER: "But we already have iTunes Radio"

CODER: "What customers want that?"

MGT (to other managers after getting back to the executive mtg room): "We'll roll out a free trial and motivate the masses to upgrade iTunes and iOS player because they must for ongoing iDevice & Mac compatibility. Shortly thereafter we can spin how we have more than 100M users on our new streaming music service."

Soon after the rollout...

Apple fans in full techgasms: "best streaming service ever!", "shut up and take my money"

Others: "but Spotify", "but Pandora"

Apple fans: "Spotify/Pandora is a joke", "...an abomination", "...I never liked either of them" (so YOU shouldn't either), "hundreds of millions of iDevice and Mac users have voted that Beats is best", (a conjured statistic like) "99.9% will find Beats to be all they ever need in a streaming service"

Others: "but <either> does this better"

Apple fans: "troll", "if you like those so much, why are you here?" and again: "hundreds of millions of iDevice and Mac users have voted that Beats is best" and "99.9%..."

The only state you can surf and snow board.

In the words of Phil Schiller when IG went onto an Android device...."It jumped the shark when it went to Android"