Apple's upcoming 2017 iPhone will feature a design that's similar to the original iPhone, according to industry analysts who spoke to Korean site ETNews [Google Translate].

The site says the iPhone will use a "water drop design" that's an homage to the original iPhone, with a rear curve that is both gentler and rounder than existing metal case edges.

Apple is said to be using a three-dimensional glass material on the back of the iPhone 8 to make it more closely resemble the deeper curves on the case of the original iPhone. It would, of course, be much larger than the first iPhone, with rumors suggesting a 5.8-inch display, and it would undoubtedly be much thinner. 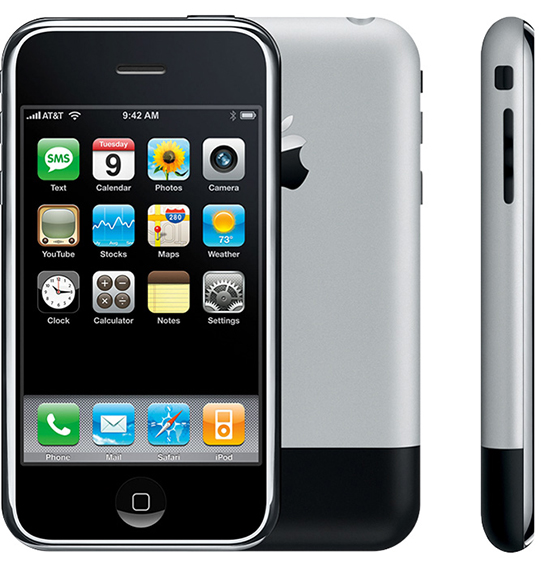 The "3D glass case" is said to "make curves" around the top, bottom, left, and right edges of the iPhone, moving away from the less curved, flat back design that was introduced with the iPhone 4 and has been used in every iPhone up to the iPhone 7.

Apple used a curved aluminum and plastic design for the original iPhone and plastic alone for the iPhone 3G. Shape wise, the iPhone 8 is said to resemble the first iPhone, but it will use all glass, similar in design to the plastic used in the second iPhone.

While an original iPhone-style curved back is rumored to be included, ETNews agrees with existing display information and suggests the OLED screen of the iPhone 8 will be "relatively flat." It will not feature a dramatically curved edge like the Samsung Galaxy line.

There have been several mixed rumors about the curve of the iPhone 8's display due to difficulty interpreting details about what constitutes a curve, but information seems to be aggregating around a 2.5D design that features a similar curve to the existing iPhone 7. We expect the display, which is said to be edge-to-edge with no side bezels, to curve just slightly downward at the edges much like the cover glass of the iPhone 7.

Little has been said about the rear design of the 2017 iPhone, so there is no information to back up the claims shared by ETNews as of yet. Rumors do, however, suggest that it will indeed use an all-glass body, with Apple planning to move away from aluminum.

There has also been speculation that the 2017 iPhone will be celebrated and introduced as a 10th anniversary device, and in that light, an homage to the original iPhone makes some sense, but these design rumors should be viewed with some skepticism until confirmed by additional sources.

Yet another random guess.
Reactions: 6foot5foot, dsh3, Col4bin and 31 others
A

I wonder how much they're going to reference the original iPhone in the Edition given that they don't like looking back.... although I suppose the whole idea of a 10th anniversary iPhone model kind of contradicts that.
Reactions: NamE_O, hlfway2anywhere, Internet Enzyme and 1 other person

Ah, the water drop design rumours again. That takes me back.

Anybody remember those same rumours for the iPhone 4S?
Reactions: Smartass, T-Will, DCINKC and 14 others

In other news... let's throw everything at the wall and see what sticks!

Gotta love rumors. Doesn't matter what you say, something will be true!
Reactions: Col4bin, tyasjs, DCINKC and 9 others

MacRumors said:
Apple is said to be using a three-dimensional glass material
Click to expand...

Is there some two-dimensional glass out there? four-dimensional? Pet peeve: marketing speak shouldn't be used to technically describe a product.

A shape that hearkens back to the OG iPhone... I can dig it.
Reactions: Jstuts5797, lavem, AdiQue and 27 others

The retro look? I do not think so. Just looks like they are guessing everything.... still. I don't think many people know yet what is in store for this iPhone 8 (Or whatever it's gonna be called, see, we hardly even know that haha). Waiting for the leaked parts to start come out. In the mean time I am taking any rumor with a pinch of salt. Interesting reading though!
S

I fail to see how that design is at all reminiscent of a water drop.
Reactions: tyasjs, beergotmeripped, jyen and 55 others

Gotta say, that old phone is quite beautiful looking. An homage would be very appropriate, not to mention it would be interesting to see how they might mix the original with their current design trend. Hopefully would produce a artful hybrid and not an abomination.
Reactions: Prime Mover, DCINKC, Lazy and 3 others

AbSoluTc said:
In other news... let's throw everything at the wall and see what sticks!

Gotta love rumors. Doesn't matter what you say, something will be true!
Click to expand...

I predict that it will resemble an iPhone and run iOS 10.3 or later.
Reactions: Demo Kit, Glassed Silver, MTBCAM88 and 4 others

A physical product with three dimensions. Who would have thunk it!?
Reactions: AdiQue, Smartass, JohnArtist and 11 others

Does this mean they are going to make the next Mac Pros resemble the 5,1?
Reactions: MartiNZ, dlucks, pat500000 and 3 others

Umm, it sounds like they're describing the 6/6s/7.
Reactions: LiveM, myrtlebee, 0lf and 1 other person

keysofanxiety said:
Ah, the water drop design rumours again. That takes me back.

Anybody remember those same rumours for the iPhone 4S?
Click to expand...

keysofanxiety said:
Ah, the water drop design rumours again. That takes me back.

Anybody remember those same rumours for the iPhone 4S?
Click to expand...

We want a brand new design not a rehashed earlier design.
Reactions: AppleScruff1, Col4bin and LiveM

Make it the exact same size and weight as the original one but with top of the range specs and I'll buy it. Hate all phones above 4".
Reactions: Prime Mover, SeattleMoose, Datalinks and 1 other person
D

My favorite iPhone to hold in my hands was the 3GS. It just fit! Hated giving that phone up.
Reactions: Prime Mover, truethug, ILikeAllOS and 10 others

You have to love this time of year. Rumor after rumor afte me rumor. Hell this phone isn't coming out for at least another 6 months. Lol
Reactions: tyasjs, Demo Kit and H3LL5P4WN

myrtlebee said:
I fail to see how that design is at all reminiscent of a water drop.
Click to expand...

Picture a water drop, not in air, but flat on a hard surface. Water bead might be a better way to describe it.
Reactions: lordofthereef, tobefirst ⚽️, QuarterSwede and 4 others

Hopefully they don't fragment the iPhone further with "S" updated models and the "iPhone 8" on top of that.

"it would undoubtedly be much thinner".