Apple's new "Designed by Apple in California" photo book, chronicling 20 years of Apple design with 450 photos of its products and the processes used to make them, is now available for purchase on Apple's website in a smaller 10.2×12.8 inches size for $199 and a larger 13×16.3 inches size for $299. 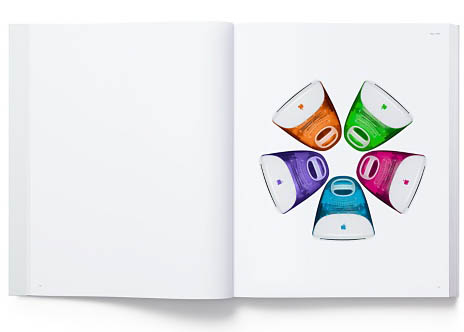 The 300-page hardback book, reflecting the time period between the original iMac and Apple Pencil, is estimated to ship in 1 business day in the United States. It is also available in the United Kingdom for £169/£249, with estimated delivery by Friday, and in Australia, France, Germany, Hong Kong, Japan, South Korea, and Taiwan.


The book is dedicated in the memory of late Apple co-founder Steve Jobs. The photos were taken by photographer Andrew Zuckerman.

A visual history spanning iMac to Apple Pencil, complete with descriptions of innovative materials and techniques, it captures every detail with honesty and intention. Printed on specially milled German paper with gilded matte silver edges, using eight color separations and low-ghost inks, this hardcover volume took more than eight years to create and has been crafted with as much care and attention as the products featured within. It is both a testament and a tribute to the meticulous design, engineering, and manufacturing methods that are singularly Apple.
Click to expand...

The book is also now available at select Apple retail stores, such as Apple Regent Street in London, Apple Opera in Paris, and Apple Ginza in Tokyo. In the U.S., this includes various locations in New York City, Los Angeles, Chicago, Miami, Dallas, San Francisco, and Palo Alto, and at Apple's campus store at its Cupertino headquarters.

Article Link: Apple's Photo Book of Apple Products Now Available for Up to $300

** Secretly wants to buy. Awaits reaction from other readers**
Reactions: Speedy Dingo, wlossw, bunnicula and 5 others
A

Apple has officially lost its ****
Reactions: JuBe, Desertwinds, Luap and 16 others

I was thinking of getting this, but I didn't realize it was going to be so expensive.

I usually do not buy books like this so many that price is normal, but I was thinking it would have been less than $50.
Reactions: Ulisescm and umee1989

The book is too fat. I'll wait for next year's thinner version.
Reactions: Internet Enzyme, fat jez, JuBe and 27 others
K

This is a specialty item for collectors. Feel totally free to skip it if it ruffles your feathers.
Reactions: Ant2369, orbital~debris and jonnyb098

Maybe at this price, their plan is to pad their "other" category in the revenue chart. Then, say the increase is due to the AW sales.
Reactions: Internet Enzyme, ThaRuler, navaira and 2 others

** Secretly wants to buy. Awaits reaction from other readers**
Click to expand...

It's not unusual. Some art books in limited editions and big formats often go for similar prices or much higher.
Reactions: orbital~debris, zzLZHzz and bunnicula
X

Looks like an interesting book, but a little steep for a coffee table.
Reactions: EedyBeedyBeeps and bernuli
N

They will for sure be sealed at the Apple Store. You aren't going to be flipping through anything.
Reactions: ejpeg, CB1234, ricci and 3 others
M

I already own a book. I might consider this when my current book wears out.
Reactions: Breaking Good, BlindDoggie, venomgt95 and 9 others

Next year, Apple will be releasing a book of photos of Apple customers purchasing the first Apple Books.

Reminds me of a skit on SNL:

"Wonderful new item has just been made available to the convention…
It’s a program from the 1975 convention…
Yeah, it’s a very special item. I’m sure you’ll enjoy it.
It’s only $30…"
Click to expand...

I wonder if there's a page about the fake speaker grills.
Reactions: Breaking Good, 555gallardo, davester and 1 other person
S

Isn't this contradictory to Apple's green initiative?
Reactions: Breaking Good and Aldaris
B

I'm glad this news release came out since we need another 200-300 posts similar to yesterday's news about the book.
Reactions: orbital~debris and Aldaris

I wonder if there will be an iBooks version.
Reactions: JuBe, AZ63, EedyBeedyBeeps and 6 others

If you've been around at all, you've already seen the pictures. In ads. You're not going to see a photo of an iPod that was "too good" for a full page ad in People magazine.
Reactions: Aldaris and Someyoungguy

They'll use some of the revenue from each sale to plant a small rain forest.
Reactions: sransari

doelcm82 said:
If you've been around at all, you've already seen the pictures. In ads. You're not going to see a photo of an iPod that was "too good" for a full page ad in People magazine.
Click to expand...

To be fair, there are a lot of component photos in there that, at I least I have never seen before. Those were pretty cool to see.
Reactions: orbital~debris

Hahaha how great is the different size with $100 premium. This is so priceless I had to double check it wasn't April 1st.
Reactions: toph2toast, Pbrutto, ender21 and 1 other person

Book is $299. Silicone slipcover is availalbe for $79. Premium leather for $149. Also availalbe USB* page warmer for $199 (*requires extra cost USB-C dongle for use with 2016 MacBook Pro).
Reactions: JuBe, Speedy Dingo, sundragon and 9 others