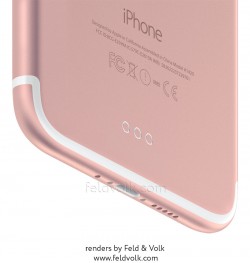 Apple recently reported its first year-over-year decline in iPhone sales, with CEO Tim Cook claiming one of the reasons is that the upgrade cycle for the larger iPhone 6 and iPhone 6s series has stretched out longer than it anticipated.

Despite the launch of the lower-priced iPhone SE, that decline is expected to continue into the second half of this year. In reporting its first negative-growth quarter since 2003, Apple forecasted another revenue drop next quarter.

The sales decline is placing downward pressure on Apple's overseas suppliers, who have ridden the iPhone's coattails to success over the past half-dozen years. Not only does LCD supplier Japan Display reportedly expect to post a nearly $300 million loss for the fiscal year ended March, but Nikkei reports that Apple's slowdown is also sending Taiwanese suppliers into a downward spiral.

"Suppliers are saying that they are getting fewer orders for the second half of this year compared with the year-ago period," a source said. "The traditional peak season this year will not be able to compare to the past few years."
Click to expand...

The report claims Taiwanese Semiconductor Manufacturing Company (TSMC), one of Apple's primary chip suppliers, may ship up to 30% fewer chips in the second half of 2016 compared to the year-ago period. The decline is attributed to the iPhone 7's expected lack of innovative features, saturation of the smartphone market, increased competition, and a global economic slowdown.

Another source said that for Taiwan Semiconductor Manufacturing Company, the sole supplier for the latest A10 chips used in iPhone 7, its iPhone 6s and iPhone 7 chip shipments for the June to December period will likely shrink to 70%--80% of the level reached in the second half of 2015.
Click to expand...

Apple suppliers Largan Precision, LG Display, Catcher Technology, Foxconn, and Pegatron have and will likely continue to face similar declines in the near term.

Largan Precision, a key high-end camera module supplier for Apple's iPhone, reported its first year-on-year decline in revenue in three years in the last quarter of 2015. The company has suffered a revenue fall for five months in a row since last December.

Adam Lin, chief executive of Largan, attributed the dip to a "significant scale-back of orders from a major customer."
Click to expand...

Apple is expected to announce the iPhone 7 and iPhone 7 Plus, the latter of which may be branded with a "Pro" name instead, in September. Newly leaked drawings suggest both smartphones may have no 3.5mm headphone jack and a single speaker, while a dual-lens camera system and Smart Connector will seemingly be exclusive to the larger 5.5-inch model with 3GB of RAM.

this is pathetic
Reactions: xtshabi, ruimpinho, Glassed Silver and 15 others

Finally someone acknowledges the lack of innovation! Hopefully Apple gets a wake up call.
Reactions: LadyX, mechatak, Eduardo Forneck and 32 others

It's far more about marketing than innovation at this point.
Reactions: ruimpinho, Ulenspiegel, Glassed Silver and 18 others

I am no analyst, but this is not a difficult prediction
Reactions: michelepri, duncansby, recoil80 and 4 others

They'll be scrambling to keep up. Maybe people are buying every other one now. I know I am.
Reactions: michelepri, CharlieJaggers, t76turbo and 1 other person

Way too early to call with any certainty IMO.
Reactions: xtshabi, Xtremjeepn, uid15 and 3 others

Bought every single iPhone up to the 6. Now I am 'droid.
Reactions: michelepri, mechatak, bliss1111 and 12 others

well, I guess I am keeping my 5S for another year. No worries, still working like a charm but Apple is sleeping on the wheel. I think they are focusing on too many things at the same time. Prioritize Mac, iOS devices and services. Car and Watch not so much....
Reactions: Simche, braintumor, Demo Kit and 7 others

Its probably untrue and they are saying this to generate hype, and to create the illusion of scarcity.
It probably will be a great phone, dual camera, maybe 4k recording, possibly 4k screen, pretty amazing stuff. Like I said, this is probably an artificial marketing ploy

You'd think they would, you know, DO something about the lack of innovation. Hell, I don't even need innovation, just give me change.
Reactions: michelepri, Simche, AleXXXa and 2 others

This reminds me of the speculation on who will be leading the polls going into the 2016 general election. Way to early to tell accurately as much can change between now and when we elect a new president, and more importantly I get a new iPhone! /s

Not exactly a surprise. Hope it's wrong, however ...
Reactions: Sandstorm

I imagine a story with a title like this on MR should see a gathering of positive comments below it. Keep in mind we haven't seen iPhone 7 yet.
Reactions: Howyalikdemapls

You'd think they would, you know, DO something about the lack of innovation. Hell, I don't even need innovation, just give me change.
Click to expand...

Give me a good working device with a basically bug-free OS. Not asking for too much here...
Reactions: Xtremjeepn, AleXXXa, JungleNYC and 3 others

I bought a SE with the latest guts and no protruding camera and the battery lasts forever at about half the price of the last full sized phone. I'm perfectly content for a few years.
Reactions: mpavilion, Gudi, Ballis and 1 other person

Just make sure there is enough to meet the demand.
Every year the iPhones go on backorder within minutes when pre-orders open, and I suspect it will be the same for the iPhone7/7Plus
Reactions: bilibug and GrumpyMom

Is the iPhone 7 out already? I must have missed it.

Obviously we know everything about the iP7 and have reached an accurate conclusion that it lacks innovation.

Good thing no one has jumped to conclusions.
Reactions: ericwn, Xtremjeepn, MacNut and 12 others

While I agree with the sentiment here (still doubting I'll even upgrade my iPhone 5s to a 7 based on what we know) it's also fun and instructive to just cast your eyes down to the bottom of the page, and see the "Similar Threads" box, and the dates on those threads.
Reactions: Xtremjeepn and matt3526

I'm predicting the same thing. Just scrap it and wait to release something worthwhile.

Apple should just discount the 6 series, add the new chip and add more storage to spark sales and wait for whenever their re-do is ready to ship.
Reactions: Coli22 and mkeeley
B

Barry Bishop said:
Its probably untrue and they are saying this to generate hype, and to create the illusion of scarcity.
It probably will be a great phone, dual camera, maybe 4k recording, possibly 4k screen, pretty amazing stuff. Like I said, this is probably an artificial marketing ploy
Click to expand...

It will definitely have 4K recording.

A customer purchases iPhone 7 "hey guys I just picked up the iPhone 7. Wait a minute... That serial number looks very familiar......hey.....this was my old iPhone 6 Plus serial number!!"
Reactions: Coli22 and mkeeley
You must log in or register to reply here.
Share:
Facebook Twitter Reddit Email Share Link
Register on MacRumors! This sidebar will go away, and you'll see fewer ads.
Sign Up
Top Bottom