Apple's new Apple SIM card in the iPad Air 2 and the Retina iPad mini 3 is designed to be universal, usable across a variety of wireless carriers in the US and UK, including AT&T, Sprint, T-Mobile, and UK's EE.

According to user reports in the MacRumors forums and on Twitter, however, AT&T is not supporting this interchangeability and is locking the SIM included with cellular models of the iPad Air 2 and Retina iPad mini 3 after it is used with an AT&T plan. 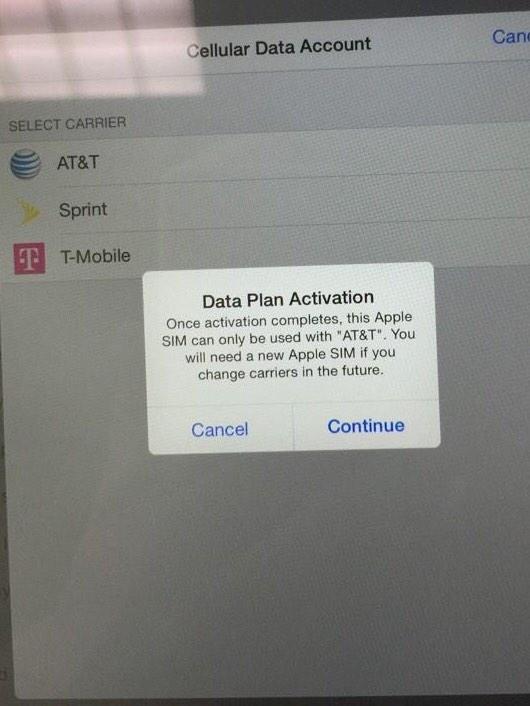 Image via John Legere​
A newly posted Apple support document details what happens to the SIM when it is activated on US carriers.

Using Apple SIM, you can choose from different cellular carriers and their various programs. The data plans vary by carrier. For instance, in the United States, you can choose a domestic plan from either Sprint or T-Mobile and also pick an alternate plan from the other carrier as needed. When you choose AT&T on iPad Air 2 and iPad mini 3, AT&T dedicates Apple SIM to their network only.
Click to expand...

According to the Apple support document, when an Apple SIM becomes locked to a specific network like AT&T, purchasing a new Apple SIM from an Apple Retail store will allow an iPad to be usable with other carrier programs.

Apple introduced its universal SIM alongside the iPad Air 2 and Retina iPad mini 3 on October 16. It is the first SIM provided by Apple that is designed to work across multiple carriers.

Update 12:10 PM PT: An AT&T spokesperson confirmed to Re/code that AT&T customers who use the Apple SIM with AT&T will need a different SIM card to switch carriers.

"With us you can change carriers with this iPad any time you want," he said. "It is an unlocked device. ... All [you] have to do is switch out the SIM in the device so it works on another carrier."
Click to expand...

AT&T did not explain why it opted to lock the SIM card to its network, however, with the spokesperson saying "it's just simply the way we've chosen to do it."

Oh for the love of god.
B

O-k, Sprint and T-Mobile it is.

The big two must think they're invincible.

You have to be kidding me, AT&T... When will carriers stop doing stupid things like this?
B

Such an AT&T move.
J

Oh, okay, just hit cancel then. Is my response.
0

And that is exactly what I expected to happen. Too bad Verizon opted out of this. I would easily go back & forth between them & TMO depending on travel needs.

If one does go with TMO for US use, would one be able to buy data when traveling overseas with a local carrier w/o having to swap SIM cards? This would be an exceptional feature.

John Legere to the rescue.
T

AT&T should be sliced up into smaller companies again
B

Wasn't there a ruling recently that they can no longer do this?
K

I understand why AT&T felt it needed to do this, but long term, I think this is bad Business.

I switched from AT&T to Verizon, realized it was like voting for a President, whomever wins, we lose.

I then switched from Verizon to T-Mobile, have NOT regretted one bit. I save money and the coverage suffices for me and my needs, which is LTE where I live and travel. Win win for me.

I love the "image by John Legere" tag.

This is why we can't have nice things!
0

BrianMojo said:
Wasn't there a ruling recently that they can no longer do this?
Click to expand...

Well, the device isn't "locked" just the SIM. It says you can still put another SIM in there to use on other carriers.

Defeats the purpose of the Apple SIM, AT&T.

Patriot24 said:
John Legere to the rescue.
Click to expand...

Wouldn't this be in violation of some policy Apple would have put in place before they released these types of SIM's?
S

Cant wait to hit cancel, unfortunately mine is still "preparing to ship"

Wow, AT&T is getting worse and worse each day.

so how much is a new Apple SIM going to cost?

Cuban Missles said:
I understand why AT&T felt it needed to do this, but long term, I think this is bad Business.
Click to expand...

Well, I don't see a good reason. The only thing it does is create inconvenience for the customer. It does not keep the customer from switching carriers by obtaining another SIM.

I was actually planning to use AT&T on my Air 2, but now I will never use AT&T since I don't want to lock my Apple SIM. T-Mobile right now has a 5GB 150-Day pass for $10 as a limited time offer ...
You must log in or register to reply here.
Share:
Facebook Twitter Reddit Email Link
Top Bottom