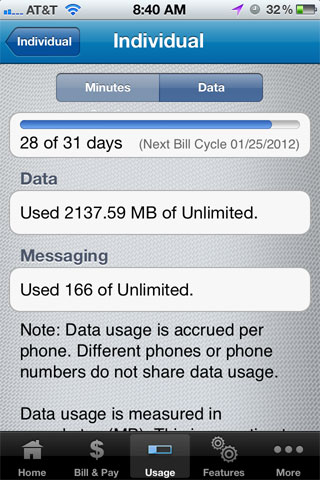 In October, AT&T announced that they would start throttling data usage amongst mobile Unlimited Data Plan users. While AT&T no longer offers an Unlimited Data plan to new customers, many of the original iPhone purchasers are still grandfathered into that plan. Those iPhone users have been able to retain these Unlimited plans, even though AT&T has since moved to a tiered data plan structure.

When AT&T announced their plan to start throttling users, the company said that they would only be throttling the top 5% of users. Early reports of affected users had pointed to 10GB-12GB per month users as the initially affected.

It seems that ceiling has decreased significantly over the past few months, at least for some regions. John Cozen reports that he received his top 5% data usage warning after reaching only 2.1GB of data for January.

I received a message during my last billing cycle, warning I was in the top 5% of my region and would experience reduced data speeds next time I reach that level of data use. I immediately checked my data usage on the AT&T iOS app.

2.1 GB. Less than I expected considering AT&T offers a 3GB plan for $30 a month. The same amount I've paid for the unlimited data plan since signing up with them many years ago. AT&T no longer offers an unlimited data plan, anyone still on it has been grandfathered in.
Click to expand...

Cozen contacted AT&T to make sure it wasn't a mistake, and after several back and forth exchanges, it seems clear that it wasn't a mistake. The AT&T representatives seemed to confirm that 2.1GB did fall in the 5% range and the only option to avoid throttling was to move to a tiered plan.

Cozen was understandably upset since AT&T even offers an unthrottled 3GB plan for the same price he is paying at $30 month.

AT&T's top 5% measurement seems to be region-specific, as some users are continuing to see higher than 2GB usage without throttling.

So because one person gets throttled after 2gb you assume they do it to everyone after 2? That doesn't make sense. I, and many others that I know use way over 7gb a month and we've never been throttled.
P

I got the same message right at 2gb. Ticks me off, really. 2gb doesn’t sound too unlimited.

Are you suggesting that if 2GB is amongst the top 5% of users, that 7GB is not?

edit: below, it seems it might be a regional scale to measure the 5%.

Same here? I haven't been below 3 in months, 3.1 in Jan, and as high as 8 in November and and no notification other then one to stop tethering, which I did when I upgraded to 5.0.

There has to be more in common with those being throttled. Are they JB? Using 3G unrestrictor or MyWi? Running older versions of iOS? Are they in certain geographical areas?
C

My buddy stated getting throttled while only using 3 gigs a month on "unlimited". He was told by AT&T he was in the top 5 percent for "his area". We live in the SF Bay area so 3 gigs doesn't sound like very much.
O

I do have to call BS on the 2GB throttle point when the 3GB plan costs the same amount of money as what he paid for his "Unlimited".

I got a notificiation just after passing the 2GB mark this past billing cycle as well. About a week and a half ago.

oh I do hit the nail on the head on this one. I so called it 2 weeks ago in another thread. lawsuit please someone

arn said:
Are you suggesting that if 2GB is amongst the top 5% of users, that 7GB is not?

I think what he said was clear.

Many people, myself included use more than 2GB per month. May be in the top 5% by their standards, but have not been throttled.
C

arn said:
Are you suggesting that if 2GB is amongst the top 5% of users, that 7GB is not?

There was something mentioned like "region" in the mail from AT&T. So maybe while in one region 2GB could be top 5% in other 7GB might be not. That said it would make the conceptbehind very "strange" and uncontrollable for user. Looks like AT&T want to get rid of the unlimited plans.

Update: never mind; I was too slow punching my text;

My buddy stated getting throttled while only using 3 gigs a month on "unlimited". He was told by AT&T he was in the top 5 percent for "his area". We live in the SF Bay area so 3 gigs doesn't sound like very much.
Click to expand...

Interesting. Maybe it is based on location. People should post their location, data usage, and if they've been throttled...

This is totally out of character for AT&T! normally they don't seem like the type to slowly nickel and dime you until you're broke.

Yep, sure seems as though AT&T is wanting to turn *Unlimited* into a maximum potential 39.5 GB / month.

You gotta remember, they are trying to incentivize people to change over to one of their Tiered data plans, as it enables them to charge overages, something that they are currently unable to do for subscribers on their unlimited data plans.

They don't outline what level of service that they must provide in conjunction with your Unlimited service, and realistically that is the problem. They are exploiting a loop hole in their own contract.

Are you suggesting that if 2GB is amongst the top 5% of users, that 7GB is not?

edit: below, it seems it might be a regional scale to measure the 5%.

yes I would. also AT&T said back when they dropped unlimited data plans that 98% of all users use less than 2 gb per month that would by their own words pot 2 gb per month users in the top 5%. Does anyone realize that their throttling plan is faulty and over time that top 5% is going to be a smaller and smaller number mark my words in the next 3 months that will change the limit or people will start being throttled under 1GB. that's a great unlimited plan it's workin like they want people are dumping the unlimited data. if there is a law suit those who drop the plan because of this should be allowed back on it. also here's another prediction once a criticle number of people drop the unlimited data they will stop in hopes of avoiding a class action or something like that. I so love it when I'm right. and wtf AT&T I'm still keeping this plan to the bitter end. come one Apple Wireless where are u.

regional or not it's a faulty method for throttling.
T

Someone on the board once mentioned that the 'top 5%' is a dangerous concept, cause as people are being scared off and use less and less data + majority of users now on tiered plans (some of which limited to only 200 MB), the 'top 5%' quickly drops, and it did.

I use a bit over 3 GB of data on my SPRINT phone, no throttling, and I love it! Not the fastest, but consistently good and the phone works, and I am not getting robbed.
D

Might I sugget the article title be amended to mention that this is for mobile users and not general ATT internet subscribers.
I

I knew I was getting throttled at 2GB when I was on vacation this past New Years and received a text from AT&T that I was about to get throttled. My only reliable internet service was 3G as I was on vacation. Seriously, throttling at 2GB is nowhere near realistic as it can have negative real world consequences. I would hate to imagine where I needed the 3G service while I was on vacation and away from any WiFi and was in the middle of the throttling. What happens if the information I need to download over 3G becomes a matter of life and death?

Throttling at 2GB is not unlimited 3G data, the plan I have been paying for since owning my original iPhone. In fact, it is still called "unlimited data" on my bill! 2GB is not realistic for unlimited and calling anything over 2GB the top 5% is equally unrealistic. Before the throttling, I along with many unlimited 3G users, would easily be able to consume 7GB per month. I think that anything over 7GB would have been a lot more realistic than this pathetic 2GB.

It's time for us customers to stand up to AT&T. I can't wait until my contract with them is finished. I'll buy my next iPhone on another carrier. Hell, I'll even buy it unlocked if I have to.
A

I got the warning at 2.1 Gig too (Richland, WA -- Eastern Washington state region) & MANY (10+) people in another thread posted on here reported that 2Gig seemed to be a magic limit for them...
You must log in or register to reply here.
Share:
Facebook Twitter Reddit Email Share Link
Register on MacRumors! This sidebar will go away, and you'll see fewer ads.
Sign Up
Top Bottom