Banned App Store Developer Had Been Trying to Auction Off Business

Yesterday we reported on a MobileCrunch story> about developer Khalid Shaikh, whose developer status was terminated by Apple over third-party intellectual property complaints, resulting in the removal of all of his apps from the App Store. Shaikh had several hundred apps under his name in the App Store, many of which seemed to simply pulled data on a specific subject from the web without providing any other original or unique content. Additional information has come to light about Shaikh showing that he has been attempting to sell Perfect Acumen, the business entity responsible for the development of his apps, for some time now.

On Flippa.com, his auction is titled "1400 iPhone Applications for Sale" with the most recent listing date as July 2. Although all of the apps he previously had in the App Store were listed under his name alone, the details within this auction reveal that the apps were the products of Perfect Acumen. The auction is still active and shows no offers pending or accepted. 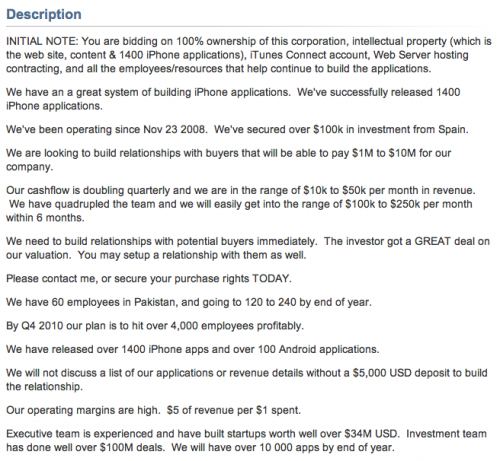 ​
Previous auction listingsshow an interesting trail of information for the business, with the first auction in January indicating that the business had 5 employees and earned $1800 per month in revenue, all the way to the current listing that states the business has 60 employees with revenue between $10,000 and $50,000 per month. Shaikh also reveals in this listing that headcount is expected to increase to "120 to 240" by the end of this year and that they plan to have over 10,000 apps within this same time frame. 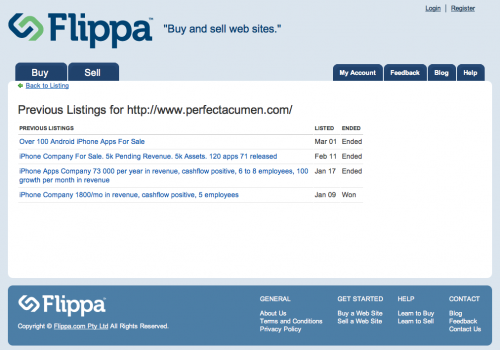 ​
According to Perfect Acumen's website, the company is a "website design/development, graphics and internet marketing company" so iPhone app development is apparently only one aspect of its operations. The current auction consists of "100% ownership" of the company, including its website, content, 1400 iPhone apps, and 100 Android applications. No mention whatsoever is made of Apple's decision to terminate its relationship with Khalid Shaikh and withdraw all of his apps from the App Store.

Do they take PayPal. I cannot imagine Apple somehow approving it again.

Because investing in a defunct company is always a good idea.

No, they only accept itunes payment
D

BTW, anybody that is considering purchasing this business should contact me about some beautiful land in central Florida and I have a great bridge in NYC for sale

BTW, anybody that is considering purchasing this business should contact me about some beautiful land in central Florida and I have a great bridge in NYC for sale
Click to expand...

DrJason said:
BTW, anybody that is considering purchasing this business should contact me about some beautiful land in central Florida and I have a great bridge in NYC for sale
Click to expand...

Why are you selling? Do you have pics?
R

That description is far too amateurish to be written by a company that supposedly has experienced executives. Do they really think they are going to attact a bid with that posting?

I would hope that he diversified some of that suspect income.....

It's not THAT bad people... this is a guy who has built a software development network for mobile platforms that he is selling. That network represents more than just iPhone and does have value... the PROBLEM is there is no discussion of any pending legal actions against the company, any smart buyer would pursue that in their due diligence, but this is a far cry from buying a bridge in Brooklyn.
K

loving how they get $5 of revenue for every $1 spent great (supposedly) margins (nothing to do with them) sounds like the american dream, or possibly a little money laundering

Hey, I know how to make money fast: I'll buy his business and then immediately turn around and sell it for twice as much!

10,000 apps by the end of the year? So they will basically be the developers behind 1/6th of all apps in the App store? GOOD developers spend a year making one or two quality apps.

Umm, I think it's a little too late buddy now that everyone knows Apple will not be accepting any more apps from your business and has pulled all your current apps.
M

I hope he receives nothing.

And he'll try to blame Apple for costing him between 1 & 10 million dollars.

jb510 said:
It's not THAT bad people... this is a guy who has built a software development network for mobile platforms that he is selling. That network represents more than just iPhone and does have value... the PROBLEM is there is no discussion of any pending legal actions against the company, any smart buyer would pursue that in their due diligence, but this is a far cry from buying a bridge in Brooklyn.
Click to expand...

What are you smoking? The man has NO iPhone apps anymore. Apple yanked them all!

This auction of the business including iPhone apps constitutes FRAUD and this man should be going to jail!

he was trying to sell before Apple banned him.

he was trying to sell before Apple banned him.

It's kind of sad that he built a business, and couldn't sell. However, we don't know the circumstances around why he wanted to sell. After all of the correspondence Apple claims to have sent him, he may have seen this coming. Or, seen litigation coming.

It is good that no one bought it, and had this happen right after buying.
B

This whole thing sounds like fraud to me.. If he stated 5 employees and now has a lot more in a short amount of time. Frankly, it very suspect oriented. Pay a $5k deposit just to discuss it? Sorry... but honestly this whole thing pops up a ton of red flags for me!

Betcha he has a rich dead uncle in Nigeria as well, with no place to send his million dollar estate. What to do...what to do.....

One of those 1400 apps is a ripoff of my app iFight. He sold it for $5. Just checked the app store and it is gone. Had I known that this is what he was doing I would hate complained to Apple a long time ago. I have seen an increase in sales as of last week I wonder if that is when his apps got taken down.

This whole episode is a business case for the old saying, "if it seems to good to be true, it is!"

I just love the whole "$5,000 for specifics about the company"