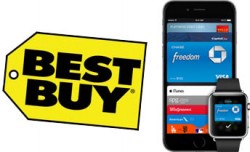 Best Buy has accepted Apple Pay for in-app payments since April, and now the U.S. electronics retailer has begun rolling out the iPhone-based mobile payments service in stores.

Best Buy is now permitted to support Apple Pay, Android Pay and other NFC payment services after its three-year exclusivity period with payment consortium Merchant Customer Exchange (MCX) expired in August. MCX has developed its own mobile payments service called CurrentC, which some retailers began testing in August but may not see a broad launch until 2016.


Best Buy has not officially announced Apple Pay availability at its U.S. retail chain, but the company did confirm in April that it would roll out in-store support later in 2015. Best Buy joins Rite Aid, Meijer and other retailers as MCX members that now accept Apple Pay, but others such as Walmart have no plans to support the service.

So using a discover card there will get you 10% off?
Reactions: einmusiker and nrose101
Comment

It is rolling out to all stores now. It actually started back at the end of August.

It will complete the rollout on September 28th.

The store in the video is Roseville, CA and they have had it since 9/2

I'm not a big Best Buy shopper but I'm happy to see they have this rolling out. The more bigger chains accept this payment type the better. I'm more ready for the grocery store but it looks like I will be waiting a while there.
Reactions: Da Hurdler and Elbon
Comment
2

On monday I picked up a prescription at riteaid and they are now fully supporting ApplePay. As much as I have complained, I see the tide starting to turn as more and more big names are supporting ApplePay. I was actually at the farmers market, where most vendors use square, and a couple of them said they planned to upgrade to the reader that will accept apple pay. So things are looking up in the US for contactless payments!
Reactions: Da Hurdler and Elbon
Comment
D

Hooray! Now that guy that commented yesterday on the Discover 10% Apple Pay post can go buy his fridge!
Reactions: its93rc, mel823, gusapple and 4 others
Comment

I don't shop at Best Buy as much as I used to (mostly thanks to the iTunes store), but I'm happy to see more retailers supporting Apple Pay. I'll definitely use it the next time I'm there!
Comment

Cuban Missles said:
On monday I picked up a prescription at riteaid and they are now fully supporting ApplePay.
Click to expand...

Nice! I prefer RiteAid to CVS anyways, so this is great.
Reactions: iapplelove
Comment

It's bad publicity for companies to come out and state that they have no plans to accept Apple Pay, or any other mobile payment service. If I had a choice, the only card I wouldn't use Apple Pay with are AMEX preferred and everyday cards, since they are translucent and it's cool to use those more than it is the phone. I'm glad to see Best Buy beginning to accept Apple Pay not only in stores, but also in the app as well. I bet the next major retail announcement will be Target.

After Apple announced Apple Pay last October, I always look closely at the kind of point of sale systems merchants have set up. It seems like most food places have such stupid terminals, such as Arby's, Pizza Hut, Papa John's, etc, all have terminals that won't be compliant with the new regulations on October 1.

I'm not sure why it's so hard for multi-billion dollar companies to invest into consumer facing terminals with screens, NFC capabilities, and chip card slots.
Comment

Sometimes you can find better deals on Blu-rays there than Amazon.
Reactions: dampfnudel and gabo864
Comment

This plus 10% cash back from Discover will be nice this holiday season.
Reactions: eagles2214
Comment

They're based in Minneapolis so they're everywhere (doesn't hurt to support a local company that employs thousands locally). They match Amazon prices and I can get it same day (same day Amazon delivery is coming in a couple months now that they're building a ton of new distribution facilities here). They also often beat Amazon prices on some items like hard drives.
Reactions: dampfnudel, xmichaelp, HVDynamo and 2 others
Comment

Apple Pay is great and I use it everywhere it's available. However I think the biggest stumbling block will continue to be the non-chain stores. Will my vet use it? What about the local florist when I screw up and get flowers for the wife (which isn't common)? Once they start implementing it, then it will really be ready for primetime.
Reactions: coolman13355
Comment

Still need it at:
#1 - Market Basket (major New England grocery store chain)
#2 - Gas Station (any brand will do - I'll immediately become a loyal customer if they have one near me and accept Apple Pay. Well, loyal up until a more convenient or cheaper location accepts Apple Pay.)
Comment
P

I will assume you are not an adult then....

There are only a handful of places anymore that sell Appliances where I live. You are either stuck with the big Home Improvement stores, Bestbuy or one of the high end specialty places (which I can not afford). Best Buy often times has the brands I want for a price that beats the competition.
Reactions: nrose101
Comment
B

Or buy Apple gear at the Apple Store with ApplePay.
Comment
J

Yes! Finally! I know there's a lot of hate for Best Buy, but I always save a bunch of money there.

This, combined with the Discover 10% cashback, and then combined with Best Buy's reward points program, will save me a TON of cash this holiday!
Comment
R

For me, it's either
1) I want to try a gadget out before committing, then just buy it on Amazon when I decide (I've started doing the same with Walfart). Or...
2) I need an item they sell and need it that day, and can't wait until Amazon delivers it. I was helping my dad redo his sound system in their basement a couple weeks ago and he needed speaker wire. And I doubt he wanted to wait for Amazon.
Comment