Aspyr Media, the company responsible for the porting of a number of Windows games to the Mac platform, has taken the notable step of embracing Apple's Mac App Store, potentiality leading the way for a surge in gaming interest that could drive growth on the new app marketplace. For its debut, Aspyr is offering Call of Duty 4: Modern Warfare and Civilization IV: Colonization, two notable titles from the company's library of games. Aspyr has told us that it is planning to bring "many" of its titles to the Mac App Store, although some of its games do not meet Apple's current requirements for Mac App Store offerings and will thus be unable to make the transition in the immediate future. 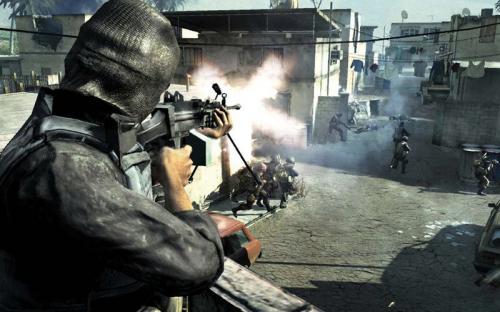 Call of Duty 4: Modern Warfare
Call of Duty 4 made its debut on the Mac platform in September 2008, but remains a popular first-person shooter title among Mac gamers. Weighing in at a massive 6.85 GB in the Mac App Store, Call of Duty 4 offers players an immersive gameplay environment and a well-regarded storyline.

Featuring a tense storyline, filled with plot twists, Call of Duty 4 thrusts players into battle like never before. With amazing special effects, including rim-lighting, depth of field, texture streaming and character self-shadowing, players are enlisted into one of the most photo-realistic gaming experiences imaginable.

The community-oriented Call of Duty 4 multiplayer gameplay features a robust leveling system, variety of unlockable perks, hot-join and matchmaking, as well as create a class and party capabilities to ensure that players of all skill levels can join in the fun. Additionally over 100 challenges and a host of new game environments and modes deliver unlimited possibilities. Infinity Ward has also included Kill-Cam, a fan favorite feature that they created in Call of Duty 2, which allows for spectator instant replays.
Click to expand... 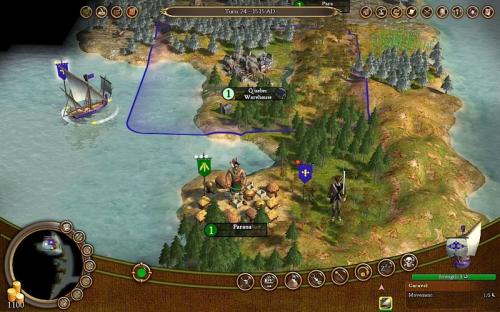 Sid Meier's Civilization IV: Colonization is the fifth offering in the award winning Civilization IV series for the Macintosh. A re-imagining of the classic Colonization strategy game Sid Meier created in 1994, this provides a new game experience in which you lead a European nation on a quest to colonize the thrive in the New World. Explore, trade, fight, and guide your people from the oppressive motherland. Ultimately you can battle for your freedom and independence!
Click to expand...

One issue with the two new releases may turn out to be pricing, with Call of Duty 4 going for $49.99 on the Mac App Store. While this is below the standard $54.99 list price for the game, boxed copies of the Mac version of the game are currently going for only $32.56 on Amazon, although some users may prefer the instant access and easy installation on multiple machines permitted with Mac App Store purchases. Civilization IV: Colonization is currently priced at its standard list price of $29.99 in the Mac App Store, but Aspyr itself is currently offering the title at a promo price of $23.96 through its own GameAgent store and Amazon is offering boxed copies for $19.27.

Aspyr and other developers are of course subject to Apple's policies of taking a 30% cut of revenue from Mac App Store sales, making it more difficult for developers to match pricing found through other channels such as Amazon that take smaller profits. But the convenience of the Mac App Store's purchasing, installation, and updating capabilities may serve to draw in users and help drive the growth of the gaming market within the store.

I wish BlackOps was released for Mac

A bit random with Call of Duty 4.... Surely they'd want their most recent title Modern Warfare 2 on there first? And then add the older games.

How are patches/updates handled?
Would the entire 6GB app need downloading again?

Not such a worry with small normal apps on the store but a 6GB app is fairly hefty!

Good news either way, but ill stick to Steam for big games, even if I have to go into Windows for some of them. More Mac games for Steam!

Not such a worry with small normal apps on the store but a 6GB app is fairly hefty!

Good news either way, but ill stick to Steam for big games, even if I have to go into Windows for some of them. More Mac games for Steam!
Click to expand...

Is that how updates are handled on iOS? I've never really given it any thought. So I download the whole app again? Or just an update?
M

Weird how Apple promote a game that was originally released in November of 2007 and we all sit here in wonder... ooooh... ahhhh.

Seriously, now that Apple has a great delivery system for games, they need to work with developers to encourage development of games for OS X.

Why haven't these hit Steam for Mac? This is not cool.

I wonder why they didn't put Civ5 too :/ Do they have an exclusivity deal with Steam or something?

Did that Harry Potter Lego game get taken down? That was $49.99 too.

If anyone can comment how CIV IV runs on 11.6 Macbook Air, that would be much appreciated.
A

Dagless said:
Why haven't these hit Steam for Mac? This is not cool.
Click to expand...

Civ5 is also on Steam for Mac.

Not sure why CoD4 isn't on Steam for Mac, but I remember reading something about how Aspyr(guys who ported it) wouldn't get anything for the game if it was sold on Steam. I believe it has to do something with Activision/Infinity Ward.
Last edited: Jan 14, 2011

Interesting, but how do updates work?

Surely it's not the same as the iOS App Store where the entire application has to be downloaded again for even the smallest of changes?

LOL! Are you being serious?

Let's compare here. Apple's "App Store" which has no gaming community, no messaging system, no server browser, no sale system, and is brand new vs Steam, a platform embraced by every major and indy publisher and gamers on Mac AND PC. The fact that the App Store is OS X only will make it a niche gaming market at best. I think it will blow up for casual-indy games but why would I buy Civ4 on the AppStore when I can play it on Mac and Windows using the same license key on Steam (which yes, you can do right now with Steam).

If anything, I think Apple should redirect gaming interest to the Steam platform, but I guess a deal like that would be unprecidented for them.

This is fantastic. Keep it up Apple.

Can we install on multiple macs like on iphones (you can install on a bunch of iphones as long as u use same logon) ?

Messy said:
Weird how Apple promote a game that was originally released in November of 2007 and we all sit here in wonder... ooooh... ahhhh.

Seriously, now that Apple has a great delivery system for games, they need to work with developers to encourage development of games for OS X.
Click to expand...

Where is Black Ops?

But I thought APPLES weren't for gaming! [/s]

That's great and all, but can it run Crysis? *obligatory wink*
P

Why are the Games US-only!? Really sucks to not be able to find them in the german store.
E

If by COD4 you really mean COD:BO then yes.
A

Not such a worry with small normal apps on the store but a 6GB app is fairly hefty!
Click to expand...

Exactly what i was wondering.


Pechente said:
Why are the Games US-only!? Really sucks to not be able to find them in the german store.
Click to expand...

It appears in the UK store.
W

I find it interesting how Apple, who's main philosophy in creating the App Store for the i devices, was to limit fragmentation and control quality by forcing all applications to come through one channel. This way, all users would benefit from a single source to browse for applications, without having to worry about price shopping, or apps that might brick their devices, and such.

It seems that the Mac App Store is creating even more fragmentation for OS X. Now I have yet another place to shop for software. Mac Games Arcade, Steam, Mac App Store, retail shelves, Online distributors, bargain bins... Where am I supposed to look?

I think the best solution - honestly - would be for Apple to force developers to use the App store. The App store (for i devices) has proven to be a great way to get your application out there, with free marketing and distribution. I don't see why any developer wouldn't be on board with this.

The only challenge here would be quality control vs the open system. I still want to be able to install a system extension, or add-on that might customize Mac OS X in some way Apple didn't intend, but on the same hand, I wouldn't want someone posting a free App advertising a new screensaver that would erase my hard drive on launch. If they could find a balance there, I think everyone would benefit, as they have on the iDevices.