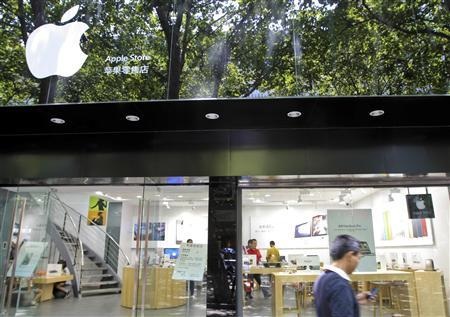 Chinese authorities have discovered another 22 unauthorized Apple resellers in the city of Kunming, according to Reuters. The world's most famous fake Apple Store is also located in Kunming. The 22 stores were ordered to stop using Apple's logo by China's Administration for Industry and Commerce.

The market watchdog agency said it would set up a complaint hotline and boost monitoring, the official Xinhua news agency reported.

It did not say if the shops were selling knock-off Apple products or genuine but smuggled models.

Countless unauthorized resellers of Apple and other brands' electronic products throughout China sell the real thing but buy their goods overseas and smuggle them into the country to escape taxes.
Click to expand...

It's the only place you can get a hiPhone 5.
Comment

Wow!!! The chinese are quick! I was hoping to find one of those stores when I go to China in Q4, but I guess all be gone by that time.
Comment
M

I didn't notice that; just in one city. So I'm still hopeful to find a fake Apple Store when I go to China.
I may get a HiPhone 5 too.
Comment

So they "found" all of these stores - as if they were not right out there in the open all along. Ahem.

Perhaps some will be left and I can get a fake Macbook Air made out of sawdust and bits of old hoof.
Comment

Do the stairs on that picture lead to nowhere? There doesn't seem to be a second floor.
Comment
M

Someone should check xi'an. I saw two there on just one street last month.
Comment
N

Meanwhile chinese hackers requited by the (unbelievably) corrupt government and country, practice their skills for the coming cyberapocalypse
Comment
B

They should do similarly to the 80s fakes and call them 'Pineapple' Stores. First person to dig out the old fake logo will get a 'virtual' Smartie.
Comment
B

I have lived in Guangzhou China the past 6 years. I haven't posted on MacRumors in a very long time (at least 7 years) and actually had to make a new account to throw my silly opinion out for everyone to read.

When I first read this story on macrumors and yahoo about the fake Apple stores in Kunming, it surprised me, in that, this is news? You wouldn't believe the amount of copy Apple stores where I live here in Guangzhou, for years now. I read that story and thought, why is this getting press? This is business as usual for China. You visit any major city in China, and likely many of the smaller ones, I'm pretty well traveled in China, and you will find any number of copy Apple stores. Now, they all sell legitimate Apple products from my experience. I have NEVER seen a knock off Apple laptop or desktop sold at any of these stores. It just doesn't exist. It would be too cost prohibitive for the Chinese to come up with a replica close enough to the original to make any money. These knock off stores are, in my opinion, taking advantage of the popularity of the Mac platform over here and filling a need. iAnything and Mac anything is HUGELY popular at the moment. Apple only has a few official stores in China right now and where there is a desire for something, there is someone willing to fill that. They sell all their products in these fake Apple stores for the same price as you could order them on Apples official Chinese online store. As Apple expands it's presence in China, these knock-offs will slowly disappear for sure. Until then though, it only benefits Apple, and the average consumer in China certainly doesn't know the difference between a true Apple retail store and a fake. Even the employees believe they work for Apple if I read the article correct.
I'm not saying this is good or bad, it just is. I would never buy an Apple product from them personally. China puts a very high tax on all Apple products. For all my Apple needs, I take the 3 hour bus trip to Hong Kong which sells everything at about American prices, minus the sales tax.
There are certainly fake iPhones and iPods to be bought in China, but anyone with a brain knows they are fakes. The market in Guangzhou called haiyin guangchang will do their best to confuse you, but any moderately savvy user will know the difference.
Just my two cents!

I loved John Gruber's take on this story.

"Thats twice the number of legitimate Microsoft stores."
Comment
B

BrianHut84 said:
Until then though, it only benefits Apple, and the average consumer in China certainly doesn't know the difference between a true Apple retail store and a fake. Even the employees believe they work for Apple if I read the article correct.
Click to expand...

It also benefits the people running the scam in the first place.

Ade-iMac-177 said:
Do the stairs on that picture lead to nowhere? There doesn't seem to be a second floor.
Click to expand...

I love that 22 high profile fake store can go unnoticed. It's Sooo old west and awesome to me.
Comment

I wonder how many are owned by the same people? Quite a good little money earner!
Comment
B


batchtaster said:
It also benefits the people running the scam in the first place.

Yes, they certainly do profit, but they are almost no different than someone running an independent Apple retail store in America, that sells the same products for the same prices they do. The major difference is here in China they have stolen Apples retail store design IP. Wrong, of course. But in Chinese culture, which is wildly different from Western culture, stealing IP is not considered a crime at all. It happens every day in every facet of life in China. They don't think about it morally or ethically like our culture might but only economically. Someone has a good idea that works, copy it and slightly modify it for the Chinese market. It happens EVERY DAY. They have copied everything from IKEA store design to Chilis logo. A quick google search will enlighten you to what the Chinese have copied and modified to appeal to the Chinese culture. From my very small research, China is in the position Japan was in some 20 to 30 years ago. Remember when "made in Japan" was a big joke in America? Now "Made in China" is the big punchline for low quality and cheap production. In my opinion, China is coming into it's own, just as Japan did, and will in time, take it's place in the world as an economic super power, producing the majority of the goods the world needs, and producing them of the highest quality. This will take time however and western technology, quality, and ingenuity will be the main factors that influence change. As China stands alone, they are completely paralyzed due to Chairman Mao, as far as education, free thought, science, art, politics, philosophy, and many other subjects we take for granted in the west are concerned.
Case example. My very educated and unique Chinese girlfriend does a weekly Chinese trivia night here in Guangzhou. Just last night one of her questions was, what is this famous landmark? She showed a very typical picture of the forbidden city in beijing. Possibly one of the most recognizable structures in the world. Of 8 Chinese teams, 3 of them incorrectly named the picture. My point being, the restructuring of China via Chairman Mao set them back many many decades. Free thought is a very foreign concept to the Chinese. They were raised to follow a very strict regiment and that's all they know. Only the basics, Math, language, history (which is wildly biased), and a few other core subjects are taught in school. Imagination and creativity in people is so far and few between due to the system everyone is brought up in, and the existing system which simply copies what is successful in the west.
I have probably rambled on way to much for sure. I guess the final point is, while the smugglers are wrong, they are just doing what they know. They don't have any concept of right or wrong. They are just people filling a need trying to make a few bucks. Don't begrudge them too much, as, if you were in the same position, you may do the same. Don't get me wrong, I am the biggest critic of the way the Chinese conduct their business, but you still have to stand back sometimes and see things from their perspective.

re chinese govt cracking down

nip those fake stores in the bud

BrianHut84 said:
Stereotypes don't come from no where. With personal knowledge, the previous poster couldn't be more correct. Are all Chinese people nothing more than copycats with no personal creativity or intelligence? No. But due to factors beyond their control, the majority are. Absolutely no doubt about it. China is a country of mindless drones, brainwashed from birth.
Click to expand...

China has lax laws regarding copyright, people are inevitably going to try to make money off making fakes since they can get away with it. There are people in every single country that would do the same if they could get away with it. But to call the majority of 1.4 billion people "mindless drones" is beyond insulting.

The entire country of China is not yet as fully developed as many western societies but they continue to make great innovations in high technology in such areas as biotechnology, high performance computing, medicine, space exploration, and all areas of Engineering. A quick google search will confirm this.
Comment
You must log in or register to reply here.
Share:
Facebook Twitter Reddit Email Share Link
Register on MacRumors! This sidebar will go away, and you'll see fewer ads.
Sign Up
Top Bottom