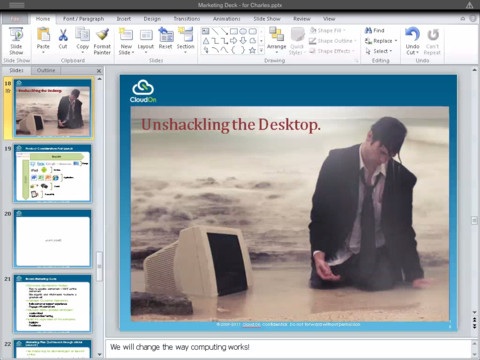 Silicon Valley startup CloudOn today released a free iPad app [App Store] that aims to bring the functionality of Microsoft Office to the iPad. The iPad app actually serves as an interface for the full cloud-based app on CloudOn's servers, and thus requires an Internet connection to function, but offers what seems to be a remarkably functional implementation of Microsoft Word, Excel, and PowerPoint, all integrated with file storage and syncing through Dropbox.

CloudOn's WorkSpace allows you to:

-Use Microsoft Word, Excel and PowerPoint on your iPad to create or edit documents.
-Rename, delete and manage documents with your Dropbox account
-Display, edit or create charts, change formatting, spell check, insert comments, into any Word, Excel or PowerPoint files
-Track changes while reviewing Word documents
-Use pivot tables and insert formulas in Excel workbooks
-Display and edit animation or transitions in PowerPoint presentations
-Present in full PowerPoint mode (not in PDF)
-Open files directly from your iPad email accounts or Dropbox account
-Automatically save documents to avoid losing changes
Click to expand...

In our limited testing, the app appears to function as advertised, offering the Office-style ribbon toolbars with a significant number of features and tools included. Given the constraints of operating on an iPad and via a cloud-based interface, however, there are some limitations such as an inability to insert outside images into a document via the interface. The app is also currently U.S.-only. 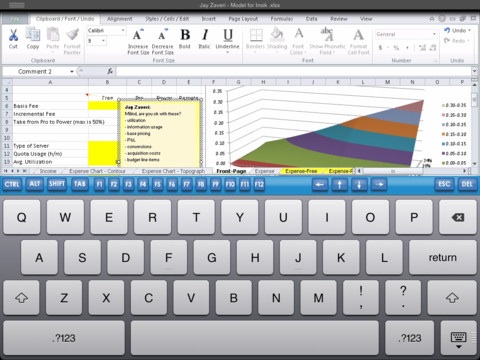 The CloudOn company itself is a bit of a mystery, with little in the way of publicity or web presence. Founded in 2009 as AppToU by several former Cisco employees, the company has attracted several rounds of financing as it has quietly built its cloud-based tool for delivering Office functionality to the iPad.

Microsoft has acknowledged at least exploring the possibility of bringing Office to the iPad, and recent rumors have suggested that the company is "actively working" on Office for iPad.

Update: The CloudOn app is currently "sold out", likely due to high levels of interest from users.

So it's a VNC client?

Sort of muddying the already unpalatable waters of the term "cloud".
S

Love these kinds of posts. Helps me build up my free app collection.
B

LOL. Steve would be turning over in his grave. F1, F2 buttons on the toolbar: LOL!!! It's been a while since I saw anything that dumb!

No kidding, just VNC. About as lame as Amazons cloud enhanced browsing.

How is that people working in Silicon Valley can pay such outrageous rent when they make lame products like this? I'd worry for the VC. $10 from Apple gives a much better experience per App and you can use it on a plane.

I tried this out with a few documents, and it seems pretty good - if not a little laggy. It's a neat idea...I just wish I understood how they make money.

From a privacy side, it seems that I'm effectively uploading my documents to their server. I'm not sure at this point what they're allowed to access or do with that information.

All that said, I like the concept and functionality. Totally caught me by surprise today.

It's currently US Only (something that should be mentioned in the article)
Apart from that, it's a terrible app and I can't imagine using it in preference to Pages (which is how tablet word processors should be done.

US App Store only?

benspratling said:
LOL. Steve would be turning over in his grave. F1, F2 buttons on the toolbar: LOL!!! It's been a while since I saw anything that dumb!
Click to expand...

Considering it's the desktop version of Office running on your iPad, you kinda need those function keys.

So how is that dumb?

That Ribbon mess. Now available in the cloud.

benspratling said:
LOL. Steve would be turning over in his grave. F1, F2 buttons on the toolbar: LOL!!! It's been a while since I saw anything that dumb!
Click to expand...

And the horribly small size too.
C

how is it even legal?
I

Two steps - create a username and password, link my Dropbox account. Editing a spreadsheet in a familiar environment instantly.

This has potential.
A

Considering to buy the Pages App, but how good is it working with Word Documents? Writing in Arial I cant see Fonts beeing the Problem, but whats with the Text structure?
Cheers
C

CloudOn. Nobody has made fun of this name yet? Like, having one? Or taking a pill for one?
N

I'm sorry but this is just terrible compared to Apple's direction with Pages, Numbers, and Keynote on the iPad.

Apps for tablets need to be completely redesigned to take into consideration the smaller screen and the use of a finger for input instead of a mouse. What the apps should share is compatibility of features, not the interface implementation.

Features need to be compatible between each other to prevent any problems of creating something on one interface and having it stripped out on another. That the only problem with editing and syncing documents between computers and devices in the cloud. But that's about it. A desktop interface simply should not be dropped onto a tablet.

Microsoft's problem is going to be how in the heck do they put all the crap load of features in Office onto a tablet without making it cluttered up like this CloudOn solution is doing.

Apple is in a good position with its iWorks suite because they have less features to integrate onto a tablet, thus making it viable that they can pull it off. They are almost there, but not yet. And I don't think they are planning to add any more features to the desktop version until they get feature parity with the iOS devices.
C

Renzatic said:
Considering it's the desktop version of Office running on your iPad, you kinda need those function keys.

The only reason the buttons exist is because "it's the desktop version." And that's precisely the problem. The desktop version was designed for a cursor, not fat fingers. Remember the pre-iPad Windows-based tablets? Neither does anyone else. The reason is because the interface was like this: desktop-based, with no modification for touch.

With cloud computing there are also legitimate privacy concerns with big-name companies, of course, but we know even less about this company.
K

I'm happy if tools like this serve some people's needs and they find them useful (especially at a price of free). But even if it remains free (probably with a requirement of looking at advertising of some sort?), I wouldn't use it myself.

When I'm working on something as basic as a text document or editing/viewing spreadsheets, I don't want an active Internet connection to be a requirement. This stuff ran just fine on even the earliest 8-bit computers, so I don't see why NOW, the "in" thing involves serving it to us via the "Cloud"?

I can still save my documents themselves on Dropbox or elsewhere, and have access to them from anywhere. But I'd rather have the applications usable at any time. There's a good chance that I'd sit down and spend time writing something in situations where I didn't have any net access to distract me!

cakebake said:
how is it even legal?
Click to expand...

It's perfectly legal if it is running a licensed version of office on the cloud. The question is, how does CloudOn pay for that licensing when they aren't charging the customer anything, and it doesn't even seem like they are doing any advertising?


pewra said:
So it's a VNC client?

Sort of muddying the already unpalatable waters of the term "cloud".
Click to expand...

Yes and no. A VNC client typically shows a user's entire desktop, but this is just showing one application, so it's more Citrix/XenApp like than VNC. But the idea is correct.

Still, it is very much a correct usage of the term "cloud". The idea of the cloud is the application is running on-demand out on a server somewhere that is typically spawned on-demand, to fit in the "pay as you go" model. It doesn't really matter if the client interface is VNC, webpage, or whatever. The application is still running in the cloud.
T

longofest said:
The application is still running in the cloud.
Click to expand...

You mean a server.
Lets get real here, 'cloud' is just a buzzword for servers.
Nothing more than what they had in the 60s/70s/80s with thin client terminal computing.
M

I work for a company that does something similar (www.iongrid.com) and, while our customers want limited editing, none of them really expect to use the full Office suite on their iPads.

Instead, the biggest thing they want is a) an iPad-native interface, b) offline access, and c) access to shared directories. (We work with large companies, so DropBox doesn't work as a share; they don't trust hosted storage.)

Unfortunately, while it's a cool VNC trick, I don't think it will meet the real user needs.

Sluggish as hell, even on a good wifi connection. I think it'll suck on 3g. However, it's one helluva good start and really a nice interface for those who miss MSO. The direct edit into Dropbox with the autosave is the coolest part of the whole thing. I like not having to download the file into an app, email to myself and then put it back on dropbox, or use 3 or more apps to do one thing. i'm really migrating more and more to Pages but there is still a need that can be filled with this. If they fix the sluggish response, it'll be awesome.
You must log in or register to reply here.
Share:
Facebook Twitter Reddit Email Link
Top Bottom