iDownloadBlog points to a new YouTube concept video showing one user's idea of how Apple could vastly improve the text editing functionality on the iPad and other iOS devices. 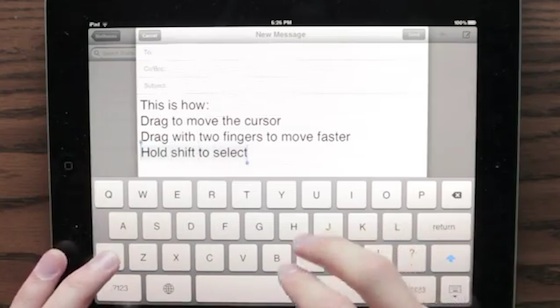 While the current method of text selection involves tapping and dragging around the screen to select cursor position and highlight text, Daniel Hooper suggests that Apple could make use of gestures in the keyboard area of the screen to easily move the cursor in text fields. Simply holding down the keyboard's shift key while gesturing would easily select sections of text for editing.

The suggestion is of course not an official product of Apple's software designers, and so Hooper has also provided instructions on how to use Apple's bug reporting system to suggest the feature to the company's engineers. Apple maintains a policy discouraging users from submitting unsolicited ideas, but notes that it retains the full rights associated with ideas that are submitted to the company.

Apple absolutely HAVE to integrate this into iOS. Editing text in messages/emails is painfully slow, awkward and cumbersome at present.

Saw this on Engadget....just looks awesome, It would make using the iPad so much better!
T

This would break the keyboard for many non-English languages.

That is so much better than what exists now. It has been a pet peeve of mine since I got my iPhone how much of a pain in the ass it is to correct typos.

Unrelated: Why the obnoxious music blasting me when I load the video?

thats pretty slick there ... not sure why this has not already been implemented. I would think this would of been something looked at from the very beginning


TvdW said:
This would break the keyboard for many non-English languages.

Interesting concept, but this is more complicated than the current method which means Apple won't implement it. Editing could certainly be improved but they're not about to make something more complex, Apple simplifies.


DraziGuy said:
Unrelated: Why the obnoxious music blasting me when I load the video?
Click to expand...

It's a requirement for all YouTube videos: play music nobody wants to hear
U

That is seriously awesome, kudos to the people that developed that. I hope Apple take a look at the video, I'd love to see that in iOS 6

Okay, that's actually a pretty sweet concept. I hope Apple sees this and adopts it into iOS.
D

There's a nice compromise: be able to turn the feature on or off in the Keyboard settings.

Superior idea! I'd LOVE to see this on iOS6. Fingers crossed

Okay, this is such a good idea.

And maybe they could add a forward delete key while they're at it.

A rather genius idea. Apple need to get this done.

I really like the idea. I don't think it's that much more complicated a system than what's already in place. The problem with the current selection process, especially on the iPhone, is that it's hard to see what you're selecting. The little magnifying glass doesn't always work as it should, and often my finger is in the way of seeing the text. Swiping the keyboard makes a lot of sense.
R

*after watching the video*

"I told you we should have hired him, Larry." -Apple designer 1

"But he was slowest in answering the highest floor he could drop an iPhone without breaking it!" -Apple designer 2
R

I'd *love* this, but, just to play devil's advocate a bit:

1) This would likely interfere with the existing tap/hold function of the keyboard (most keys will offer other characters if you tap and hold on them). Not everyone (especially most of Apple's iPad demographic) is as quick about things, so they could easily trigger the foreign character picker accidentally. It's definitely not "Apple-ish" for the "other characters" selector to pop up on a key while you were trying to select text.

2) The two-finger gesture wouldn't really work non-iPad iOS devices, because most (IMO) users just type with their thumbs. It could just be an extra gesture on the iPad, though.

Awesome idea, I freaking hate editing text on iOS. Also, it would be great to have a button to quickly turn AutoCorrect on and off. I hate that thing, it only works well in English. In other languages it just suggests random words with absolutely nothing in common with what I wanted to type.
G

I'd very much like to see this - would greatly reduce the need for a physical keyboard.

I really would like to see this implemented on the iPad, but might not be practical on the iPhone.. On the iPhone you swipe in the keyboard to quickly select another key, because the keys are too small that you're likely going to make mistakes.
G

Apple, hire this person and incorporate this idea. Now. I love it.

What a great way to apply for a job at Apple as a UI designer!

TvdW said:
This would break the keyboard for many non-English languages.

I dont know why youre being voted down for this. Youre absolutely right. As a German, I make use of the swiping up gesture on certain lettres to get a special character. This would likely sometimes interfere with the idea to swipe up if you want to go up with the curser.
You must log in or register to reply here.
Share:
Facebook Twitter Reddit Email Share Link
Register on MacRumors! This sidebar will go away, and you'll see fewer ads.
Sign Up
Top Bottom