Last week, Nowhere Else began receiving reports [Google translation] from owners of the white iPhone 3GS that had experience significant overheating, leading in some cases to distinct pink or brown discoloration on the iPhone's back case. A later report from Wired suggested that faulty battery cells may be the cause of the overheating and could lead to a significant recall of the affected iPhones. 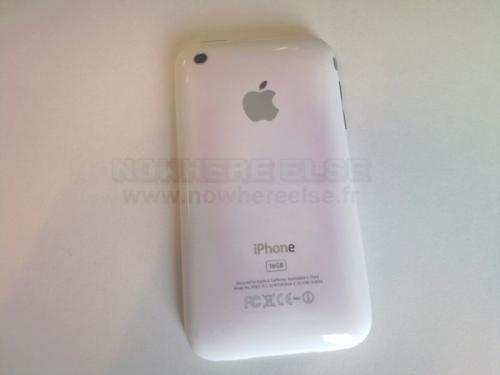 Image from Nowhereelse.fr
A number of reports today have pointed to an Apple support document providing advice on how to keep iPhones from overheating as an acknowledgement of the problem on the part of Apple. As Macworld points out, however, the document was originally posted many months ago, and was recently updated only to add references to the iPhone 3GS to the existing ones for the iPhone 3G. According to the Apple document, an overheating iPhone will display a warning screen and become inoperable with the exception of allowing emergency phone calls to be made. Apple also describes several situations that can lead to activation of the temperature warning screen.

While heat is definitely a concern for any electronic device, particularly ones like the iPhone that pack a significant amount of power into a small space, Apple assures its iPhone 3G and 3GS customers that the devices do meet international safety standards for such devices. At this time, Apple has made no official response to these latest reports of overheating and discoloration on the new iPhone 3GS.

"GPS tracking in a car on a sunny day"

So no SatNav in California, for example.

They rushed it out again.

Listening to music in the sun...

No one would ever do that!
N

Another reason to wait until 2010.

woops..guess cant listen to music while sittin on a bench, or gps while driving..

Umm, but this is for white iPhones only... so I won't mind. I'm going to get a black.

Heat? Wow, they even have an App for that.
A

That discolouration... is terrible!

I think white, and black plastic looks tacky. The only thing worse is glossy black!
I wonder if the black version will do the same thing over time, with a greyish discolouration.

You racist! (just kidding by the way...hahaha)

Its not heat, the iPhone is blushing from all the naughty naked bodies on it.
M

I'm guess it affects them just the same, only it's harder to tell, crashes and errors aside.
I

meh put your hand on an apple tv...that thing is burning all the time...

Who would drive a car on a sunny day anyways?
M

djellison said:
"GPS tracking in a car on a sunny day"

So no SatNav in California, for example.

Talking to someone late last night for about 45 mins. I noticed the phone was getting very warm, so I ended the call and took off the phone.

I do not notice any discolorations though.
I

ryhno45 said:
Talking to someone late last night for about 45 mins. I noticed the phone was getting very warm, so I ended the call and took off the phone.

I do not notice any discolorations though.
Click to expand...

my samsung gets high after a half hour call as well..

the phone will be hot...thats to be expected..

hot to the point of not picking it up = not to be expected.

The phone is designed with GPS and ATT sells their GPS service. Its not viable for Apple to avoid and not acknowledge this specific problem.
D

That's an interesting pattern of discoloration. I wonder if it provides some clue as to what's happening. For example, does the battery touch the case in those places? Also, is there some way this might be color transfer from a case? I've only seen two pictures so far, so it could be something simple like that.

For what it's worth, I know about four people with new iPhone 3GS's, and no one has experienced any excess heat.

Too many features for such a small device to push. Now faster!

DocStone said:
You racist! (just kidding by the way...hahaha)
Click to expand...

You have to actually put more feeling into it, like so:

Grimace said:
Listening to music in the sun...

No one would ever do that!
Click to expand...

I don't know about you, but I very rarely expose the music playing device to direct sunlight.

Just a nostalgic habit - you could kill your tapes with direct sunlight back in the days, you know

Possibly Good news - I got a white one because that was all was in the store at 32Gb but I am starting to regret not sticking with black - If it turns pink it's going back and I'll get a black one.

swagi said:
I don't know about you, but I very rarely expose the music playing device to direct sunlight.

Just a nostalgic habit - you could kill your tapes with direct sunlight back in the days, you know
Click to expand...

Molten cassettes does take me back.