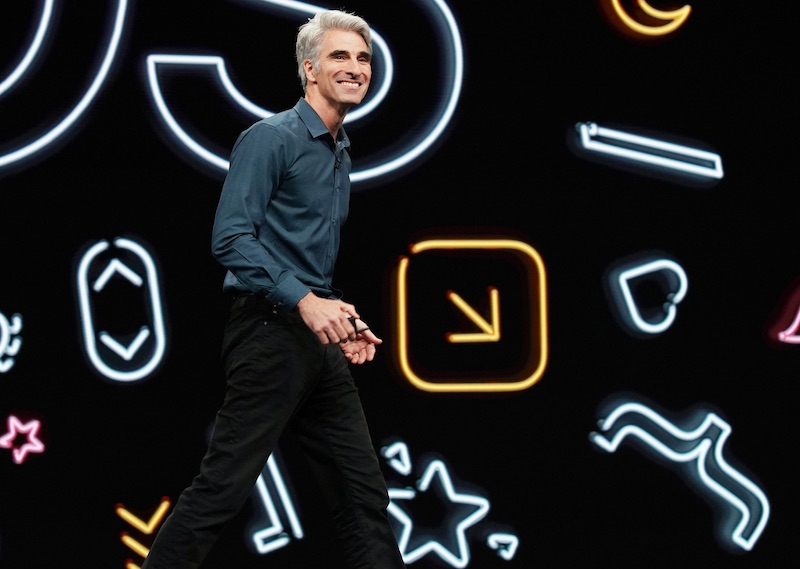 Craig Federighi at WWDC 2019​
Project Catalyst will make it much easier for developers to extend iPad apps to the Mac. In many cases, adding macOS support to an iPad app is as easy as opening an Xcode project and clicking the Mac checkbox, although Apple encourages developers to further optimize their apps to offer a true Mac experience.

Federighi believes Project Catalyst will allow many developers to bring their iPad apps to the Mac, as Apple has bridged the gap between its UIKit framework for iOS apps and its AppKit framework for Mac apps:

UIKit and AppKit always remained these two separate worlds, and depending on what a developer did, they could build an app that was sort of factored in a way that they shared a lot of cross-platform code, but they had to always take that extra step of having people on the team that knew AppKit, people on the team that knew UIKit, and make the decision to specialize for those two. And for many developers, they chose one or the other and not both, because that was a real effort to get the expertise and to make the investment.
Click to expand...

Project Catalyst​
Federighi expressed excitement about Project Catalyst, noting that he has seen many apps that look fantastic on the iPad that he has wanted on the Mac. With macOS Catalina and Xcode 11, that is now a possibility, with Twitter being one of several companies that plans to extend their iPad app to the Mac.

He added that Project Catalyst gives Apple the "same kind of benefits of being able to have a single team that can focus on making one thing the best and release it across all of our platforms," which makes "a ton of sense" to the company. 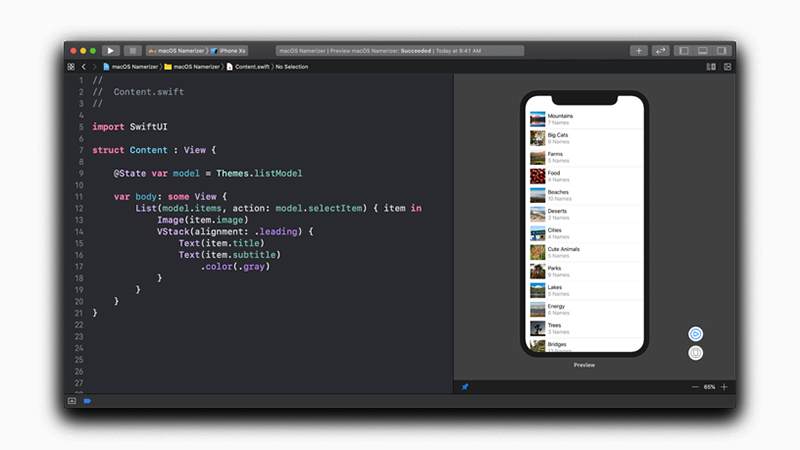 SwiftUI​
As for Apple's new SwiftUI framework, which enables developers to use easy-to-understand declarative code to create full-featured user interfaces, Federighi said giving developers a tool that is "that expressive and that interactive" is going to result in better ideas and thereby better apps moving forward:

SwiftUI will make development of UI more accessible to many people who maybe weren't approaching it before, and that's exciting, because we're already seeing some of that with Swift and Swift Playgrounds. But even for the most experienced of developers, giving them a tool that is that expressive and that interactive is going to mean they're going to build better things, they're going to try out better ideas, and that's going to result in better apps.
Click to expand...

Turning to the new iPadOS platform, Federighi said that the iPad has "become something really distinct from the phone" over the years and, accordingly, was deserving of an operating system that provides a "distinct experience":

Things like Drag and Drop, Split View, Slide Over, Apple Pencil... these are things that really define a different way of working with the device. When I work on my iPad, I don't feel like I'm working on a big phone... or like I'm working on a Mac. I feel like I'm working on an iPad. What we mean when we say macOS, or when we say tvOS, which is an iOS-based platform, or when we say watchOS, which at its core is iOS, these things to us are definitions of experiences. There's a watchOS experience that's tailored for apps that make sense on your wrist. tvOS, a 10-foot UI that makes sense in that context. iPadOS has become a distinct experience. We've been working our way there steadily over time. With the work we did this year, we felt like we were at a place where this truly was a distinct thing.
Click to expand... 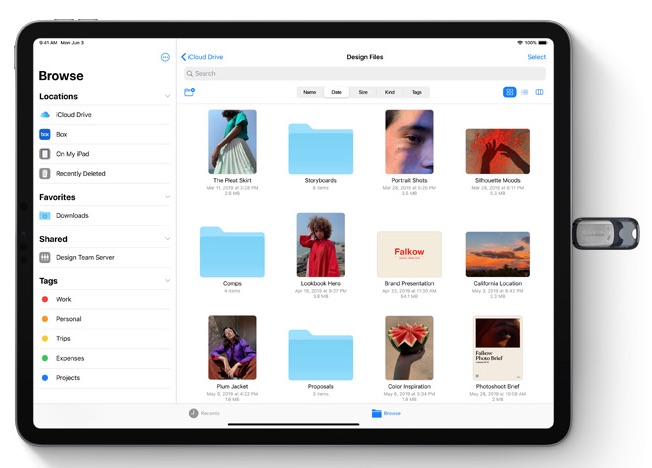 External drives. We're willing to acknowledge the 1990s and go all the way back. You know, people still use them sometimes. I'm an AirDrop fan myself, but I understand there are other uses... we know with photographers, the ability to import their photos directly into an app like Lightroom is so important.
Click to expand...

The full interview can be listened to on the AppStories podcast over at MacStories.

Took them only many years to acknowledge, not a sign of intelligence
Reactions: Yvan256, AccenT, pmore and 36 others
R

This arrogant attitude is what turns off so many people to the point that they don't even want to touch such many great Apple products.
Reactions: AvisDeene, psingh01, TheSkywalker77 and 132 others

AKA, “We tried to scam users to purchase our ridiculously priced storage upgrade options for years.”
Last edited: Jun 7, 2019
Reactions: AvisDeene, AccenT, zemsantos and 85 others

Sadly, I think he is too arrogant to understand why people wanted it... AirDrop? LOL...That's not the point!
Reactions: AvisDeene, rbrian, maverick2075 and 61 others

And I'm willing to spend $65 on a 2TB hard drive instead $120 over the course of just one year for 2TB of iCloud storage.
Reactions: AccenT, zemsantos, pmore and 46 others

Nobody wants to pay 1990s prices for internal storage.
Reactions: TheSkywalker77, AccenT, rbrian and 81 others

Yeah, it's funny how non-expandable systems are limiting and force the user into doing without or finding workarounds.
Reactions: pmore, Mr. Retrofire, Delgibbons and 12 others

I have a sense of humor but that's just mean and bullying. some people multitask better without dealing with ******** hung up connections and wireless problems. doesn't matter what platform. just sayin.
Reactions: travelsheep, AccenT, pmore and 28 others

You know, I miss cranking up the Eminem, tussling my flock-of-seagulls hairdo, and… plugging a USB-C drive into my tablet computer?

Maybe its just me, but I have never wanted to have a drive sticking out of my iPad. Thats like wanting Apple to add a CD slot to the iPod back in the day.
Reactions: TheSkywalker77, J.J. Sefton, mudflap and 6 others
B

radio893fm said:
This arrogant attitude is what turns off so many people to the point that they don't even want to touch such many great Apple products.
Click to expand...

Data to support that?

Or is a market leading position for iPad not good enough for you?
Reactions: sshambles, J.J. Sefton, Yester5 and 20 others
L

AngerDanger said:
You know, I miss cranking up the Eminem, tussling my flock-of-seagulls hairdo, and plugging a USB-C drive into my tablet computer.

And I say that as a fan of Craig.

At least he did acknowledge this:

but I understand there are other uses... we know with photographers, the ability to import their photos directly into an app like Lightroom is so important.
Click to expand...

I just don't like the arrogance. I've seen it from many folks at Apple, going back to Steve. Just because a use case doesn't work for one person doesn't invalidate it for all others.
Reactions: AvisDeene, cmichaelb, shrfu31 and 48 others

"tvOS, a 10-foot UI that makes sense in that context." What kind of TV are you using Federighi??
Reactions: TheSkywalker77, Premium1, sunwukong and 2 others

I especially loved how their showcased External Drive was named "ANCIENT RELICS."
Reactions: MareLuce, mudflap, Gasu E. and 5 others

Ah, the good ol 90’s, before companies really started ripping us off with ridiculous storage tier pricing.
Reactions: AccenT, zemsantos, kierennyc and 31 others

No complaining here from my side. Just nice to see that the iPad and Mac see some heavy OS innovation again. Obviously Apple has enough resources to not only push iOS to some new levels.
Last edited: Jun 6, 2019
Reactions: Kirkster, Codeseven, Sasparilla and 3 others
R

Baymowe335 said:
Data to support that?

Or is a market leading position for iPad not good enough for you?
Click to expand...

It's all good with you Baymowe... we already determined where you come from. All you say is correct.
Reactions: AvisDeene, StellarVixen, Marekul and 13 others
L

balderoine said:
I have a sense of humor but that's just mean and bullying. some people multitask better without dealing with ******** hung up connections and wireless problems. doesn't matter what platform. just sayin.
Click to expand...

To be fair, Steve Jobs was the same way when introducing the iPhone. He called the keypad "Last century." And when introducing iTunes, he said that music rental would never take off. 12 years later, Apple Music launches.
Also, the iPhone still has a keypad
Reactions: PC_tech, dabotsonline, ssgbryan and 2 others

What I found the most interesting is the way CF describes the various OS's. In reality, Apple only has 2 OS's

Federighi then breaks them down into "experiences", so

iOS, one OS divided into four different experiences
That actually provides a great deal of clarity to a question a lot of us have.
Reactions: TheSkywalker77, mudflap, eyeCloudGuy and 12 others
L

radio893fm said:
This arrogant attitude is what turns off so many people to the point that they don't even want to touch such many great Apple products.
Click to expand...

I think he is funny. Much better presenter than Fill or Tim. Fill is just a speck lister, and Tim tries to be all hip and cool, when he is really not. But this guy is just natural. He really reminds me of Scott Forstall from back in the day. Both are funny, both are a little arrogant, but both are still likable
Reactions: Yvan256, rbrian, leem123 and 25 others