During the Q&A session following Steve Jobs' pitch for a stunning new Apple campus to the Cupertino City Council, Councilwoman Kris Wong asked Jobs if the city of Cupertino would get "free Wi-Fi or something like that" in exchange for green-lighting the building project.

Jobs felt that free municipal Wi-Fi was something the city was better equipped to provide and that Apple paid plenty in property tax and if Apple "can get out of paying taxes, we would be glad to provide free Wi-Fi." The exchange drew a laugh from the audience, but an indignant Twitteronia was not pleased.
<p style="text-align: center;"> 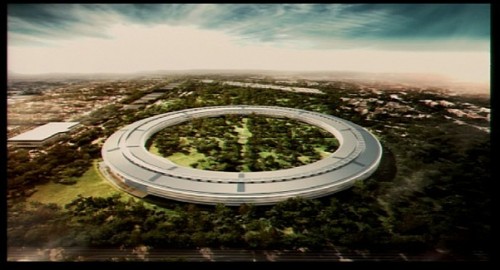 </p>
It's kind of peculiar that the request -- which was obviously not a sticking point for the Council -- drew such fire from observers. Local governments are perennially broke and routinely extort capital improvements from businesses seeking to do business in their community. "If you build that big office park, you need to buy us new fire truck to cover the area adequately." It happens all the time, just most City Council meetings don't get nearly one million views on YouTube.

In addressing the controversy, Business Insider contributor Jay Bhatti took the opportunity to engage in some actual journalism and emailed the councilwoman to get the background on her question. An excerpt:

My question about how residents can benefit from the new campus was primarily meant to be a softball question for Steve to talk more about Apple's long-term relationship with Cupertino and its residents. I was hoping he would talk not only about the fact that they are the city's largest tax payer, but also that Apple reciprocally enjoys calling Cupertino its home, as our city attracts phenomenally talented individuals and families with our vibrant and diverse community, safe neighborhoods, top-notch education districts, and extremely supportive business environment (as evidenced by numerous other tech companies that call Cupertino their home). Believe me, I know how much our residents benefit from having a $300B company in their backyard, but I was hoping to draw out more dialogue on Cupertino and Apple's mutually beneficial relationship.

Steve, in his answer, joked about moving up to Mountain View - Google's hometown where they provide the residents there with free wifi. For some background context, I've joked with Steve in previous conversations (unrelated to Apple's new campus) about Apple doing the same for Cupertino. So, my follow-up was admittedly a flat attempt at going along with the same joke, and Steve replied the same way he did previously to me, which was he believes the city should provide those services. It was intended to be a joke and nothing more.

English is my third language, so I can tell from watching the clip again how viewers might have misunderstood what I said.
Click to expand...

Like any elected official who cares about their city, Councilwoman Wong just wanted Steve to say nice things about Cupertino, and was joking around with Cupertino's biggest local success story. Nothing wrong with that.

The Cupertino City Council doesn't seem too worried about the Wi-Fi either: Cupertino Mayor Gilbert Wong told reporters Wednesday "there is no chance we are saying no" to the new Apple campus.

Article Link: Cupertino Councilwoman Asking Apple For Free Wi-Fi Was An Inside Joke

As a resident of California, I demand an inquiry!

It's bad when you need to explain your own "jokes". Sorry, but that whole council seems obtuse as a brick.
A

The problem is that the councilwoman doesn't know her place. Jobs has done more for Cupertino than she'll ever hope to do in 20 lifetimes. These local governments wouldn't be in financial difficulties if they'd just spend the inordinate amount of tax dollars already given to them properly.

Did you even read the article?

She was making a joke. Calm down.
J

Darth.Titan said:
Did you even read the article?

She was making a joke. Calm down.
Click to expand...

Did you even read his screenname?

jared52 said:
Did you even read his screenname?
Click to expand...


Since people think that Apple is religion/cult-like, shouldn't they be tax exempt like churches?
J

To be fair, it is her place to interview Mr Jobs, and expect him to follow the same rules and regulations as all other applicants. It's unfortunate for her that Steve Jobs has such a following that the whole meeting would be watched round the world by so many people. There was a lot of dry humour in there on both sides... I found it quite abrupt of Steve to make those comments about moving to Mountain View, but then none of us realised the back story until now.

You can't give someone special treatment just because of who they are, otherwise it sends out the message that the person is in control of the council. The council people made some quite cringeworthy comments, but they were just doing their jobs. No harm done, Jobs is gonna get his land.
T

Did you even read the article?

She was making a joke. Calm down.
Click to expand...

jared52 said:
Did you even read his screenname?
Click to expand...

Sorry Jared and Darth, but Angry is right. She should have left inside jokes for personal conversation. We are talking about the worlds second largest company behind Exxon and Apple is pretty close to being #1, so to even hint at making a request for free wifi, even if it was joke, should have never been said in a public counsil meeting. Possibly one of the worlds most powerful and intellegent business man is asking if he can continue to give the city more money in taxes, building permits, etc and your asking for free wifi. Really? Someone did not goto business school. She might as well have asked jobs why he looks so thin and frail.
D

Dr Kevorkian94 said:
screw the free wi-fi that would be an amazing public park
Click to expand...

I like that idea! Unfortunately, its probably less likely than free wifi knowing Apple...

The original MacRumors article didn't clearly convey the tone of that exchange. I did, however, watch the video they linked to about Job's presentation, and while it wasn't initially clear that she was joking, if you continued to watch you could tell that she wasn't serious. Probably would have been more clear if Steve thought that inside joke was really funny
M

Honestly I don't see any problem with her asking that, joke or not. Why not give it a shot?

Would people have been offended if she had asked and Jobs replied, "Hey, that's a great idea, sure!"
I

Is Cupertino that great of a place to live?

Why is this story in the iOS blog?
T

I call BS. This woman realized she looked like a complete idiot bureaucrat in front of millions of YouTube viewers and is now walking this back as a joke. Steve didn't look like he was in on the joke. And she is also hiding behind language barrier as an excuse.

Steve was gracious enough to make an appearance at the useless little council meeting to explain Apple's plans. He did not have to be there, and they took it as an opportunity for celebrity. Stupid. No wonder governments are broke.

Are you saying there are people on the internet that are over-reacting based on little to no information? You obviously are not well informed and should quit your job! How could you say that?!


rdowns said:
Why is this story in the iOS blog?
Click to expand...

Because Macrumors never covers mac stories anymore and I want a cookie.
T

It wasn't a joke... Apple are doing the free WiFi!!

rdowns said:
Why is this story in the iOS blog?
Click to expand...

That was my question exactly!

good things come to those who ask. even it its just a joke remember that kids

rdowns said:
Why is this story in the iOS blog?
Click to expand...

OK, I clicked the wrong button.

Dr Kevorkian94 said:
screw the free wi-fi that would be an amazing public park
Click to expand...