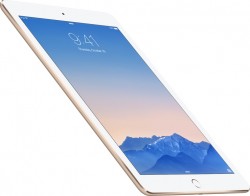 Taiwanese touch panel makers General Interface Solution and TPK will share production of a third-generation "4K" iPad Air set to debut in March, according to sources out of the China supply chain (via DigiTimes).

The same sources claim that in addition to a 4K resolution touch panel, Apple's new 9.7-inch tablet will feature up to 4GB RAM and improved battery life, and is scheduled to enter mass production in the second quarter of 2016.

The report goes on to state that both display makers expect a slight on-year increase in demand for touch panel products from Apple in the first half of 2016 due to orders of products equipped with 3D Touch. This comes despite previous rumors suggesting the iPad Air 3 will not adopt the pressure-sensitive display technology due to the production difficulties involved with scaling it up for a larger display.

Taiwan-based website DigiTimes has a mixed track record at reporting on Apple's upcoming product plans, but its sources within the upstream supply chain have proven reliable in the past. However, the term "4K" may simply refer to the new iPad Air adopting features included in the iPad Pro, which inherited the oxide thin film transistor from the 5K Retina iMac, along with a UV-based photo alignment technique that ensures uniform color and brightness in the display. It also included a variable refresh rate that preserves battery life by cutting the refresh rate in half whenever there's static content on the screen.

Based on details from leaked design drawings, the next-generation iPad Air may be set to adopt the iPad Pro's four-speaker design and gain an LED flash next to the rear-facing camera. Other updates that would make sense include a faster A9 or A9X processor, Smart Connector, and improved cameras.

Article Link: DigiTimes Says iPad Air 3 Will Have 4K Display and Up to 4GB RAM

The only actual logic in that comment is that it won't contain more than 4GB. Which I think we could all confidently predict! ;-)
Reactions: yegon, thermodynamic, disinfectant and 17 others
Comment
S

If it supports the Apple Pencil I will definitely be buying this.
Reactions: Uofmtiger, demodave, kupkakez and 12 others
Comment
J

This is why I love Apple!!!! Will buy day 1!
Reactions: T Coma and Vanilla35
Comment

So the Air is going to get 4K support before the Pro? And the iPad is going to have top of the line display before iPhone? Call me very skeptical.
Reactions: VTECaddict, xxray, disinfectant and 37 others
Comment
S

Why would the Air have a higher resolution screen than the Pro? Also isnt 4K a 16:9 resolution? How would that play out on the iPad?
Reactions: Dave Walker, macaximx, Jamalien and 4 others
Comment
B

No to the 4k screen. it's an iPad Air with iPad pro features. To be expected. I'm sure both this and next iPhone will support Apple pencil because they want to sell more of them.

So the iPad border of play now is:

maybe Apple can't do 4K on where it would have mattered on the larger iPad Pro ? Or perhaps Apple will do it to the Air first, then to the iPad Pro...later on

although 4K would look better on larger displays, I can't see how good it will look on an smaller size Air.

I would imagine it would be similar to viewing 4K on a 22' TV set. And i doubt 3D touch will be... Either one or the other to compensate to cost.....
Comment
C

A 4k screen would screw up apps. Hardly anyone updates ipad apps as it is. Apple would've gone that direction with the ipad pro if they had any intention.
Reactions: iChrist, jase1125, the-oz-man and 4 others
Comment
R

4K display? Better than the iPad pro? There is no way they'll release something better than the Pro at a lower price.
I think it will have 2GB of RAM and the new A9X at a lower clock, so slightly slower than the pro maybe with the pencil support
Reactions: Glideslope, Dave Walker, guychicago and 4 others
Comment

Cool, improved battery, 4GB RAM and hopefully a smart keyboard are what would be most appealing to me. I've never really seen the need for an iPad, but the idea is growing on me now so I'm hoping the Air3 comes out soon.
Reactions: keifer.street, orbital~debris and centauratlas
Comment

If I owned a IPP and the new iPad Air 3 did actually come with a 4K I'd be extremely annoyed, the IPP should effectively take course of new updates and the rest of the iPad's then follows suit.
Comment

Is this and the other rumour about the speakers are true, I'll be buying it on day one.
Reactions: 12vElectronics, RowellE and orbital~debris
Comment

- Says no one
Reactions: borgqueenx, chrismail627, Trin813 and 16 others
Comment

benedictm said:
No to the 4k screen. it's an iPad Air with iPad pro features. To be expected. I'm sure both this and next iPhone will support Apple pencil because they want to sell more of them.

So the iPad border of play now is:

Yes this makes sense. For me the question mark is if Apple is able to bring 3D Touch to larger screens. I believe there was a rumor they were having engineering challenges getting it to work on iPad displays.
Comment
E

Would absolutely LOVE a 4K display on the iPad Air!
Reactions: borgqueenx and Schubbiii
Comment

I'm so ready for this!
Reactions: orbital~debris
Comment
C

At this pace we are going to have more ram than storage in the future (16 Gb, I'm looking at you!)
Reactions: Jamalien, acidsoul, ike1707 and 2 others
Comment

It'll need the extra RAM to handle that 4k display.

All that means nothing without Apple Pencil support


It will take an year for iPad apps to catch up to support that resolution
iPad Air 2 2GM RAM is plenty fast enough as nothing really taxes it
I highly doubt there is improves battery life with a 4k screen
Reactions: rhinosrcool, johnnyturbouk, brendu and 1 other person
Comment

i actually believe this to be true. Apple is very conservative on new models (iPad pro), the iPad is an established product on the market and apple knows they have to spice it up to get people interested again.
Reactions: borgqueenx and orbital~debris
Comment

benedictm said:
No to the 4k screen. it's an iPad Air with iPad pro features. To be expected. I'm sure both this and next iPhone will support Apple pencil because they want to sell more of them.
Click to expand...

Out of curiosity, why would someone want a pencil on the iPhone? I do understand that pencil is useful for certain things like drawing but how many people who buy iPhone's are artists or graphic designers? These who are, more then likely would settle for the iPad pro or some other tablets with pencil.

I still have not come across any thing I can not do using just the finger on the touchscreen! I wouldn't pay even a fiver for the Apple pencil if I have no use for it.
Reactions: the-oz-man, RowellE, Domen151 and 1 other person
Comment
T

Notice the iPad pro had the 4 speakers and now its coming to the small ipad's... Probably not a blow-away feature, but if Apple can do that to speakers, then move then onto others, why can't they do the same with displays ?

I mean the 13' Mac has Retina display, once never thought possible. Who would want Reina on a *smaller* display,, A 15' makes more sense... But we got it.
Comment

The only actual logic in that comment is that it won't contain more than 4GB. Which I think we could all confidently predict! ;-)
Click to expand...

So you're saying it's an excellent prediction that is likely to occur, right?