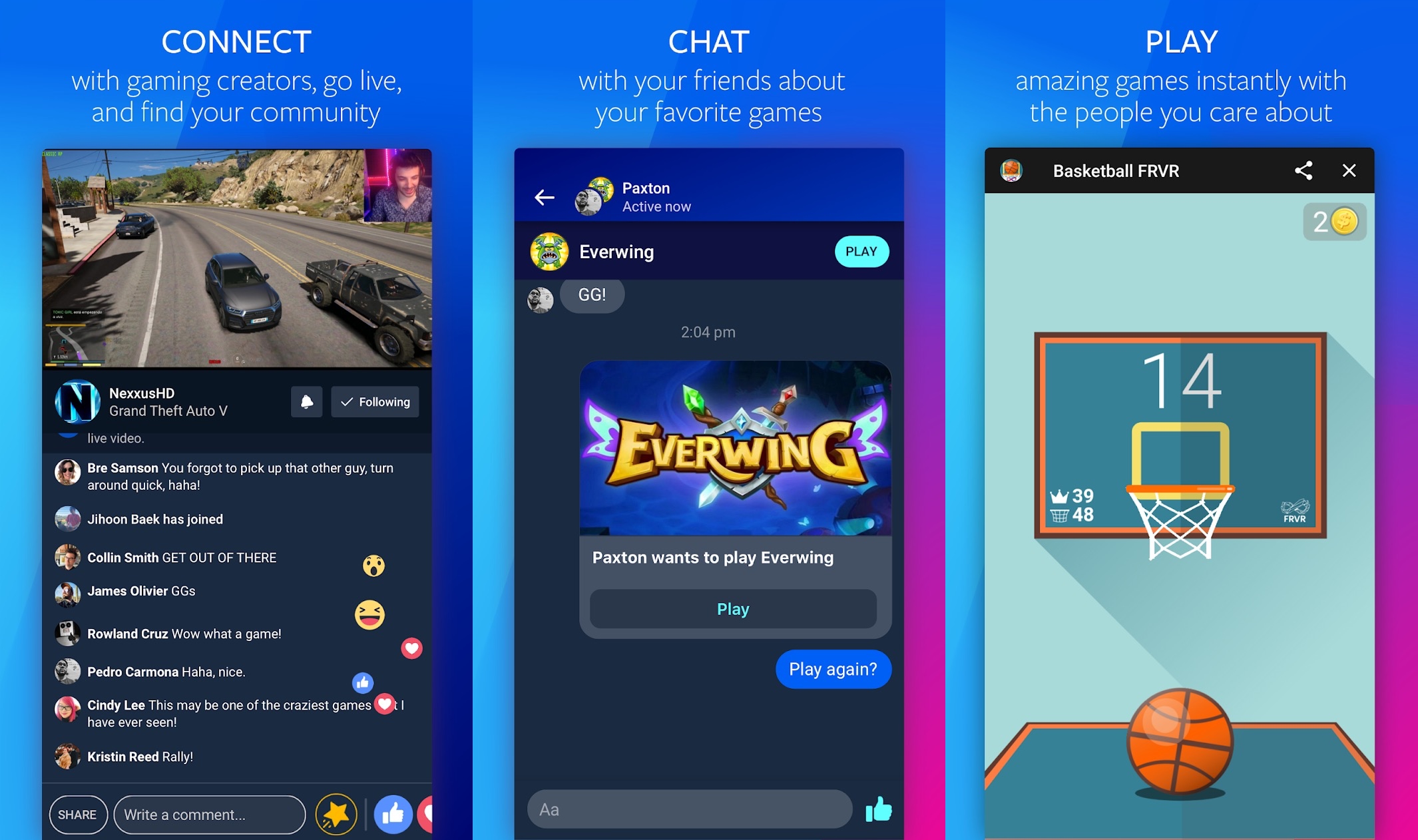 The Facebook Gaming app on Android​
Zuckerberg's comments, which were said to 50,000 Facebook employees over a webcast, were shared by BuzzFeed News. Apple, said Zuckerberg, has a "unique stranglehold as a gatekeeper on what gets on phones."

Facebook has been chafing at Apple's App Store rules after Apple blocked Facebook's gaming app, which launched earlier in August. Apple rejected Facebook Gaming multiple times because Apple does not allow apps that offer alternative stores with content that it cannot vet. Facebook launched the app without gameplay functionality, and it can be used to watch streams of other people playing games, which is its primary purpose.

Apple and Facebook also had another disagreement in August after Apple refused to waive fees for Facebook's paid Online Events feature. The Online Events option in the Facebook app is designed to allow small businesses and individuals to organize paid digital events that Facebook users can sign up for.

Facebook asked Apple to waive its 30 percent fee taken from the in-app purchases for Online Events or let Facebook process event payments with Facebook Pay, but Apple refused because that's a violation of its App Store guidelines.

Since Apple wouldn't waive its fees, Facebook intended to add a note in the Online Events feature that said "Apple takes 30% of this purchase." Apple took offense to the wording and did not allow Facebook to include the wording in the Facebook app. Apple said that the update violated an App Store rule that prevents developers from showing irrelevant information to users.

In addition to disagreements over the App Store, Zuckerberg is unhappy with changes that Apple is making in iOS 14. Facebook on Wednesday said that the anti-ad tracking feature Apple implemented that requires customers to agree to be tracked across apps and websites could cut down on 50 percent of the Audience Network Ad revenue companies earn through Facebook.

Zuckerberg also had thoughts on Apple's ongoing dispute with Epic Games, and said Apple's thwarted attempt to block the Unreal Engine was "just an extremely aggressive move" that was "quite problematic."

Both Apple and Facebook, along with Google and Amazon, are facing a U.S. antitrust investigation. The CEOs from the four companies in July testified in an antitrust hearing with the U.S. House Judiciary Antitrust Subcommittee. The chairman of the subcommittee, David Cicilline, this week said that the four tech companies are "behavior which is deeply disturbing and requires Congress to take action."

**** Zuckerberg. You're just pissed because you can't exploit people's personal info and sell it to the highest bidder. I have no empathy for Facebook and their shady practices.
Reactions: ONEGRUMPYOLDMAN, mburkhard, Brandhouse and 143 others

Oh why don't we have all the billionaires that were in front of congress during that antitrust investigation come out and start pointing fingers at Apple.
Last edited: Aug 28, 2020
Reactions: AdonisSMU, tridley68, BaltimoreMediaBlog and 18 others
T

That is rich Mark... after the statements / back and forth revealed during the congressional hearings on your Instagram buyout. I think feedback on these types of things is valuable, but I don't want to hear it from someone like Mark Zuckerberg...
Reactions: FriendlyMackle, Morgenland, AdonisSMU and 29 others
J

I think it’s outrageous that Apple wouldn’t waive the 30% fee for Online Events, since they’re just taking that money from struggling small businesses. That being said, Zuckerberg criticizing literally any company for anything is beyond laughable. Facebook is the most immoral, greedy, invasive, petulant, criminal company in tech, and it all comes from the guy at the top.
Reactions: ONEGRUMPYOLDMAN, dazzlingirl, Morgenland and 44 others

Zook's concern is laughable given the way FB operates.
Reactions: FriendlyMackle, Morgenland, AdonisSMU and 32 others
D

One bad guy blaming the other bad guy to not look so bad. Please wait in line ?
Reactions: ptsube, iGeek2019, ohmydays and 9 others

I gather he wants to go back to the wild west days where every App was unaccountably pulling some shady nonsense.
Reactions: FriendlyMackle, AdonisSMU, Arbuthnott and 15 others
N

Queer how it's that it's the multi billion (or trillion) dollar mega corporations that are going at it like rabid dogs over a few percentage points. We Want More Money.
Reactions: FriendlyMackle, SqlInjection, femike and 5 others

Yeah because selling my phone and browsing information is really innovating. /s
Reactions: FriendlyMackle, Morgenland, AdonisSMU and 30 others

Nice, nice, not a fan of Facebook, but the enemy of my enemy is my friend.
And later we clash Facebook...

All this new tech companies needs regulations
Reactions: Sandstorm, Morgenland, techfreak23 and 12 others
A

If Apple where a bricks and mortar department store, who decided no to stock any Zuckerberg products- would we be having this argument?

My store, my rules. You don't pay rent, but we take a percentage of your returns as remuneration.
Reactions: 123, Sandstorm, Brandhouse and 33 others

Man this is heading in the direction where Apple will be forced to open iOS to app installations from other sources than App Store, reminds me of the whole internet explorer thing in the 90's.
Last edited: Aug 28, 2020
Reactions: iGeek2019, t1meless1nf1n1t, diandi and 13 others
I

Yeah man- that App Store- it stifles competition. It did not invent and create an entire new industry leading to multiple millionaires and billionaires... oh no, no it stifled innovation. Man I hate Zuckerberg.
Reactions: ConfusedChris, Brandhouse, dazzlingirl and 50 others
T

So BookFace is unhappy about iOS privacy protections. That makes me happy.
Reactions: Brandhouse, FriendlyMackle, Spizike9 and 30 others
H

Maybe Apple should block the FB app all together because it spies on people, waists their time, is primarily used to spread unfounded conspiracy theories and drains their phone batteries because it does everything to keep running in the background?
Reactions: pete480, Brandhouse, dazzlingirl and 28 others

more like. Apple blocks our app's spying too much... so we hate them. also...

omenatarhuri said:
Man this is heading a direction were Apple will be forced to open iOS to app installations from other sources than App Store
Click to expand...

yep, freedom to install is a right. if you spend $1k on a phone or iPad. ought you not be able to install software you choose to? without an Apple Pay wall? many say "HELL YES!"
Reactions: theConundrumm, techfreak23, t1meless1nf1n1t and 12 others

groove-agent said:
**** Zuckerberg. You're just pissed because you can't exploit people's personal info and sell it to the highest bidder. I have no empathy for Facebook and their shady practices.
Click to expand...

Stop browsing FB and you won't see ads from FB.
Reactions: theConundrumm, firedept, femike and 4 others
I

omenatarhuri said:
Man this is heading a direction were Apple will be forced to open iOS to app installations from other sources than App Store
Click to expand...

No it's not. They want you to think hat they are steering the discussion but they are not. This is propaganda, and the closed architecture is an actual benefit of the Apple ecosystem. Don't worry- their argument is that there are other markets they can exploit and control, and the App Store was created by Apple, and it has always been this way. They did not change the rules to profit from their ecosystem- their ecosystem was created with these rules and it flourishes.
Reactions: theConundrumm, patrick.a, bt22 and 11 others

Really don’t understand how the EU is so quiet on this. They r usually really picky with these kind of things
Reactions: AdonisSMU, BaltimoreMediaBlog, N’Zoth and 1 other person
I

mdntcallr said:
more like. Apple blocks our app's spying too much... so we hate them. also...

yep, freedom to install is a right. if you spend $1k on a phone or iPad. ought you not be able to install software you choose to? without an Apple Pay wall? many say "HELL YES!"
Click to expand...

It's not a "right." It is like complaining that the car you drive does not take diesel and you want the courts to force the maker to install a Diesel engine instead fo what you bought it with.
Reactions: Brandhouse, theConundrumm, Arbuthnott and 13 others

Facebook charges monopoly rents to use their platform, only the payments aren't in cold hard cash but personal information that they can and will exploit/misuse.
Reactions: AdonisSMU, patrick.a, Arbuthnott and 11 others
M