Facebook's new privacy-focused platform, which will see its core apps overhauled, will, according to Facebook, be built around principles that include private interactions, end-to-end encryption, ephemeral messages, safety, interoperability, and secure data storage.

Zuckerberg says that its services will be rebuilt "around these ideas" over the course of the next few years, and that as Facebook implements these changes (to both Facebook and Instagram), the company will be "taking positions on important issues concerning the future of the internet."

These changes will be implemented "openly and collaboratively, and Zuckerberg points out that many people likely won't believe Facebook is able to build such a privacy-focused platform.

I understand that many people don't think Facebook can or would even want to build this kind of privacy-focused platform - because frankly we don't currently have a strong reputation for building privacy protective services, and we've historically focused on tools for more open sharing. But we've repeatedly shown that we can evolve to build the services that people really want, including in private messaging and stories.
Click to expand...

The rest of Zuckerberg's article goes into more detail about each of the core principles that Facebook will be building its social networks around. For Messenger and WhatsApp, Facebook will focus on making them "faster simpler, more private and more secure" with end-to-end encryption. Additional ways to "interact privately" with friends, groups, and businesses will be added to make interacting with friends and family "a fundamentally more private experience."

When implementing end-to-end encryption on its platforms, Facebook plans to improve its ability to identify and stop bad actors using patterns of activity to appease law enforcement agencies that will be upset with Facebook's planned encryption efforts.

We've started working on these safety systems building on the work we've done in WhatsApp, and we'll discuss them with experts through 2019 and beyond before fully implementing end-to-end encryption. As we learn more from those experts, we'll finalize how to roll out these systems.
Click to expand...

Zuckerberg says that the company is working on ways to make messages more ephemeral, perhaps by deleting them after a month or a year by default, and as for interoperability, Facebook is going to make it possible for users to "send messages to your contacts using any of our services," something that will later be expanded to SMS interoperability.

Facebook says that much of its work is "in the early stages" and that it is committed to consulting with experts, advocates, industry partners, and governments to "get these decisions right."

Facebook is a joke and yet another company tries to copy Apple.

Good on him! I'm reminded of the village wolf outlining its vision for a safety-focussed field for sheep to graze. Dunno why I thought of that, but still, good on him! 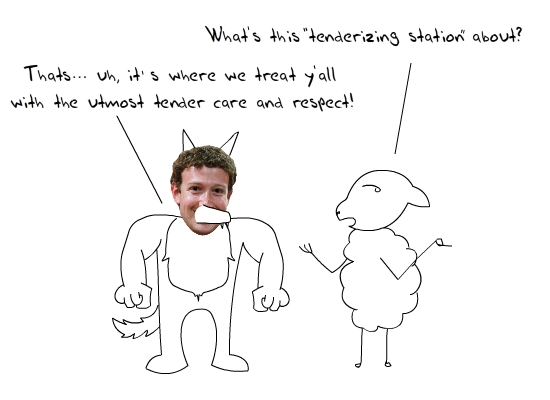 I'll believe it when I see it.


You will have to ask people for some kind of subscription to support your business, else you are not gonna survive.
Reactions: ex0dus1985, philosoraptor1 and brendu

Fox guarding the chicken coop.
Reactions: philosoraptor1, Vanilla35, u+ive and 20 others
A

Oh this thread is gonna be so fun *grabs popcorn*
Reactions: lilrush, LizKat, Solomani and 4 others

More power to him, if he can do it. I won't hold my breath, but I hope it results in changes for the better.
Reactions: diego

FaceBook and Privacy just do not belong in the same sentence.
Reactions: chilly willy, w1z, philosoraptor1 and 27 others

StellarVixen said:
I'll believe it when I see it.


You will have to ask people for some kind of subscription to support your business, else you are not gonna survive.
Click to expand...

The broad outline of this definitely sounds better than the current Facebook, but I'm skeptical this will ever exist. Also, you're right with that concern, how would they make money? I sure as hell would not pay Facebook money.

Facebook will promise privacy just to retain as many products for their advertisers as possible now that the products are beginning get mad.
Reactions: philosoraptor1, Breaking Good, haruhiko and 5 others

This feels like too little too late. I still have an account but barely use it. Social media in general seems more bad than good in my opinion but overall FB, IG, and Twitter aren't going away anytime soon.

Let's at least be hopeful this will be a step in the right direction but really if you take part in social media you're already giving up a level of privacy. If you really want privacy don't willing join social media services at all.
Reactions: MacsRgr8

Zuckerberg must have read and inspired by Hitler's book, Human Rights.
Reactions: gdbleb, stevekr, lilrush and 5 others

Baymowe335 said:
Facebook is a joke and yet another company tries to copy Apple.

Copying Apple? Apple has a social media app/function now? If they ever do Apple would be the copy cat.

No thanks, Mark. Won't be interested.
Reactions: philosoraptor1, Xade, tw1ll and 5 others

I actually laughed out loud reading that headline.
Reactions: philosoraptor1, Vanilla35, u+ive and 16 others

I actually laughed out loud. For this to happen, users must trust you. No one trusts Facebook.
Reactions: philosoraptor1, u+ive, borntrouble and 10 others

JGIGS said:
Copying Apple? Apple has a social media app/function now? If they ever do Apple would be the copy cat.
Click to expand...

I love it when these side projects for Apple crash and burn because it should serve as a reminder to focus their computers. Too bad they don't.
Reactions: heffsf, stevekr, WatchFromAfar and 2 others
B

JGIGS said:
Copying Apple? Apple has a social media app/function now? If they ever do Apple would be the copy cat.
Click to expand...

Try to keep up. Copying Apple's (working) stance on privacy. FB has realized people are leaving its site bc they sell your data and track your every move.

NOW they are concerned about privacy?
Reactions: philosoraptor1, geenosr, imnotthewalrus and 6 others

Like reading an article from someone who weighs 700lbs that outlines the best practices for weight loss.
Reactions: philosoraptor1, canadianreader, Verita and 5 others
J

Tim Cook started it, this is what's gonna happen this year next would be Google then NSA.
Reactions: w1z, macdisciple, diego and 1 other person