It's certainly not the first time fake photos alleged to be parts from upcoming Apple products have surfaced, but a particularly egregious case occurring today is starting to be picked up by other sites, so we thought it would be a good idea to nip this one in the bud.

Earlier today, we received a tip about a site sharing photos of what was said to be the iPhone 5S logic board with an A7 chip on it, along with purported specs about this chip.

Among the posted photos is a full shot of the logic board, which seems to be 100% identical to the iPhone 5 logic board with the exception of an A7 chip. While there is a decent chance that the iPhone 5 and 5S will have very similar logic boards, there will undoubtedly be some changes and the essentially identical appearance immediately flagged the iPhone 5S photo as a certain fake. 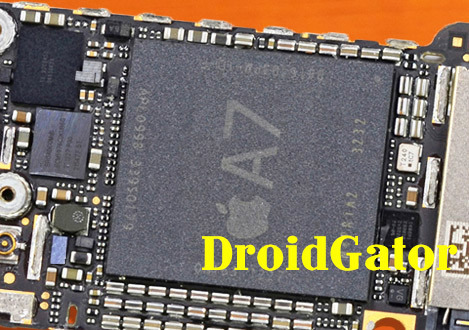 Original faked closeup of A7 chip: Notice "3232" date code at right and faint "1227" date code at bottom.​
As if that evidence were not enough, the post provides additional information in the form of a closeup of the A7 chip, showing off unique part numbers and other codes not seen on the A6 chip in the iPhone 5. These codes also immediately gave away the photo as a fake, and we replied to our email tipster to point out the issue.

It's a fake. The numbers shown on that A7 chip are inconsistent and in some cases nonsensical. For example, there is a "3232" along the right side of the chip. This number should be a code noting the two-digit year and two-digit week of manufacture. Since we're not currently in the year 2032, this code is clearly fake.

In a similar vein, there is another faint manufacture date code along the bottom side of the chip for a different component within the chip. This one they failed to Photoshop, so it shows a "1227" code indicating that it was made in mid-2012 as was the case for the A6 in some early iPhone 5 devices.
Click to expand...

We suspect our tipster was associated with the fake photos, as the closeup image was quickly replaced with a new one changing the "3232" to a more sensical "1302" corresponding to the second week of January 2013. The site's watermark on the image was also moved to obscure the second "1227" date code. 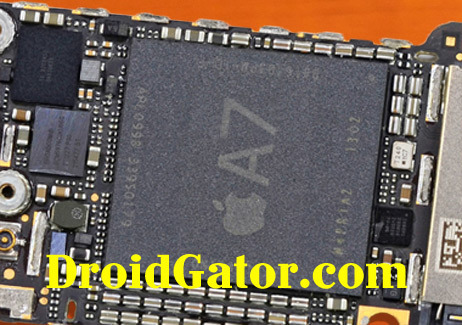 Replacement faked closeup of A7 chip: Notice new "1302" date code right and watermark moved to obscure code at bottom.​
We had hesitated to post about these fake photos, but with at least half a dozen other sites having already picked up on the story with varying levels of skepticism, we thought it most important to set the record straight.

Article Link: Faked Photo of 'iPhone 5S Logic Board' With A7 Chip Making the Rounds

This gave me some interesting insight into what those numbers actually mean. Thanks for setting things straight!
S

Who has time to waste on doctoring a photo? Why? "Fortune and glory"??

Forgot the pictures, more interested in what the analysts are saying! Where you at Kuo?

syavno said:
Who has time to waste on doctoring a photo? Why? "Fortune and glory"??
Click to expand...

I just think it is cool the tipster clarified for you quite nicely it is an actual fake with no doubt.

Too dumb and lazy to fake photos right. Children...
K

I wish you had posted their "fake" specs. I was curious, I didn't want to give them a page view but on the other hand I wanted to see what crap they made up.

Moral of the story...

...half-hearted attempt(s) to fool a bunch of nerds who vehemently study and know every millimeter of electronics' components are futile!

syavno said:
Who has time to waste on doctoring a photo? Why? "Fortune and glory"??
Click to expand...

apparently, "Droid Gator" has time to waste on this kind of nonsense, which is still surprising because it takes away valuable time from dicking around on the homescreen and playing with widgets.

Typical of websites that start with Dro... Never mind.

hahaha, an Android website can only get hits if it had Apple news

Since we're not currently in the year 2032, this code is clearly fake.
Click to expand...

Anything for page hits and back links I guess.

Good to see MR on the ball as normal!

No need to tell the faker the correct numbers to use.

It's not like an A7 processor would be groundbreaking news anyways. It's pretty much the predicted next level up. This shouldn't even be on the front page.

Post away and let 'em know what you think of them! http://www.facebook.com/droidgator

"Egregious". Why do I find that word strangely sexy?

When MacRumors posts a story (on the front page) debunking a false claim, they are doing a public service as well as a service to their collegues. This is journalism at its finest.

And they didn't out their source! The source provided enough crumbs for the greatest of simpletons.

testcard said:
"Egregious". Why do I find that word strangely sexy?
Click to expand...

You find the word "egregious" sexy, do you?

Would you like to tell me more about that?