First Details on iPhone 7 Design: Flush Rear Camera, No Antenna Bands Across the Back

Apple's iPhone 7 isn't expected to launch until the usual September timeframe, but we're starting to get our first hints of what we might be able to expect for the new device. According to a source who has provided reliable information in the past, the iPhone 7 body will appear very similar to the design used for the iPhone 6 and 6s, with two significant exceptions.

The first involves the rear camera, which protrudes slightly on the iPhone 6 and 6s. On the iPhone 7, the camera is said to sit flush with the rear casing, enabled by a thinner camera module. Recent rumors have indicated Apple is considering equipping the iPhone 7 Plus with a dual-lens rear camera, but the smaller iPhone 7 is expected to include a more traditional camera. 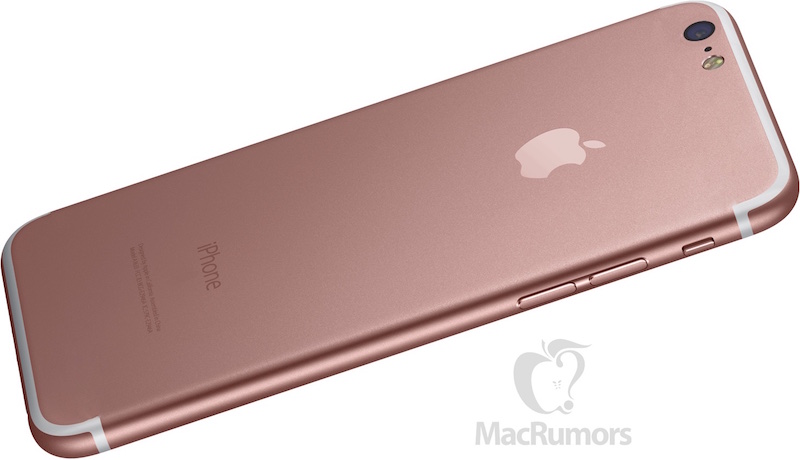 Our source has been unable to confirm whether the device as a whole will be thinner than the iPhone 6 and 6s, although any thickness reductions would be expected to be slight, and many users (particularly those who use their devices without cases) will likely find the flush rear camera to be a significant improvement even if other dimensions remain the same.

Article Link: First Details on iPhone 7 Design: Flush Rear Camera, No Antenna Bands Across the Back

I would like to see straight edges like the 5S.
Reactions: SCARY GAY DAD, Gameboy70, dmj102 and 48 others

No redesign? But but but, I want everybody to know I have the new iPhone...
Reactions: Rekan_, Ladyc0524, AleXXXa and 49 others

Why did the render in the article remove just two of the antenna lines, and not all of them?

EDIT: Yes, I see the rumor says the side and top lines will remain. Still, why not make a mockup without the lines at all?
Last edited: Feb 2, 2016
Reactions: jblagden, sshambles, Weaselboy and 1 other person
E

The photoshop work on this isn't too great =/

But the flush camera sounds awesome.
Reactions: AleXXXa, mrxak, alexandr and 12 others

oneMadRssn said:
Why did the render in the article remove just two of the antenna lines, and not all of them?
Click to expand...

The other significant change with the body of the iPhone 7 is the removal of antenna bands across the rear, allowing for a cleaner all-metal look on the back. Antenna bands at the sides and around the top and bottom edges are said to remain, however.
Reactions: Adithya007, Lesser Evets, attila and 13 others
M

They should have optical image stabilization on all models. It's such a dramatic improvement in image quality over non-OIS or EIS.

I doubt they'll get the 3-4 stops of image quality improvements with dual-sensors.
Reactions: mrxak, Adithya007, Darrensk8 and 8 others

Moving the antenna wires to make way for wireless charging at a distance!

Ha, I crack myself up!
Reactions: AleXXXa, darkknight14, amro and 2 others

Does the protruding camera really bother that many people? I mean I guess I'm not bothered by it because my phone is always in a case, but still

mozumder said:
They should have optical image stabilization on all models. It's such a dramatic improvement in image quality over non-OIS or EIS.

I doubt they'll get the 3-4 stops of image quality improvements with dual-sensors.
Click to expand...

Really?, Ive seen lots of side by side pics and I see no evidence to support this.

I am just hoping that the 7 and 7+ don't have different camera/other components. I really love the size of my 6s, have been wanting the 6s+ for the image stabilization. I don't want to have to choose the bigger phone to get all the premium features.
Bigger is not always better! (that coming form a Texan)
Reactions: ron7624, tripmusic, Lopov Jack and 10 others

If they still offer the IPhone in the salmon color like the mockup, they should make the band lines look like marbling. Like a nice slice of fresh fish.
Reactions: Bite this, Sixcranker, AleXXXa and 7 others
L

This makes my 6S Plus seem outdated. What will the 7 retail for?
V

I want design that is different to the iPhone 6(s).
Not the same iPhone with a flush camera and without the antenna lines, and perhaps slightly smaller bezels.
We want a redesigned iPhone 7 that we all hate when the first pictures leak and we like when it is eventually released.
I did...
I want such an experience on the new iPhone 7. I don' t want a 6ss.
Reactions: koigirl, S G, Lopov Jack and 11 others

Hexiii said:
No redesign? But but but, I want everybody to know I have the new iPhone...
Click to expand...

Which is why this is likely fake.

I use my phone naked, and I never once have thought, "damn that protruding lens"!
Reactions: blakethebeast10, Bare, Vanilla35 and 1 other person

Looks great. Flush camera will be a nice change.
Reactions: Narg, Spendlove, ATC and 1 other person

mattopotamus said:
Which is why this is likely fake.
Click to expand...

Of course this is just a mockup....
Reactions: mrxak, AirunJae, Sea Bass and 3 others

justperry said:
And this was said (probably) by a non native speaker!
Says enough.
Click to expand...

That I can read English better than native speaker?
Reactions: Max(IT), Gudi, orbital~debris and 3 others
S

No. NO. NOOO. NOOOO. Curved edges are the only way to do.


oneMadRssn said:
Why did the render in the article remove just two of the antenna lines, and not all of them?
Click to expand...

People would rather spout out and embarrass themselves than actually read the article. Shame.