I love my iDevices but to be honest I don't use Siri on those devices but I would definitely would like to start using it while driving my Ford Focus car for e.g. music, podcasts, navigation and phonecall/receive which I'm getting soon and which probably has CarPlay support as well. I did read and watched some videos about CarPlay and it is still version 0.1 when I see it but still I would like to see and try it in my own car if available.

I'm buying a second hand 2012 model in Europe (the Netherlands) but it seems to have the Sony system onboard but I'm not sure which software version is currently installed and if it supports it. On Fords own website I'm only getting that only 2016 and 2017 models get the full Apple CarPlay support but doesn't this also have to do which version of Sync is running on your device? Can you say that if your devices can or is able to run Ford's Sync 3 and/or a certain version of MyFord Touch that you can run Apple CarPlay on it?

Unfortunately the (non-Ford) garage which is selling the car couldn't tell me the exact type and I'm also not in the region to just go over to them and check for myself. They are still working on the car because the buttons on the front panel weren't responding as they should so they have ordered now a new frontpanel for that.

By looking around on the internet I think this is probably a Sony system and not the basic Ford one. The screen is touch screen ofcourse and I think it's 8inch. It looks a lot like this video of a Focus with a Sony system build into it and that has MyFord Touch on it (but they do mention that it was US only at that time). I've also seen the existing software when we had a short drive it a week ago and it also looked a lot like this video and also the whole audio setup and buttons looks alike with that app layout but that isn't Apple CarPlay but some third party Navimex Multimedya) one.

Any info is appreciated.

Here is a screenshot from my soon to be Ford Focus '12 model: 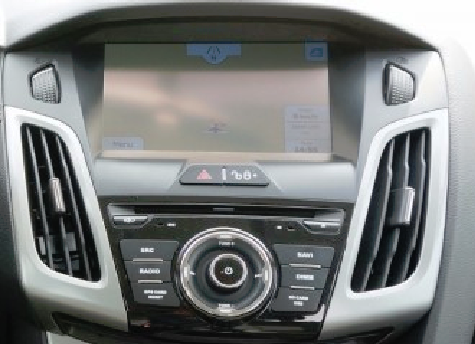 Navimex Multimedya screenshot Ford Focus 2012-2014 from YouTube video so does this mean my system does support Apple CarPlay or do you need additional software installation or hardware changes to get this? Here is also a link to their page for this called "Navimex Ford Focus Nav-9912''. Is this a rip-off of CarPlay or is this actually CarPlay? 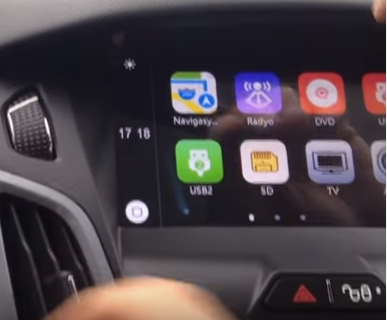 The Ford / Sony? car system they are using (see screenshot below again from that video) looks exactly the same as the system in my Focus '12 one. 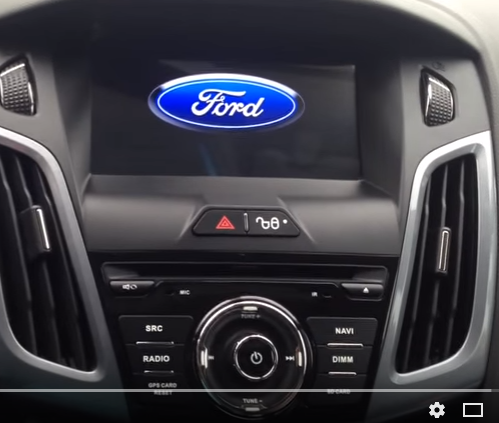 Can you remote start the engine with your phone? If you can,it supports CarPlay. Just that it looks similar to the phone screen does not mean it support CarPlay.

Ford did not start supporting CarPlay until it switched to using Sync 3 starting in most 2016 models. So the answer is no, you have Sync 2. In order to use the Navimex system you must buy and swap out your infotainment system. Hardware, programing and install would probably cost between $1000 to $2000 to upgrade.
Reactions: D.T.

Thank you for the response on my question.
I do wonder now though because I really think I saw on my Ford Focus app icons as in the Navimex system so I really wonder if the previous didn't already swap their original infotainment system but as @Stefan johansson mentioned this is probably not CarPlay then what I saw on my soon to be Ford Focus from '12. I don't think I could start my car via my phone it's pretty cool that this is now possible was a 'standard' car such as the Focus or are you joking?

I've also noticed this Navimex system is around 999 Turkish Lire (282 dollar) when I see this type of Navimex system on Turkish Amazon/eBay kind of websites e.g here, here and here. The costs you are mentioning @Julien is probably if I would switch from official Sync2 to Sync 3 via Ford itself? The Navimex system seems way cheaper.
Last edited: Aug 7, 2017

pacorob said:
..... I don't think I could start my car via my phone it's pretty cool that this is now possible was a 'standard' car such as the Focus or are you joking?

I've also noticed this Navimex system is around 999 Turkish Lire (282 dollar) when I see this type of Navimex system on Turkish Amazon/eBay kind of websites e.g here, here and here. The costs you are mentioning @Julien is probably if I would switch from official Sync2 to Sync 3 via Ford itself? The Navimex system seems way cheaper.
Click to expand...

A remote start feature doesn't have any relation to CarPlay. That is like saying if your car has Auto Headlights it has CarPlay. They have nothing to do with each other.

The info you are linking to is NOT for a CarPlay/Android Auto setup. It is for cell phone mirroring. It will just display what is on your cell Phone screen exactly the same on the car system.

Here is a link to a Ford sync 3/CarPlay/Android conversion setup.

Julien said:
A remote start feature doesn't have any relation to CarPlay. That is like saying if your car has Auto Headlights it has CarPlay. They have nothing to do with each other.

The info you are linking to is NOT for a CarPlay/Android Auto setup. It is for cell phone mirroring. It will just display what is on your cell Phone screen exactly the same on the car system.

Here is a link to a Ford sync 3/CarPlay/Android conversion setup.

Thanks for giving more details Julien now I see that the linking I made is only for cell phone mirroring what I don't get though is why you need to remove the frontpanel to do that then for that Navimex phone mirroring but in a way that mirroring is also really nice if that would work with the controls on your steering wheel and if it would show up on full screen so you can at least run 3rd party navigation apps or music apps (aside of the ones which are CarPlay supported) for example and see them on your main 8inch screen. I see to achieve official CarPlay supports you do need to remove Sync2 hardware/software and get it updated to Sync3 which doesn't come cheap and currently doesn't seem to be worth the money I think.

I guess Stefan was kidding then or I misunderstood him. I already found it a bit odd response in this regard.

In screen mirroring you control all apps by using your iPhone just the way you do now. The steering wheel controls and your Ford infotainment controls won't work for iPhone controls. Also you don't get display specific screens and graphics. The car's display just shows what your iPhone shows. If you flip your iPhone to portrait then the car display will flip also. Everything is the same as using your iPhone now, it is just an 'extra' display. It is nothing like CarPlay. Here is a short video of how it works.

Also there reason you have to change the hardware is there is no HDMI or video input on the Ford stock system to connect an iPhone to. You have to buy a modified version that has the video inputs added.

Thanks Julien for your information in regards to what Wireless Mirroring can and can't do.

pacorob said:
Thanks Julien for your information in regards to what Wireless Mirroring can and can't do.
Click to expand...

Just to add the system you are looking at is a wired mirroring. The wireless in the video won't work in your car since it needs to have WiFi. I just posted as an example of the way mirroring works and not to imply you would have wireless. 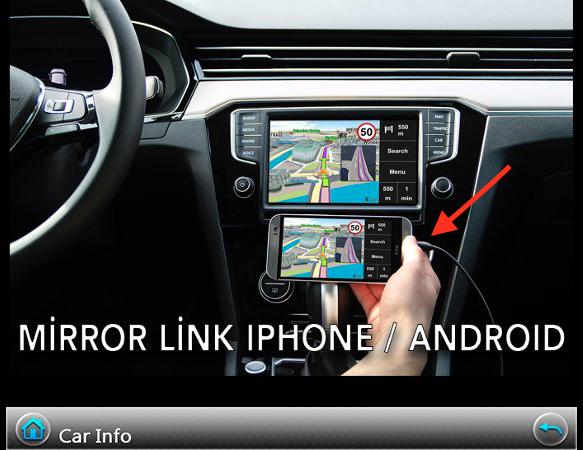 I just want to update here that it seems that in the end when the garage said the navigation and buttons were fixed that the buttons worked but all of a sudden there was a completely new software installed/hardware e.g. new screen however all not original Ford hardware/software but an Android tablet with a special version of 6.0 on it. In the end the navigation didn't even work. I was able to cancel the whole deal because of this because we didn't agree on this. I even drove to the local Ford garage to ask if even in the Netherlands cars of '12 could have Ford + Ford sync/Carplay in them and they told me that it would be possible which such a model.
H

CarPlay via Sync 3 basically sucks. I used it the past 3 months in my 2016 Focus Titanium with 10 speaker Sony system. After a very protracted developmental process, Ford finally released CP for Focus models in April 2017. While I was excited to give it a try, practical functionality quickly changed my exuberance into disdain. I concluded either Ford screwed up the basic GUI function (which would not be a stretch given their brilliant decision to use Microsoft software in earlier sync versions), and/or Carplay is still a work in process, and/or 3rd party developers don't know how to create a functional app (Spotify and NPR are 2 examples). Further, SIRI help is mediocre at best. For example some playlist names are beyond Siri's functionality...hence, "playlist not found" occurs far too often to a basic speech command ). I could go on, but the bottom line...find a reputable 3rd party Carplay unit for your 2012 and go from there.
Last edited: Sep 4, 2017

Thanks for your feedback on CarPlay via Sync3 and that it works horrible.
In the end we now decided to switch to a different car brand and type then the Ford Focus without even having these features because the car we looked for (Honda) is also older '05 and a lot cheaper (8000 euro).
You must log in or register to reply here.
Share:
Facebook Twitter Reddit Email Share Link
Register on MacRumors! This sidebar will go away, and you'll see fewer ads.
Sign Up
Top Bottom