Ford Launching 2017 Escape in May as its First CarPlay Vehicle

As promised, Ford has announced that its new 2017 Escape will be its first vehicle to support CarPlay and Android Auto through its SYNC 3 Connect platform.

The automaker's best-selling SUV has entered production in Louisville, Kentucky, and sales will begin at U.S. and Canadian dealerships in May 2016.

Ford's all-new 2017 Escape hits dealerships in May 2016 (Image: Ford)​
CarPlay will bring Maps, Phone, Messages, Music, Podcasts, and a number of third-party apps, such as Spotify, to the 2017 Escape's in-dash multimedia system.

The Apple software can be controlled with Siri and your vehicle's built-in controls for convenient access to common iPhone features. iPhone 5 or later is required.

The new Escape also features available driver-assist technology that can "help keep drivers in their lane, maintain a set speed and distance on the highway, and even aid drivers in getting out of a tight parking spot."

Ford announced in January that it would be adding CarPlay and Android Auto to all 2017 vehicles in North America equipped with BlackBerry's QNX-based SYNC 3 platform, starting with the new Escape.

CarPlay and Android Auto will also be available in 2016 Ford vehicles with SYNC 3 as an upgrade later this year.

CarPlay and Android Auto will also available in select Chrysler, Dodge, and Jeep models beginning this year. Toyota, meanwhile, remains one of the largest automakers that has yet to adopt CarPlay, instead choosing SmartDeviceLink, despite being listed as a committed partner on Apple's website since 2014.

Article Link: Ford Launching 2017 Escape in May as its First CarPlay Vehicle 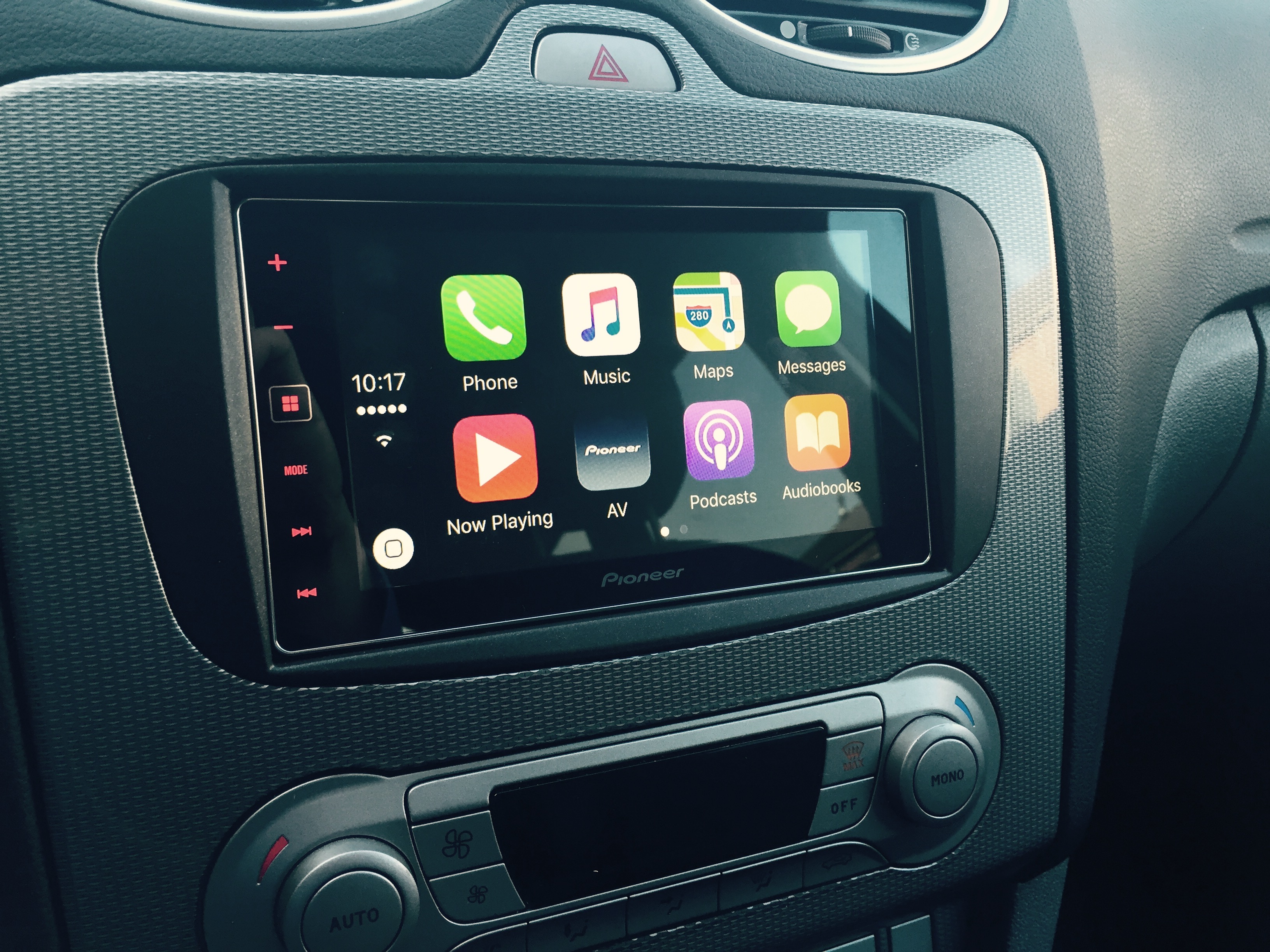 CarPlay yes, Ford, no thanks.
Reactions: KazKam, miamialley, thermodynamic and 5 others

I like the picture at the lake, because it looks like something that could actually happen in real life.
Reactions: KazKam and Big Alsie
D

I really don't get Carplay.

Who want's to be fiddling with buttons, listening to or dictating messages etc whilst driving?

I'd rather just drive, and enjoy some (increasingly rare) gadget free time.
Reactions: nt5672, Wavell, Benjamin Frost and 4 others
S

Who want's to be fiddling with buttons, listening to or dictating messages etc whilst driving?
Click to expand...

Perhaps people that are not you?
Reactions: Lost Rider, iLoveiTunes, Chumburro2U and 7 others
L

Yikes, those bezels.
All it needs is a physical home button to complete the scene.
Makes my retina's burn.
Reactions: miamialley and GrumpyMom
G

Carplay quite frankly, sucks.. It's a half baked solution that doesn't work very well..
Reactions: AFEPPL, WBRacing and Benjamin Frost

MacRumors said:
The new Escape also features available driver-assist technology that can "help keep drivers in their lane, maintain a set speed and distance on the highway, and even aid drivers in getting out of a tight parking spot."


Article Link: Ford Launching 2017 Escape as its First CarPlay Vehicle in May
Click to expand...

I don't see what the big deal is. My dad has had these features with every car he's had since the late 60's. That's when he married my mom.

Ever since, he's had constant assistance with his driving.

"Oh for Crissakes speed it up or we will never get there."

"Bob, watch where you're going! Pay attention! There's a car there!"

"Bob don't park here, there is a spot right next to the door over there!"

Dear old mom! But on the few occasions when my mom is driving and Dad is riding shotgun he's just as bad. And when husband or I are driving, my dad turns into a human GPS.

Seriously though, while these technologies look great, I worry about the stuff I've read about them being hacked. It's hard for me to want to give up my nearly 25 year old car anytime soon when I think of that risk. But as I age I admit this all seems promising in terms of keeping me safely on the road into my golden years.
Reactions: iGreek, Mums, 69Mustang and 6 others
X

They should just wait another year or 8. You never know.

My GMC Canyon has carplay and I do like it but it needs some serious work. One big step forward would be if you could use google maps on carplay instead of apple maps
Reactions: kyleh22 and iAbc21
B

djcerla said:
No carplay, no buy.
Click to expand...

Will be in the market to replace my wife's Pilot this time next year. She doesn't care a bit about it, but I do. While many auto makers have 'plans', the lack of availability so far is frustrating. I hope there's more availability soon.
Reactions: kyleh22 and Jason83

So far the only truly elegant CarPlay integration I've seen comes from Volvo in the new XC90 (and soon S90/V90). The native car UI is so good that you almost don't need CarPlay, but if you want it - it's there as one of the dynamic panels.

Who want's to be fiddling with buttons, listening to or dictating messages etc whilst driving?

I'd rather just drive, and enjoy some (increasingly rare) gadget free time.
Click to expand...

Good for you. Fortunately, you can choose to drive a car without it if you'd like. The rest of us want it. Great having choices, huh?
[doublepost=1458305140][/doublepost]

Gaprofitt said:
Carplay quite frankly, sucks.. It's a half baked solution that doesn't work very well..
Click to expand...

Disagree, as someone who's had it for over a year.
Reactions: Kissaragi, Jason83, QuarterSwede and 2 others
6

Meh I really lost the need for CarPlay after getting my Mazda. The infotainment system in the 2016 CX-5 works well, has plenty of functionality and stays out of my way while driving.
Reactions: Benjamin Frost

My first thought when I saw that picture was, "Wow, that looks familiar."

When I lived in the States many years ago, I lived in a house that was very much like that one — red with white trim, built on pilings over the water, with a rocky beach just a stone's throw away. So, I assure you, it actually does happen in real life.

I was just a recent college grad on an entry-level salary, though. I rented the place for a couple of years, but could never have afforded to buy it.
Reactions: Jason83

Better late than never, I suppose. Toyota, I hope you're keeping an eye-out (for your sake, not because I would buy one).

Subaru, yeah you! Get on with it!
Reactions: QuarterSwede

Gaprofitt said:
Carplay quite frankly, sucks.. It's a half baked solution that doesn't work very well..
Click to expand...

Totally disagree. It's not only easier to use than anything else out there (save, possibly Android Auto that I have as well and don't use) but because of this I'm a much safer driver now too as I don't have to look at anything. This is a boon for those that have text heavy jobs and travel. Caveat: it works loads better on 9.3 beta 7.
Last edited: Mar 19, 2016
Reactions: iGreek and Jason83
You must log in or register to reply here.
Share:
Facebook Twitter Reddit Email Share Link
Register on MacRumors! This sidebar will go away, and you'll see fewer ads.
Sign Up
Top Bottom