Ken Segall was a creative director at TBWA\Chiat\Day and worked with Steve Jobs for years, including at NeXT and Apple. He wrote a book about his experiences called Insanely Simple that posited "Simplicity" as the driving force behind everything Steve Jobs did. 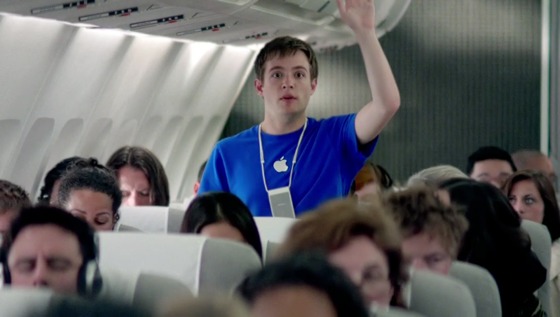 In a post on his personal site, Segall dissects the new 'Genius' television ads that Apple began running during the Olympics last Friday.

I know it's hard to say after viewing the new batch of Mac ads that debuted on the Olympics. I'm still in a bit of shock myself.

Sure, Apple has had a low point or two in its advertising past -- but its low points are usually higher than most advertisers' high points.

This is different. These ads are causing a widespread gagging response, and deservedly so. I honestly can't remember a single Apple campaign that's been received so poorly.
Click to expand...

Segall goes on to address a number of hypothetical points relating to the ads, including "I did wonder if it was a good idea to make customers seem so clueless." (No.) and "Ken, you're missing the obvious. Clearly these ads are targeted at first-timers, not for you." ("That's a seemingly logical defense. It's also a horrible one.")

He finishes by pointing out that no one can know what Steve Jobs would have done, and it's a foolish question to ponder.

None of us can possibly know what Steve would do. Steve was a master marketer, but he was also perfectly capable of a lapse in judgment. It's unfortunate that this campaign is appearing now, nine months after Steve passed away, because the timing only fuels the argument that everything will crumble now that Steve is gone. I don't buy that.
Click to expand...

One of the ads, 'Basically', is embedded above. 'Labor Day' and 'Mayday' are viewable on YouTube.

Agreed. the ads weren't all that.
T

They're not great, but they're not THAT bad. Raised a little chuckle, which is more than most ads do.

I never thought they were terrible, but they aren't great either. The sky however is not falling and we shouldn't worry. After all, these ads are causing people to talk which is always good in advertising!
R

I'm really not sure how these made it through to the air. They are pretty bad...especially the two non-airplane ones.

My guess is they'll pull them from the air this week if not today and we'll see the Siri/iPhone ads back on immediately.

I've seen them during the Olympics and all I could think of was:

"Dude, you're getting a Dell."

Hey in fact... Apple is using a fairly young, nearly hipster-ish looking tech guy... APPLE IS COPYING DELL!!! SOME CALL THE LAWERS AND SUE THEM FOR ALL THEIR WORTH!!!

These ads are terrible. Can't believe Apple did this.
M

Something was unmistakably off after viewing these ads. I prefer the Job-era advertisements, simplicity is captivating.
B

In an ethereal plane of existence.

I thought they were cute... I think the Apple community is hypercritical to be honest. I enjoyed them.
B

Not horrible ads. Just like the Dave Matthews Band's CDs after "Before These Crowded Streets" aren't 'horrible.' But compared to before the fold, they are pretty bad.

I personally thought they were different and refreshing. I liked them.
S

I would take ANYTHING Ken Segall says, with a grain of salt.

All Ken is trying to do is SELL BOOKS with his comments. Nothing more.

His comments are an ADVERTISEMENT for his book.

They suit the current generation of brain-dead iPhone sheep tbh.

I agree^^^ They're made to target people who have had problems (using windows) using computers for the easiest task. Windows is so horrible that the average computer user EXPECTS a simple task to be very difficult. I think the commercials are pretty decent. It doesn't describe the end user to be as "stupid" as most would think. It realy just points out the preconceived notions that all computers are difficult - except the mac.

People read into this stuff way too much...

I've seen tech illiterate people that embody the characters in these commercials, and then some. This ad sells Apple Retail to them beautifully. You see it everyday in an Apple store.
R

Master Atrus said:
I never thought they were terrible, but they aren't great either. The sky however is not falling and we shouldn't worry. After all, these ads are causing people to talk which is always good in advertising!
Click to expand...

No, getting people to talk because they cannot stand your ad is not good advertising. That is a cliche that is totally wrong.

I thought the ads did a good job showcasing the support you get whenever you buy an Apple product... something Apple needs to advertise more of since its something customers really care about. The humor was in no way more insulting than the "Get a Mac" ads. I liked these.

I like the Ads (well Basically and Labour Day) but I think after Apple's product focused ads they are a bit of a let down.

My brother in law and I were watching the olympics when this commercial came on. He said "Apple is starting to do commercials like this?" and me being an Apple fan boy and ex-employee stated "No. Impossible, probably a best buy ad or Target". & then the unthinkable happened.

Mac came up. His next words were...

I honestly think Apple's best days are ahead of it and I don't think that anything will slow them down. We could only speculate where the company will go, but then again, it's Apple. I have no doubt they will "Wow" us many more times to come.
S

These ads are indeed, horrible.
M