Samsung has decided not to include a fingerprint scanner under the display of its next-generation Galaxy S9 and Galaxy S9+ smartphones due to continued technical difficulties, according to South Korea's The Investor. 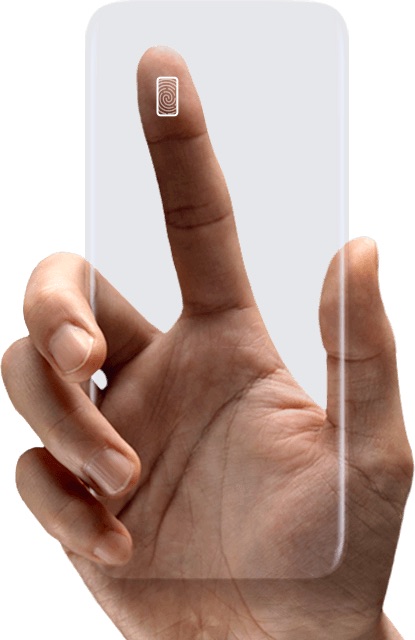 Instead, the fingerprint scanner will likely remain positioned on the back of each device, just like the current Galaxy S8 and Galaxy S8+ models.

Fingerprint scanning is one of three biometric options for unlocking the Galaxy S8 alongside iris scanning and facial recognition. Samsung says all three solutions provide "defense-grade security" around the clock.

Shortly after the Galaxy S8 launched, however, videos surfaced showing that Samsung's facial recognition system could be fairly easily duped with a picture of someone. The iris scanner was also tricked with contact lenses. 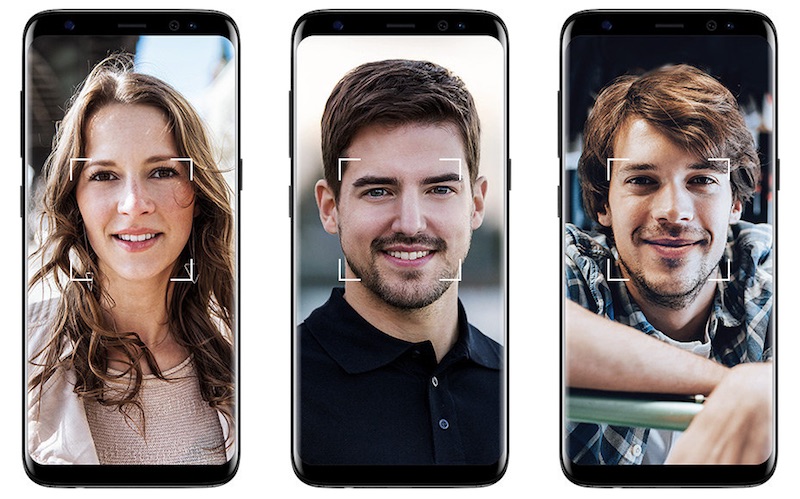 In fine print on its website, Samsung admits that its facial recognition system is "less secure than pattern, PIN, or password." Facial recognition can't be used to authenticate access to the Galaxy S8's Secure Folder or Samsung Pay.

"It is important to reiterate that facial recognition, while convenient, can only be used for opening your Galaxy S8 and currently cannot be used to authenticate access to Samsung Pay or Secure Folder," the company told Ars Technica in March.

Apple was widely rumored to be attempting to integrate Touch ID under the display on the iPhone X, or even on the side or back of the device, but the company's hardware engineering chief Dan Riccio suggested it ditched any form of fingerprint scanning after hitting "early line of sight" with Face ID. 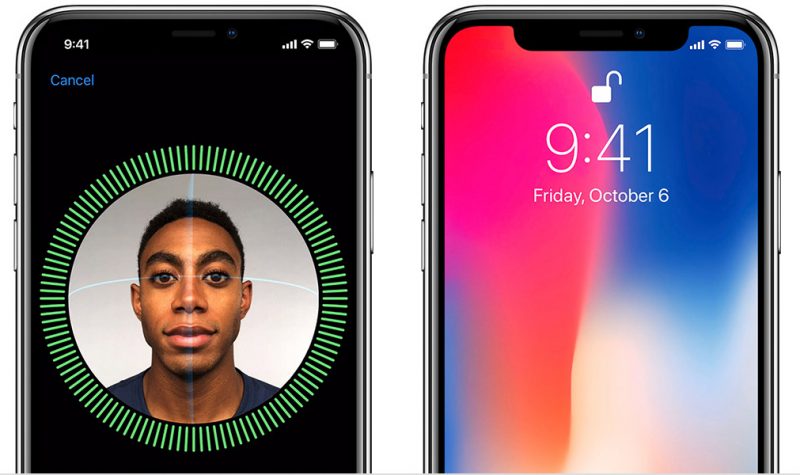 Apple is so confident in Face ID that it is planning to abandon Touch ID in favor of the TrueDepth system on all of its new iPhone models released in 2018, according to well-connected KGI Securities analyst Ming-Chi Kuo.

Apple says Face ID only has a possibility of being less reliable for identical twins, siblings who look alike, and children under 13 years of age, the latter because their distinct facial features may not have fully developed.

Apple's Face ID security paper explains how the TrueDepth camera projects and reads over 30,000 infrared dots to form a depth map of your face, along with a 2D infrared image. This data is used to create a sequence of 2D images and depth maps, which are digitally signed and sent to the Secure Enclave.

Face ID is designed to confirm user attention, ensuring a lower false match rate, and mitigation against both digital and physical spoofing.

Let’s see them put that in their apple bashing commercial...
Reactions: Cameroncafe10a, DemetriJ, szabogabor10 and 12 others

Hardy1989 said:
Let’s see them put that in their apple bashing commercial...
Click to expand...

I can see it now. A user boasting about all the great features of the latest Galaxy to their iPhone-wielding friend, and only at the end of the commercial do they realise they've been talking to a cardboard cutout the entire time.
Reactions: Ntombi, szabogabor10, duffman9000 and 5 others

Yet another year of the iPhone continuing to better the crappy cheap tacky Samsung
Reactions: DemetriJ, szabogabor10, vito and 3 others

This makes me worry that the prices of all future iPhones will start at least at around the $900 price point.
Reactions: deany, Dj64Mk7 and quaresma

Just place the fingerprint scanner below the camera lens this time, Samsung. Follow HTC, Huawei, and LG.
Reactions: Cameroncafe10a, szabogabor10, deany and 9 others

RowellE said:
This makes me worry that the prices of all future iPhones will start at least at around the $900 price point.
Click to expand...

But will definitely continue to be financed and/or subsidized by the phone companies. I can only imagine the small sliver of iphone users that pay cash for their handset. The sticker price becomes more and more irrelevant as the business models of phone companies adjusts to mitigate the sticker shock.

Say what you want about apple's "courage" but they definitely jump in feet first and don't look back. Headphone jack? More and more people are going wireless anyway. Fingerprint scanner? Our faceID will render it passé. Home button? It was fun while it lasted.
Reactions: Will.O.Bie
M

I had a fear that I would miss Touch ID, but after a couple days with my X, I don't miss it at all. Face ID is great!
Reactions: zooby, Ntombi, Cameroncafe10a and 18 others

Samsung was probably waiting for Apple to figure out the Touch ID under the screen first and then copy/adapt from that. But now they'd have to figure it out themselves.
Reactions: Ntombi, Cameroncafe10a, DemetriJ and 20 others
I

Knowing how Samsung loves to copy Apple, I wouldn’t be surprised to see Samsung really push their iris and facial scans, no matter how limited, into their mainstream advertising.

But I give Samsung some credit... They still have the headphone jack.
Reactions: AZ63

Fingerprint scanners in 2018?? Those neanderthals.

Seriously though, "defense-grade" security that can be duped by a photograph or contact lens is laughable. Face ID can't even be duped by professional mask makers. Once again, Apple is multiple years ahead of the competition.
Reactions: Cameroncafe10a, DemetriJ, vito and 8 others
N

scrapesleon said:
If Samsung didn’t get rid of the headphone jack you really think they going to get rid of Touch ID
Click to expand...

Samsung is too scare of removing anything. They tried with memory card slot and had to bring it back. Samsung is known to pack their phone with a tons of mediocre stuff. But I give them point for the beautiful displays they do. ANd their galaxy design on e recent years have been great.

RowellE said:
This makes me worry that the prices of all future iPhones will start at least at around the $900 price point.
Click to expand...

The X has at least 4 things jacking up its price: OLED screen, more complex motherboard, stainless frame, and Face ID hardware. All of those will get cheaper over time except perhaps the stainless frame, which probably isn't a huge adder anyway. I suspect the screen is the main culprit, and if we ever start to get some valid competition between manufacturers with this stuff (it's been almost exclusively Samsung for mobile OLED and LG for TV OLED), then prices could plummet. This should allow Apple to maintain new phone models in the range of $700-800.
Reactions: PickUrPoison
2

scrapesleon said:
If Samsung didn’t get rid of the headphone jack you really think they going to get rid of Touch ID
Click to expand...

Always wondered how you using the rear fingerprint sensor when the phone in a car dock.
Reactions: ILikeAllOS, richhh, t1meless1nf1n1t and 1 other person

A small sliver is not "no one ever" but in the grand scheme an ever shrinking percentage.
D

GadgetBen said:
Yet another year of the iPhone continuing to better the crappy cheap tacky Samsung
Click to expand...

But Apple was going to do it as well so would they have been tacky if they did the fingerprint screen scanner? This is one area I wished Apple would have gone for instead of quitting

Samsung users need to "grow up" and get an iPhone X with a facial recognition system that is actually secure.
Reactions: szabogabor10, eltoslightfoot, richhh and 1 other person
M

Truth to be told...I don't miss Touch ID at all! Moreover, every time I have to pick up my old 6S Plus, that home button and the fact that you have to press it feels very outdated. Granted, the 8 Plus felt a little more robust due to its new home button, but how many times did it fail to work due to wet hands!
Yes, Face ID might be 1 second slower now than 2nd gen Touch ID, but for the first gen it's absolutely perfect and waaaay better than the first generation of Touch ID. I can see that Apple will only improve it by speeding it up and implementing wider angles to unlock it.
Reactions: Ntombi, szabogabor10, ILikeAllOS and 8 others

After a few days of Face ID , I'm ready to leave Touch ID behind. s9 gonna look dated before its even launched !
Reactions: szabogabor10, ILikeAllOS, eltoslightfoot and 1 other person
K

applesith said:
Samsung was probably waiting for Apple to figure out the Touch ID under the screen first and then copy/adapt from that. But now they'd have to figure it out themselves.
Click to expand...

Correct. Seeing that Samsung makes and assemble the display components for Apple, this sounds very likely that they would copy how it was done.
S

Samsung executives: "Sh*t, we actually have to think for ourselves?"
Reactions: DemetriJ, szabogabor10, ILikeAllOS and 4 others
K

dominiongamma said:
But Apple was going to do it as well so would they have been tacky if they did the fingerprint screen scanner? This is one area I wished Apple would have gone for instead of quitting
Click to expand...

The rumors said Apple was looking into Touch ID under screen. Apple themselves said they were not looking at such methods once they’ve realized the potential of Face ID. Face ID have been in development for more than 3 years. About the same time Touch ID was introduced, so Apple was already looking past Touch ID way back then.

I think the rumors were false, it was an easy rumor to spread since it seamed like the next logical move for Apple to make by putting Touch ID in the display.
Reactions: Ntombi, HoosBruce, PickUrPoison and 1 other person
You must log in or register to reply here.
Share:
Facebook Twitter Reddit Email Share Link
Register on MacRumors! This sidebar will go away, and you'll see fewer ads.
Sign Up
Top Bottom