Google today previewed its next-generation Pixel 6 and Pixel 6 Pro, which are set to launch later this year. These are Google's new flagship smartphones, with a redesign that includes a rear camera bar and tons of other new technologies.

Subscribe to the MacRumors YouTube channel for more videos.​
Google's Pixel 6 and Pixel 6 Pro will be the first smartphones using Google's custom-designed Tensor SoC that was created specifically for the Pixel phones. 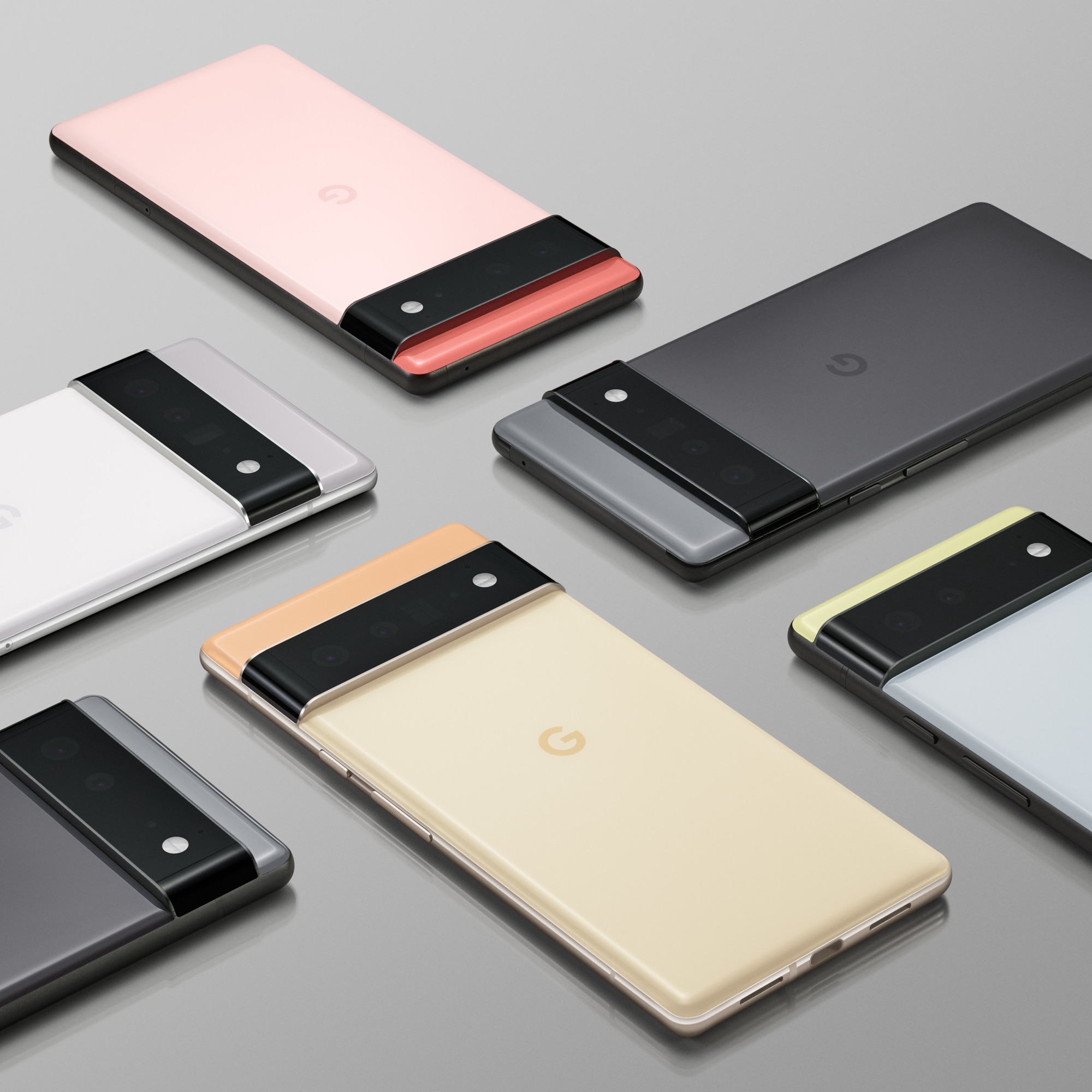 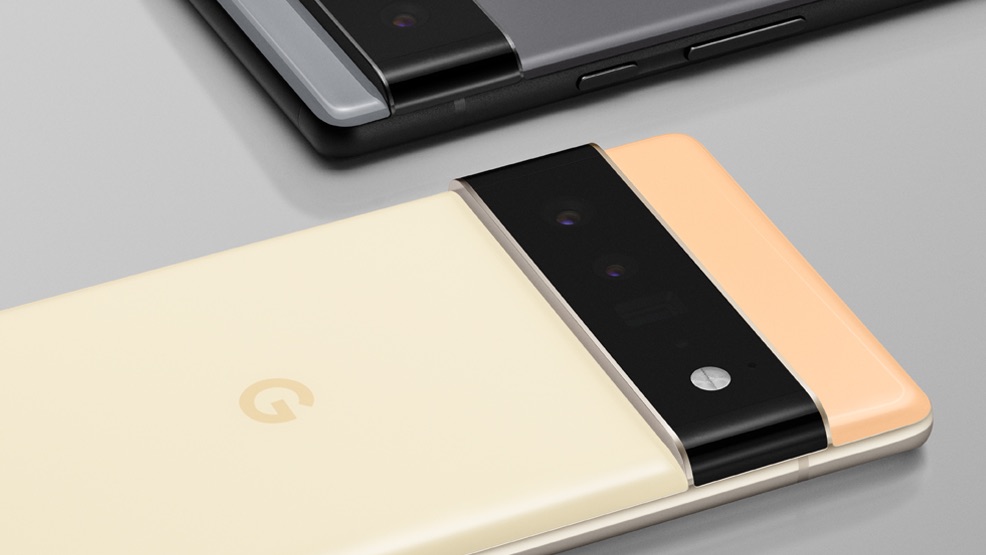 Each of the new smartphones is available in three color combos with a rear camera bar setup. The Pixel 6 Pro is equipped with wide, ultra wide, and telephoto camera lenses, and the telephoto lens has 4x optical zoom capabilities. The Pixel 6 lacks the telephoto lens, but both phones have an updated sensor that lets in 150 percent more light.


A Material You user interface will provide what Google says is a "fluid" experience for the colors, camera, and form factor of the new device.


https://twitter.com/i/web/status/1422231294025609226
Several sites, including Gizmodo, The Verge, and Business Insider were able to either test out the Pixel 6 or speak with Google executives about its capabilities, so those reviews are worth checking out for those who want to know more about Google's upcoming smartphones. The Verge has suggested that this is Google's first true attempt at a "competitive flagship phone."


Google has not yet provided a release date for the Pixel 6 and Pixel 6 Pro, but these new smartphones will directly compete with Apple's upcoming iPhone 13 lineup featuring the iPhone 13, iPhone 13 mini, iPhone 13 Pro, and iPhone 13 Pro Max.

Pricing is not yet available, but the Pixel 5 that came out last year cost $699, so Pixel 6 pricing could start at a similar level.

Right before… iPhone 13 is about to be released. Let’s see what Samsung has to show.

Who was first to use the “Pro” designation for larger devices?
Reactions: Lukkee24, Sikh, smoking monkey and 3 others
F

cool cool cool I'll get one as soon as it runs iOS
Reactions: BvizioN, alejandrooo, valleian and 10 others

I’m rooting for Google. The more competition, the better.
Reactions: tbayrgs, TakeshimaIslands, freedomlinux and 55 others
D

As to pixel phones themselves, I have a 4a as a secondary phone. While I am an iPhone fan through and through and will upgrade my now venerable 11PM to a 13/12S PM next month, I am more impressed with it, bare bones in design though it may be, then I thought I'd be. For one, the camera takes amazing photos.
Reactions: snipr125, kolebee, JunBringer and 1 other person
H

You say "custom SoC" and I say a re-branded Samsung Exynos, i.e. inferior to pretty much anything Qualcomm makes these days.
Reactions: TakeshimaIslands, freedomlinux, BvizioN and 7 others
M

Must be a beast with that M2 chip!
Reactions: huge_apple_fangirl, Sikh, valleian and 1 other person

That yellow/orange one looks awesome. I really like the visor design, reminds me a lot of the Nexus 6P.
Reactions: Lukkee24, shadowv4x, peanuts_of_pathos and 6 others
L

I have a Pixel 3XL and love it.

Before that I'd owned a half dozen or so iphones.

Depending on pricing, I'll be in for a Pro 6
Reactions: magicman32
P

I'm not a fan of camera bumps—just make the phone thicker and use the extra space for battery or whatnot—but if we have to have camera bumps, and *looks at phone landscape* apparently we do, I like Google's approach.
Reactions: Lukkee24, CarpalMac, SuperCachetes and 7 others

ghanwani said:
Who was first to use the “Pro” designation for larger devices?
Click to expand...

Lol are we just coming up with fake “accomplishments” now or something, what kind of bragging point is this
Reactions: Crosshatch, Lukkee24, CarpalMac and 8 others
G

This proves my suspicion. For some bizarre reason there are a multitude of Non Apple fans who cheer Google and slam Apple on an Apple fan site. I really don’t get the dynamic unless they are being paid to be here. Real Apple fans would never camp out on Android sites and definitely wouldn’t be signing up to comment. It makes no sense, because we prefer to use our limited time to learn about Apple.
Reactions: TheDemogordon, tbayrgs, Saturn1217 and 25 others

Wow someone made an uglier back of a phone than Apple did. Good job, Google.
Reactions: TheDemogordon, Lukkee24, mymacrumorsname and 6 others
G

And why do the last 3 of us have the same MacRumors #?

genovelle said:
This proves my suspicion. For some bizarre reason there are a multitude of Non Apple fans who cheer Google and slam Apple on an Apple fan site. I really don’t get the dynamic unless they are being paid to be here. Real Apple fans would never camp out on Android sites and definitely wouldn’t be signing up to comment. It makes no sense, because we prefer to use our limited time to learn about Apple.
Click to expand...

Never thought of the possibilty of anyone being a macOS afficionado, but thinks iOS is not as great?
Reactions: TheDemogordon, sactownbwoy, tbayrgs and 8 others
Y

ghanwani said:
Who was first to use the “Pro” designation for larger devices?
Click to expand...

I don't know if OnePlus was the first, but this pre-dates the iPhone 11 Pro, the first iPhone to use the pro moniker.

So before anyone says it, no, Google did not copy Apple.
Reactions: Lukkee24

I don't love it but if you are going to have a bump at the back go all in, which is what they appear to be doing.

It won't rock when sitting on the desk like my iPhone without a cover. And that looks like it will not need a very thick case to even it all out.
Reactions: Lukkee24, CarpalMac, SuperCachetes and 1 other person
A

Absolute Trainwreck said:
Lol are we just coming up with fake “accomplishments” now or something, what kind of bragging point is this
Click to expand...

How can you not understand the significance of using the Pro designation? Clearly it is a word, that should belong to whatever company used it first. I am surprised you even asked about it. ?

Depending on what they have done with the bar (like a periscope lens), I could like that as a feature. Not in love with the colors. Not interested in Android, and not convinced the CPU will beat the A15 (the only metric that matters). Glad to see they still seem to be trying.
Last edited: Aug 3, 2021
Reactions: kolebee and cmaier
You must log in or register to reply here.
Share:
Facebook Twitter Reddit Email Share Link
Register on MacRumors! This sidebar will go away, and you'll see fewer ads.
Sign Up
Top Bottom