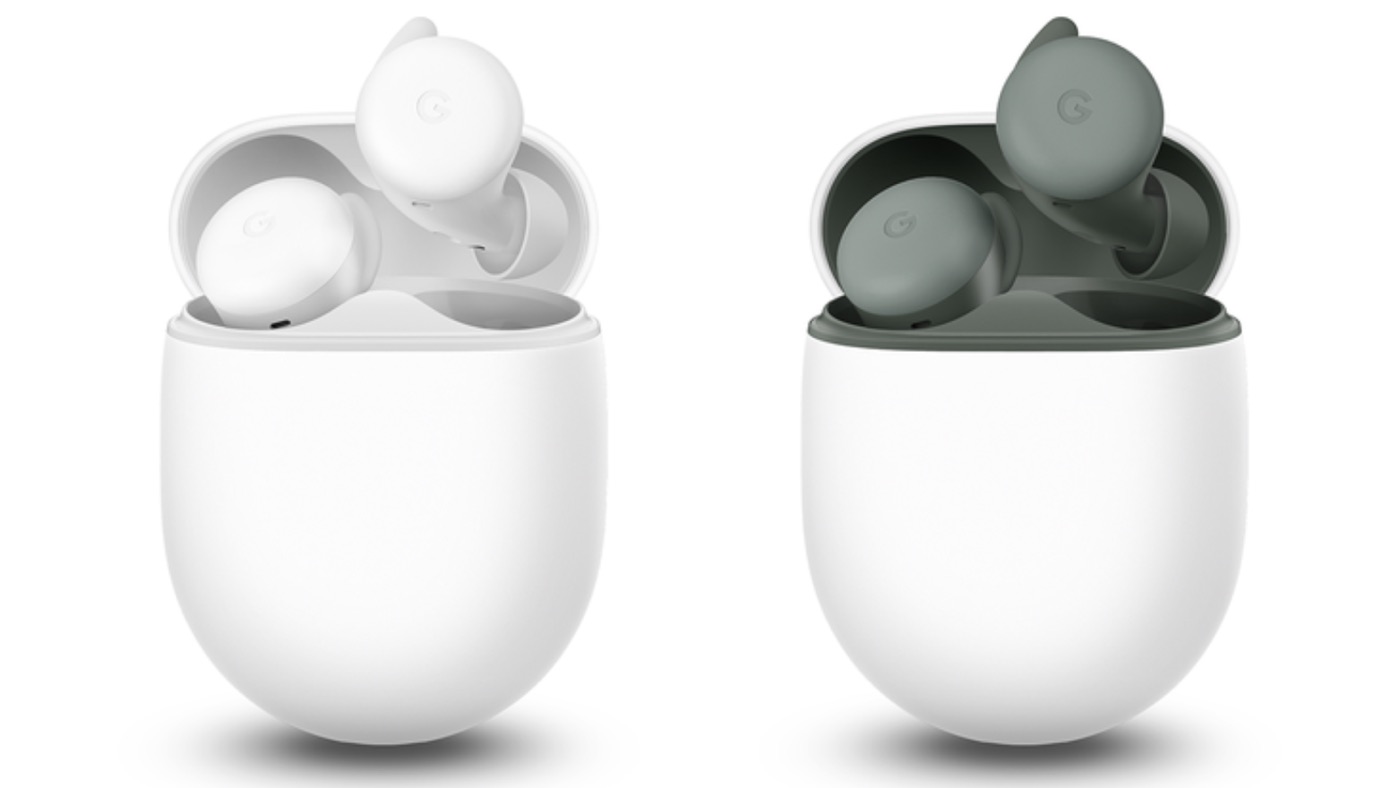 Google has also updated the design of the Pixel Buds A-Series to create a good seal in the ears while ensuring a comfortable fit. Google says they've been designed with a "gentle seal" and a spatial vent to reduce in-ear pressure.

There's no noise cancellation as in the AirPods Pro, but Google has added an Adaptive Sound function that increases or decreases the volume of the headphones based on your surroundings.

For calls, there are beamforming microphones to focus on voice and reduce outside noise, and there's built-in Google Assistant connectivity with real-time language translation and other "Hey Google" features.

Pixel Buds A-Series come in white and dark olive and feature up to five hours of listening time on a single charge or up to 24 hours with the included charging case, which is similar to the AirPods battery life. They're IPX4 water resistant and Google says they can be worn during a sweaty workout or in the rain.

Google's Pixel Buds A-Series likely won't be as appealing to most iPhone users as AirPods because AirPods have a lot of built-in integrations that are missing with Pixel Buds, but the significant price drop could perhaps inspire Apple to make its own earbuds more affordable in the future to compete.

Pixel Buds A-Series are available for preorder in the United States and Canada and will be arriving to customers starting on June 17.

In my opinion, 99$ is the right price for the AirPods too.
Reactions: Luke MacWalker, CarpalMac, rumormiller and 25 others

Now with 100% more tracking! But seriously, these look okay to me, how do they sound I wonder... (I have not used any pixel buds)
Reactions: progx and macsplusmacs

The catch is that they send your earwax information to Google. ?
Reactions: rumormiller, tongxinshe, AvisDeene and 18 others
J

If those won’t fall out of my ears like the AirPods do… maybe
Reactions: Lemon Olive

I couldn’t care less about what Google does with it’s products..

But I just LOVE how their buds charger looks almost identical to Apples Airpods charger.

Google and all these trash companies, literally hang off Apples every design move?
Reactions: magicman32, Moi Ici, CarpalMac and 20 others
M

Google can charge this price for a variety of reasons including the fact that 89% of the revenue comes from advertising which they make "better" buy following you around the web.
Reactions: Moi Ici, progx, subi257 and 1 other person
B

-BigMac- said:
But I just LOVE how their buds charger looks almost identical to Apples Airpods charger.
Click to expand...

What else is it supposed to look like? Things pretty much drive towards an optimal shape. It's just like all smartphones look like a rectangle.
Reactions: trashmac, magicman32, CarpalMac and 9 others
J

I just wish they, or Amazon, or "somebody major" would make essentially an AirPods 1/2 clone.

I really really love that form factor where it just rests in the ear and is semi-open to outside sounds. (as opposed to a "plug" type)

Alternatively, I wish Apple would just price the AirPods 1/2 style at the appropriate $79-99, particularly given their age and dated style/technology at this point in time.

Maybe they keep them around as AirPods Classic? (works for me!)
Reactions: Agit21 and Mr Todhunter

AirPods should be $129 and $149. I think that would put a real crunch on the competition.
Reactions: Sebosz and AmazeSE

Spock said:
AirPods should be $129 and $149. I think that would put a real crunch on the competition.
Click to expand...

I honestly think the basic AirPods should hit that $99 price point.
It's a 5 year old style and mostly dated tech/specs now.
Reactions: Luke MacWalker, tongxinshe, AvisDeene and 3 others

The design looks funny to me I don’t know why lol
Reactions: ronntaylor, Lemon Olive and macsplusmacs

turbineseaplane said:
I honestly think the basic AirPods should hit that $99 price point.
It's a 5 year old style and mostly dated tech/specs now.
Click to expand...

There are new AirPods ready for launch.
Reactions: SFjohn
J

turbineseaplane said:
I honestly think the basic AirPods should hit that $99 price point.
It's a 5 year old style and mostly dated tech/specs now.
Click to expand...

There is no reason the wired charging case AirPods 2 are still $159. And wireless $40 more.

Not when the Pros with ANC are $250 and often $200 on sale. The Pros are a relatively good deal with ANC at that price and hold up to more expensive ANC buds.

But for super basic wireless buds, they are, and always were, a $99/$129 product really. They dont compete with other $160-$200 buds these days. When AirPods first same out sure, but tech has changed a lot.

Remember when everybody made fun of the AirPods design and here we are a couple of years later, and everybody has copied/heavily bought from the design.
Reactions: Moonlight and ronntaylor

DinkThifferent said:
Remember when everybody made fun of the AirPods design and here we are a couple of years later, and everybody has copied/heavily bought from the design.
Click to expand...

I was going to say these look NOTHING like Airpods other than the idea of the case. Which there are only so many ways to store buds to charge.

But not "douche pencil" buds as Flossy Carter would say. The stems look stupid (they were a tech limit of the time) and if all rumors (and the rumored/leaked Beats in-ear stemless that will likely be the same as the next Airpod Pro 2s) are true are going away anyway with Apple too. So is Apple then copying everyone else too removing the stem?

Let's not pretend everyone doesnt copy everyone else's good ideas. The iPhone would be trash today if Apple didnt borrow some ideas from Samsung et al.
Reactions: CarpalMac, pilotpat and brucemr

jk1221 said:
I was going to say these look NOTHING like Airpods other than the idea of the case. Which there are only so many ways to store buds to charge.
Click to expand...

Anyone else making wireless earbuds and then being accused of "copying Apple!!" feels like something John Gruber would say.

The Reality Distortion Field is alive, well, and stronger than ever.
Reactions: CarpalMac, pilotpat and jk1221

I'm still waiting for someone to make a decent pair of earbuds that can stand up to my sweaty summer suns. So far, only Jaybirds (the wired ones) have lasted me more than a year or two.
D

iDento said:
In my opinion, 99$ is the right price for the AirPods too.
Click to expand...

You’re absolutely correct as I consider them disposal tech. Their batteries die or severely degraded on me every 18 months with moderate use.
Reactions: iDento, unchecked, Sebosz and 1 other person
J

Anyone else making wireless earbuds and then being accused of "copying Apple!!" feels like something John Gruber would say.

The Reality Distortion Field is alive, well, and stronger than ever.
Click to expand...

Or like the iPhone would not be utter trash to say if Apple didnt borrow ideas from Android manufacturers.

We would still have low res LCD with a few MP camera and little storage. And plastic phones. Apple has VERY rarely been on the forefront of pushing meaningful tech forward (no, stuff LIDAR is a joke and useless real world); especially in phones. Most of it is tech others have worked out the kiinks in already.

Its utterly amazing. Its like people believe the nonsense of Apple marketing hype like they invent everything.
Reactions: CarpalMac, poematik13 and turbineseaplane

I often wonder how many iPhone enthusiasts realize how many CORE iPhone features actually started in the jailbreak scene also.

If Apple would get out from under its own ego they could have all their platforms enhanced dramatically and more quickly by the ideas and creativity of the masses.