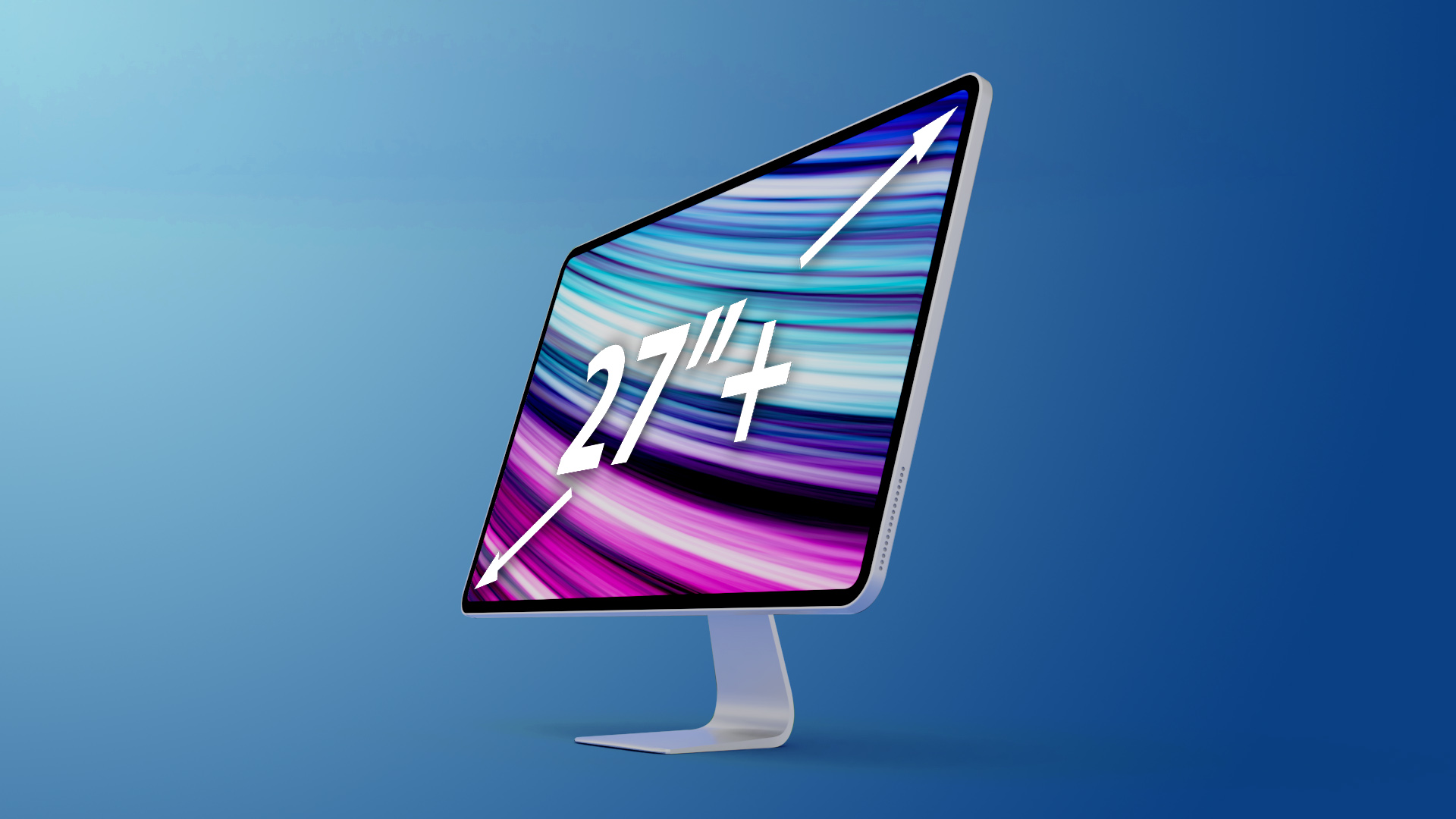 Writing in the latest instalment of his Power On newsletter, Gurman says the fact that Apple recently increased the screen size for the smaller iMac from 21.5 to 24 inches suggests to him that the 27-inch model could see an equivalent size increase.

I absolutely still believe that a larger, redesigned iMac to replace the Intel 27-inch models is en route. Apple increasing the screen size of the smaller model from 21.5 inches to 24 inches seems to indicate that the 27-inch model could see a size increase as well. I don't think, however, that Apple will launch the larger model with the same M1 chip that's in the smaller model. It likely will be an M1X, the beefier version of the current M1, or an M2X.
Click to expand...

Apple has been working on a larger iMac with in-house processors for some time, but development of that version was reportedly paused to let Apple focus on releasing the redesigned 24-inch model, which was announced in April.

The 27-inch Intel models that remain in Apple's lineup launched in August 2020, suggesting they are reaching the end of their production cycle.

In a separate newsletter tidbit, Gurman also played down the idea that Apple could bring Touch ID to the Apple Watch one day. Gurman conceded that he could see the utility of Touch ID in the Apple Watch to approve app and media download payments, but said he didn't see that happening "any time soon, if ever."

Lets hope this one will keep the chin to make all the ventilation and cooling away from the display
Reactions: Reggiebaldwin, tpfang56, grahamwright1 and 13 others

That’s great news!. Wonder when Apple will release it to the public.
Last edited: Jul 12, 2021
Reactions: Braderunner, svish, LeadingHeat and 1 other person
S

you are hearing it wrong )
Reactions: Juuro and awsom82

Black bezel or it’s DOA for my use.
Reactions: Reggiebaldwin, usagora, awsom82 and 4 others
L

We should confirm with Prosser for an expected release date.
Reactions: amartinez1660, DesertDrummer, DinkThifferent and 9 others

that mockup maybe made sense before the new iMac had been revealed but we all know the "Pro" is not going to look like this mockup either.
Reactions: hooptyuber, Esmereldah, Luke MacWalker and 5 others

Height adjustment, white bezel and real colors in the front instead of pastel please.
Reactions: iFiAMRUU, Reggiebaldwin, awsom82 and 10 others
A

This sounds like pure speculation. We can all just make up our own thoughts about what Apple is planning next.
Reactions: DaMacMan1, michaelnugent, themachugger and 14 others

What a ridiculous non-story, backed by literally nothing.

I want a larger iMac as soon as possible, with the biggest screen please and the best M1X/M2X processor!
Reactions: iFiAMRUU, Stenik and JohnArtist

I believe somebody might eat pizza this Friday
Reactions: DaMacMan1, amartinez1660, Nermal and 17 others
M

And PLSSS add support for at least 2 external additonal monitors. Otherweise I'll have to stick to my Intel iMac for another decade.
L

As a French dude, "en route" term make me smile. Why using this when you have plenty of terms to say the exact same thing ?
I guess jounalists like sometimes take the exotic "route" just to appear a bit more original ?
Reactions: iFiAMRUU, Reggiebaldwin, josselinco and 3 others

frumpsnake said:
“I…believe”
“seems to indicate”
“It likely will be…”
“I don’t think…”

What a ridiculous non-story, backed by literally nothing.

It can be frustrating to read.

My understanding is that these 'insider' reports have to be couched in this way, in order to avoid claims being attributable directly to Apple. Mark Gurman seems to be a mix of an analyst (gaining info from supply chains) and tech industry reporter (with sources at Apple).

It seems pretty clear that some of what he reports is 'information-release' that has been designed to steer the discourse in a particular direction/away from misconceptions.
Reactions: amartinez1660, awsom82, Razorpit and 1 other person

I suspect the larger iMac will come with a 6K 32-inch display which would be some cheaper, consumer-level version of the Pro Display XDR (unsurprisingly, it has a PPI count similar to the 24-inch iMac, which can be some sort of indication).

Apple may be behind its schedule. The 16-inch MacBook Pro was released in November 2019, and is now probably a poor value to buy. The higher-end 13-inch MacBook Pro got a spec bump in May 2020 and the 27-inch iMac had one in August 2020, which may be an indication that these models could take longer to receive the M-series processor. Still, we are almost a year since the last Mac with Intel processor was released. In a few months, Intel will release its 12th generation processors, and some Macs are still stuck in the 9th and 10th generations waiting for the transition to Apple silicon.
M

DCIFRTHS said:
Black bezel or it’s DOA for my use.
Click to expand...

They've gotta do a black bezel with a space grey chasis, same with the new Macbook Pros. I think they'll keep white bezels for the consumer-level products like the new Air and obviously 24" iMac.
Reactions: Reggiebaldwin and ElectronGuru

I hope we get some colourful options like the M1 version. And anything but black as a bezel, I don't know why we gave up colour accuracy to make the colours 'pop'.
Reactions: Reggiebaldwin, MacN'Dawg, TheGeneralist and 1 other person
T

What’s with the completely made up fake mock-up photo? Rumor sites need to stop feeding this and give the wrong impression.

The mock-up should have the same design as the 24” because that’s what it will actually look like.
Reactions: DaMacMan1, amartinez1660, Alex Cai and 12 others