Following the introduction of the new 13-inch Retina MacBook Pro at its media event, Apple invited attendees to spend some time with the machine. Overall, the early hands-on impressions are favorable, with the reduction in thickness and weight making a significant difference for professionals on the go, but the high price tag associated with the Retina display and solid-state storage mean that it likely won't quite be able to inherit the non-Retina model's popularity just yet.

For starters, it's wildly thin. No, not manilla envelope thin, but thin enough to slip into most briefcases and backpacks without the consumer even noticing. Outside of that, it's mostly a shrunken version of the 15-incher let loose over the summer. The unibody design is as tight as ever, with the fit and finish continuing to impress. In my estimation, this is Apple's most deliberate move yet to differentiate the 13-inch MacBook Pro from the 13-inch MacBook Air.
Click to expand... 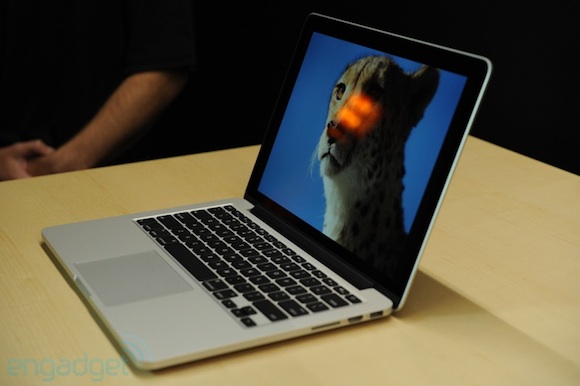 It's clear that Apple wants this new version of its top-performer to take over as a product that redefines the laptop category, and judging by limited hands-on experience, there's good reason to believe they'll eventually get their wish, though not just yet. [..]

As for how it performed, it was very much like using the 15-inch rMBP, which is my main machine currently. In the hand, however, it feels significantly lighter, at about a pound lighter than the bigger model. That's a big difference for a machine you carry around with you all day, and alone might sway some users, price considerations aside.
Click to expand...

Freshly announced today, and falling under our eager fingers straight after Apple's San Jose launch event, the new notebook follows the successful route of its bigger brother. Gone is the optical drive, in comes the super-high-resolution screen, and wide open pop our wallets.

The screen size may be smaller - and lower resolution, too, at 2560 x 1600, though for an overall higher pixel density of 227ppi - but actually the 13-inch model is slightly thicker, at 0.75-inches. In contrast, the 15-inch Retina version is 0.71-inches thick. You don't really notice the difference, however, and the advantage in weight, with near a full pound dropped, more than makes up for it.
Click to expand...

The resolution settings for the display are just like the larger MacBook Pro -- but the maximum allowed resolution is 1680 x 1050, unlike the 1920 x 1080 setting offered on the 15-inch model. Still, 1680 x 1050 is a tremendous option on a display of this size, though at the "best for Retina" setting the screen offers an effective 1280 x 800. If you've been using a 15-inch MacBook Pro for the screen size, the 13-inch just got a ton more attractive.
Click to expand...

With no discrete graphics card, what differentiates this from a MacBook Air [if they were to drop a Retina display in it?]
Comment

I will never buy a 13" macbook.
For portablility, I like the 11" air, and for real work, I can't deal with a screen smaller than 15". Even that is too small sometimes. I miss the 17".
Comment

Mr Fusion said:
With no discrete graphics card, what differentiates this from a MacBook Air [if they were to drop a Retina display in it?]
Click to expand...

My wallet is in ICU critical at the moment. I don't know how much more it can take.
Comment
S

There are 329 reasons for the AAPL drop...
Comment
M

I'm a little bummed not to see quad core CPU (or even a BTO option) for the 13" rMBP. That was the one thing that makes me pause when I think about buying one (though I'm perfectly happy with my 2011 13"MBA and quad core iMac).
Comment

Well, I'm sure I'll be attacked for this, but I'm gonna say it anyway:

Tiny harddrive, barely enough RAM (and not upgradable to the "enough" level), no dedicated graphics, only dual-core processors. It certainly isn't bad, but Apple just took the "pro" out of the 13" line. And come on - it's freaking expensive. If you upgrade the SSD to 512gb and get an i7 (still dual-core - WTF?) processor, it's only 99$ cheaper than the mid-level 15" rMBP, which packs a heck of a lot more power. What gives???

the 13" is NOT a pro device in my opinion. It's more like a beefed-up and slightly heavier Macbook Air. For that, it just costs way too much.
Reactions: adamjackson
Comment

They should add this sticker next to the keyboard:

If I was a shareholder then I'd be worried after seeing that keynote.
Comment

I'd say 30 reasons, the first 299 would have been fine, the extra 30 are just greedy
Comment
S

I can't wait for the time when I can afford a notebook with retina display
And... No 16GB RAM option, really??

It's a very nice device. But with small RAM, slow graphic and that price some happy customers have to pay a hefty early adopters fee. Enjoy!
Comment
K

I like the iPad Mini (a lot - just sold my normal iPad 3rd gen because it was way too heavy for my taste) - but the price is a no-go for now. Plus I already pre-ordered a Surface anyway.
Comment

ArchAndroid said:
They should add this sticker next to the keyboard:

Tell me, have you ever used a 30" ACD connected to a MacBook since the switch to MiniDisplay Port in 2008 ? Because I've not had any issues with running 2560x1600 pixels on integrated graphics before...
Comment

george-brooks said:
I will never buy a 13" macbook.
For portablility, I like the 11" air, and for real work, I can't deal with a screen smaller than 15". Even that is too small sometimes. I miss the 17".
Click to expand...

I thought the same thing till I bought a 13" and fell in love, it was a best of both worlds for me. but to each their own.
Comment
C

ArchAndroid said:
They should add this sticker next to the keyboard:

For this price, I refuse to invest in another Intel chip as they try to figure out how to get their act together and make a GPU worth a damn. Oh yeah, and it is now driving a higher resolution screen which means it is taxed even more than regular leaving even LESS performance left on the table.

I will wait until official benchmarks are out but it isn't looking like too good of a deal as of right now.
Comment

Rizzn said:
If I was a shareholder then I'd be worried after seeing that keynote.
Click to expand...

All of my shares sold a few months ago because I had a stop loss order for 550. I'm hoping it drops back down around there so I can scoop it back up!
Comment

Just ordered a maxed out one.

woo hoo
just ordered one of these toys to play with for 14 days !!!
Comment