iOS 11 won't be available for public beta testers until June and the general public will need to wait until the fall, but if you want to get a quick taste of what's coming in the update, check out our hands-on video below.


Subscribe to the MacRumors YouTube channel for more videos.​
There are subtle design changes throughout iOS 11, with a focus on bolder fonts and borderless buttons. One of the most significant design changes can be seen in the Control Center, which has been entirely overhauled with a new look, deeper functionality, and better customization.

An entirely new App Store has been developed for iOS 11, and for the first time, apps and games are split out into their own sections. There's a "Today" view that's updated on a daily basis with recommendations, developer stories, and more.

Files, a new app, mimics the Finder in macOS and makes it easier to manage files on iOS devices, and Siri has a new, more natural voice. Messages has a new app drawer to make it easier to use stickers and apps, and there's a new built-in person-to-person Apple Pay feature for sending money to friends.

Along with these new features, there are several changes that are specific to the iPad. A new bottom Dock has been added, for example, and that dock is accessible from anywhere with a simple swipe up from the bottom of the display. A new App Switcher on the iPad (accessed with a double swipe) shows a tiled view of all the open apps to make switching faster and more Mac-like.

We'll have more videos covering iOS 11 features over the course of the week, so make sure to stay tuned to MacRumors.com.

Still missing a fundamental feature here: be able to quickly swap from one WiFi network to another right out of the Control Center. Anyone else in the need of this?
Reactions: streetskooler, Niklas_nick, tyasjs and 28 others
Comment

I do like some of the changes, however, it doesn’t seem like a major update to me. More of an “s” upgrade, if you will. I don’t like the new bold font they’re trying to use, reminds me of a Zune player or something....
Reactions: ysr, ZZ9pluralZalpha, pratikindia and 9 others
Comment
G

dla.plexure.net said:
Still missing a fundamental feature here: be able to quickly swap from one WiFi network to another right out of the Control Center. Anyone else in the need of this?
Click to expand...

I mean... how often would someone REALLY be doing that... Seems like a rather silly "feature" to waste resource on.
Reactions: SeanR1, zapm, BlueParadox and 21 others
Comment

Is there any word on iOS 11 allowing multi user sign in on an iPad? This is a huge requirement in our household before we buy a new iPad!
Reactions: SeanR1, BlueParadox, M.bruz and 7 others
Comment

super tomtendo said:
I mean... how often would someone REALLY be doing that... Seems like a rather silly "feature" to waste resource on.
Click to expand...

Umm a lot of people... being able to 3D Touch deeper into Wifi and Bluetooth and actually pick which one you want/need at the moment seems like a huge oversight.
Reactions: streetskooler, Niklas_nick, DeepIn2U and 26 others
Comment
M

Does anyone know if you still have to unlock your phone to do a tapback in Messages? I find it odd that I can enter a reply to a message with screen locked, but can't do a tapback which is surely less of a potential security issue.
Reactions: hagar, SkankHunt42 and jmh600cbr
Comment

Files on the iPhone? I thought that was iPad only. Interesting.
Reactions: tyasjs, DeepIn2U and Statusnone88
Comment

No labels in the dock? That annoys me. Maybe it's a bug.
Reactions: tyasjs, formerpc, BJMRamage and 4 others
Comment 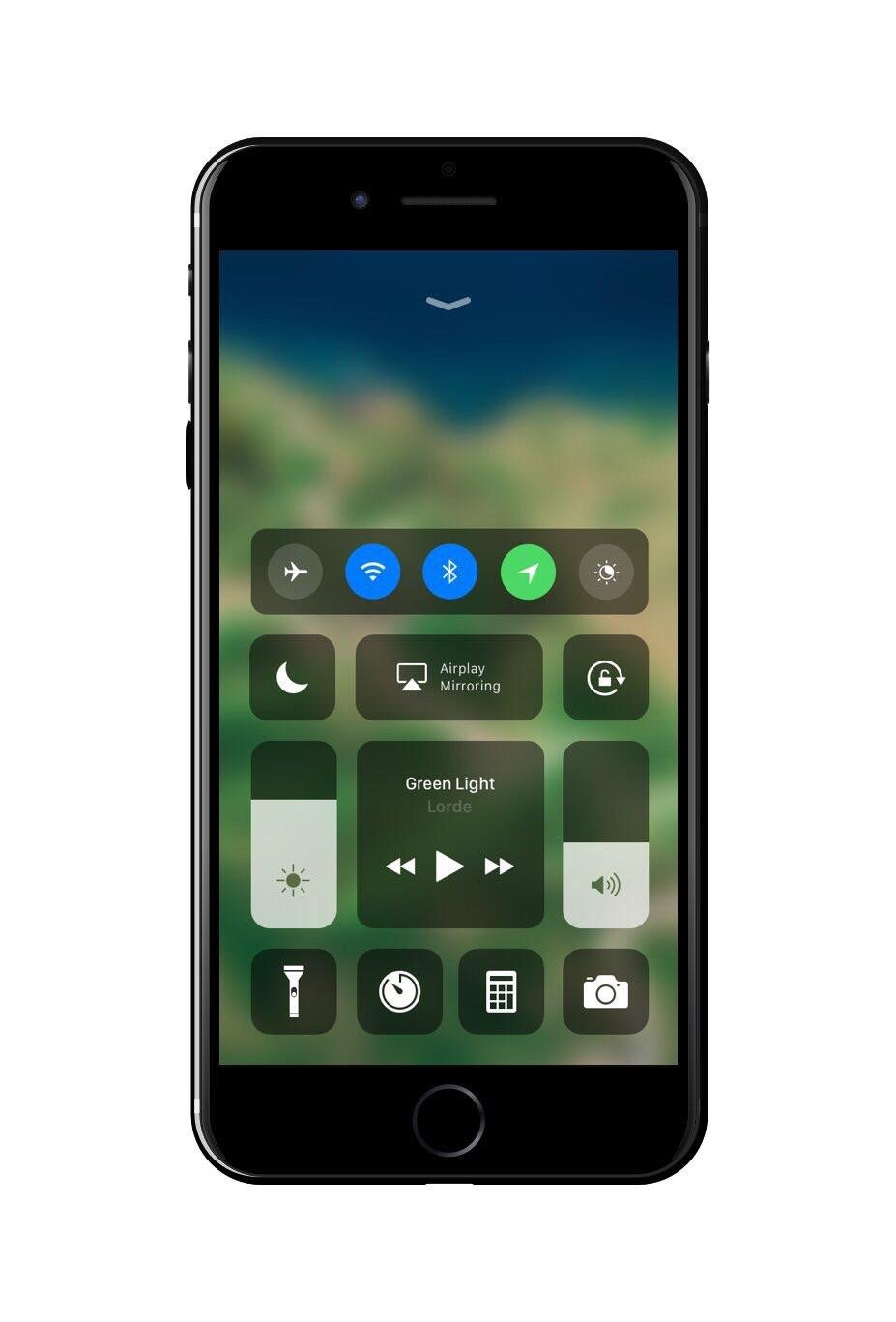 We should be able get Control Center to look like this mockup.
Reactions: AdiQue, Avenged110, ysr and 42 others
Comment


I agree. I love iOS but this update feels like a “we changed shyt just to change it.” The new lock screen and notification “hybrid” is utterly stupid.
Reactions: Avenged110, tyasjs, DeepIn2U and 12 others
Comment
P

Files App??? Steve Jobs has got to be rolling over in his grave.
Reactions: mgauss7, ysr, SeanR1 and 5 others
Comment
U

Did I hear that correctly? The iPencil now works with the phone?
Reactions: tyasjs and mejsric
Comment
G

iOS 10.4 but heck, we just call it iOS 11.
Reactions: ysr, Illumiiinati, yep-sure and 6 others
Comment
C

super tomtendo said:
I mean... how often would someone REALLY be doing that... Seems like a rather silly "feature" to waste resource on.
Click to expand...

Anyone that wants to monitor more than one external camera, such a GoPro. This would be a game changer, honestly.

Anyone testing various networks, or in an area with several they need to use alternately, such as for work purposes.

Anyone caught between 2 networks, where the iphone refuses to jump to the stronger signal.

Now that they've added depth touch, putting that functionality under the wifi icon seems fairly trivial, from a resources-and-interface perspective. Nothing new needs to happen, the access to the menu just needs another display. Not exactly cutting edge. I'd use this pretty often, myself.

Let's also get Low-Power Mode in there somewhere easier to access. I toggle that one on and off all the time.
Last edited: Jun 6, 2017
Reactions: 341328, Internet Enzyme, xpxp2002 and 7 others
Comment
H

The video says if you can't talk you can write to Siri. That's misleading. It only lets you "edit" text you have already spoken. There is a feature in accessibility where you can enable siri text submissions without having to use your voice, but then that completely disables voice siri, meaning you can't do both.

Hopefully this gets fixed as most of the time use Voice Siri but would love like how I use pull down for spotlight a million times a day would be great to be able to enter siri questions into spotlight. Toggling an accessibility feature on an off each time defeats the purpose of trying to save time by using siri in the first place.
Reactions: MintzMintz and iFanaddic
Comment

iOS 11 is an absolute UI mess. What happened to the harmonious design language that Steve embraced? CC and the App Store are jarring to look at. What is with that white space and large, bold font? There are like four different font sizes in the App Store homepage. Why weren't basic functions included like having two apps open at once or choosing a default app? Why don't we have bundled notifications? Mess.

My next phone will be a Galaxy. I've heard so many great things about it from friends who switched after owning an iPhone for years.
Reactions: HVDynamo, Internet Enzyme, Huck and 5 others
Comment
T

ghostface147 said:
No labels in the dock? That annoys me. Maybe it's a bug.
Click to expand...

It's a feature, you can remove apps from the dock and labels come back. Since docked items are considered to be your main points of interest and most used they don't need labels. At least hows how I see it. I wish there was an option to turn off labels but that will never happen.
Reactions: chrisbru, marioguarneros, Internet Enzyme and 2 others
Comment
D

Mostly petty bullsh*t to me except the p2p Apple pay
Reactions: streetskooler and mrzz
Comment
H

urbanslaughter97 said:
Did I hear that correctly? The iPencil now works with the phone?
Click to expand...

Yes you heard them correctly saying that, however no its not correct. Pencil does now allow you to write on an iPhone. What they meant to say presumably was you can write in notes on your iPad. There are a few other inaccuracies in the video so take it with a grain of salt.
Reactions: Internet Enzyme, M_Json and insomniac86
Comment

dla.plexure.net said:
Still missing a fundamental feature here: be able to quickly swap from one WiFi network to another right out of the Control Center. Anyone else in the need of this?
Click to expand...

Ds6778 said:
Umm a lot of people... being able to 3D Touch deeper into Wifi and Bluetooth and actually pick which one you want/need at the moment seems like a huge oversight.
Click to expand...

Eh. I think a lot of people is being pretty generous. I own a lot of tech in my house and I don't find myself switching networks and bluetooth devices. Do you really struggle with that?
Reactions: SeanR1, Huck, ILikeAllOS and 1 other person
Comment
You must log in or register to reply here.
Share:
Facebook Twitter Reddit Email Share Link
Register on MacRumors! This sidebar will go away, and you'll see fewer ads.
Sign Up
Top Bottom