While we wait for repair website iFixit to finish its teardown of Apple's new Studio Display, MacRumors is able to provide a first look at the display's internal design with an image sourced from Apple's documentation for technicians. 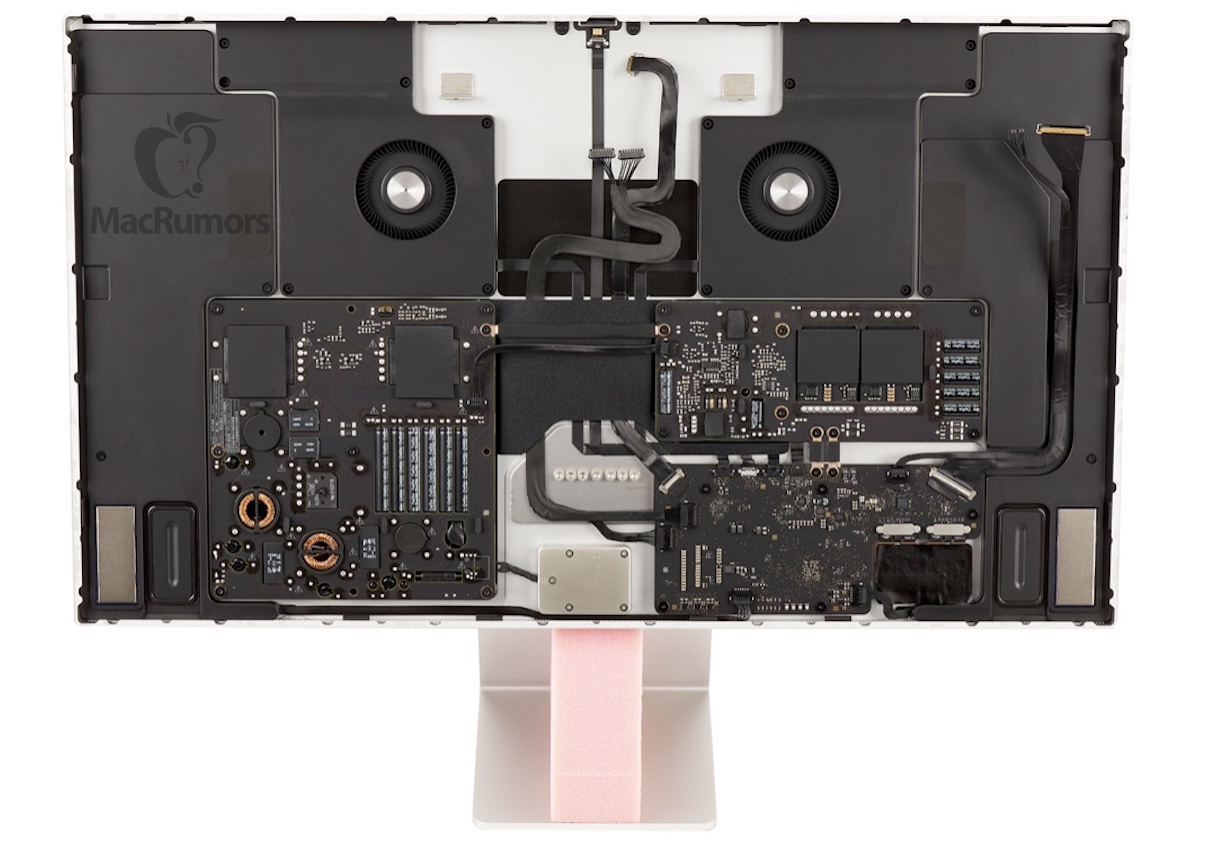 Three large boards are visible inside the Studio Display. The left and top-right boards are for power supply and the bottom-right one is the logic board housing components like the A13 Bionic chip and 64GB of flash storage. Last week, it was discovered that the Studio Display runs the same build of iOS 15.4 as an iPhone.

The image reveals that the Studio Display is also equipped with two internal fans on the left and right sides for cooling the display.

Apple says the Studio Display features a high-fidelity six-speaker sound system, and at least four of those speakers are visible in the bottom corners of the display. The speakers appear to have a similar design as those in the 24-inch iMac.

There are also flex cables visible for connecting the display panel and the 12-megapixel Ultra Wide camera system to the logic board.

iFixit said its Studio Display teardown is in progress, so we should have a more comprehensive look inside the display soon.

Wow, it didn't take you very long to find the MacRumors logo hidden inside!
Reactions: Tim Apple’s Glasses, omglolbbq, chabig and 55 others

Looks like a lot of chips inside that display. Almost looks like a iMac 27".
Reactions: Boyyai, ChromeCloud, jrsheets and 15 others
J

Wow, might as well just be a full computer
Reactions: Boyyai, cw75, _Spinn_ and 33 others

And it could be since it has A13 in it. Too bad you can't run full iOS on it, even if just for sh!ts and giggles. Or even better, run macOS on A13. It would actually run as fast as a 2015 era iMac.
Reactions: Boyyai, jamesrick80, sorgo and 2 others

It WAS a 27 inch M1 iMac but Apple dismantled it to be a monitor for the Mac Studio. The Mac Studio probably started as Mac Mini Pro.
Reactions: jeffpeng, Boyyai, jamesrick80 and 7 others

Hey! The power cable is removable.
Reactions: Curiousdump, eifelbube, twocents and 4 others

Why not let it run iOS?
Reactions: jamesrick80

Been waiting for this one!
S

Yep, that is actually exactly what it is just minus the powerful chip. I guess that is at least part of the reason it is $1600.
Reactions: jrsheets and Douglas-NZ
M

This has the processing power of a previous iteration iPad, but could have easily taken an M1, and ran Mac OS.

Instead, you get a below par monitor. Ouch.
Reactions: Boyyai, jamesrick80, niho and 7 others

Honestly think this was going to be the iMac Pro and they switched it to be a display. Why does it have 2 fans in it!?
Reactions: Boyyai, =Alb=, neander and 9 others
J

So basically it's the iMac. And without a chin. Apple just decided that's better to sell it as a monitor only because people will have to spend more for some computer too.
Reactions: =Alb=, JohnZimmerman, kyjaotkb and 9 others
D

Love how it looks like a robot face - with eyes, nose, and puffed out cheeks - even has teeth!
Reactions: Curiousdump, PJL500, Burger Thing and 4 others

How do I make a phone call with it. Using Siri? or do I dial a number with the numeric keypad?
Reactions: JohnZimmerman, Curiousdump, twocents and 1 other person
C

Wonder if Apple might unlock some more capabilities of this monitor in future. Wouldn't be the first time an iOS device was shipped with limited features that later opened up. A guy can dream...
Reactions: cw75, JohnZimmerman, Curiousdump and 4 others

Hey look! Apple even hid a Macrumors logo inside there!
Reactions: omglolbbq, Curiousdump, aorr and 1 other person

tomtad said:
Honestly think this was going to be the iMac Pro and they switched it to be a display. Why does it have 2 fans in it!?
Click to expand...

To keep the whole thing cool? When you draw 96W for your MacBook and it's on maximum brightness, it will get hot in there.
The old Thunderbolt Display also had a fan (the XDR has 2).
Reactions: Curiousdump, eifelbube, CarlJ and 11 others

thejadedmonkey said:
Where's the power cable port? Is it removable?
Click to expand...

We also need a tear down of this tool Apple is using to remove the cable.

cwkoller5 said:
Wonder if Apple might unlock some more capabilities of this monitor in future. Wouldn't be the first time an iOS device was shipped with limited features that later opened up. A guy can dream...
Click to expand...

Although I would like to see that too, it's extremely unlikely. With the unused radio module in the iPod Touch 3rd gen, the temperature sensor in the HomePod mini, it's like Apples Schroedingers Cat: it exists, but at the same time it doesn't exist for Apple...
Reactions: Amadeus71, Shirasaki and orbital~debris

A 60Hz non-HDR display with not one, but two fans. Huh…

I wonder if they're there just so people can't complain if the display somehow overheats in the future.
Reactions: IllinoisCorn

MVMNT said:
So they updated the iPad Air to an M1 - which could theoretically run Mac OS

This has the processing power of a previous iteration iPad, but could have easily taken an M1, and ran Mac OS.

Instead, you get a below par monitor. Ouch.
Click to expand...

macOS already has support for A series iPad chips.

Remember, the first available Mac mini in the wild runs off A12Z. 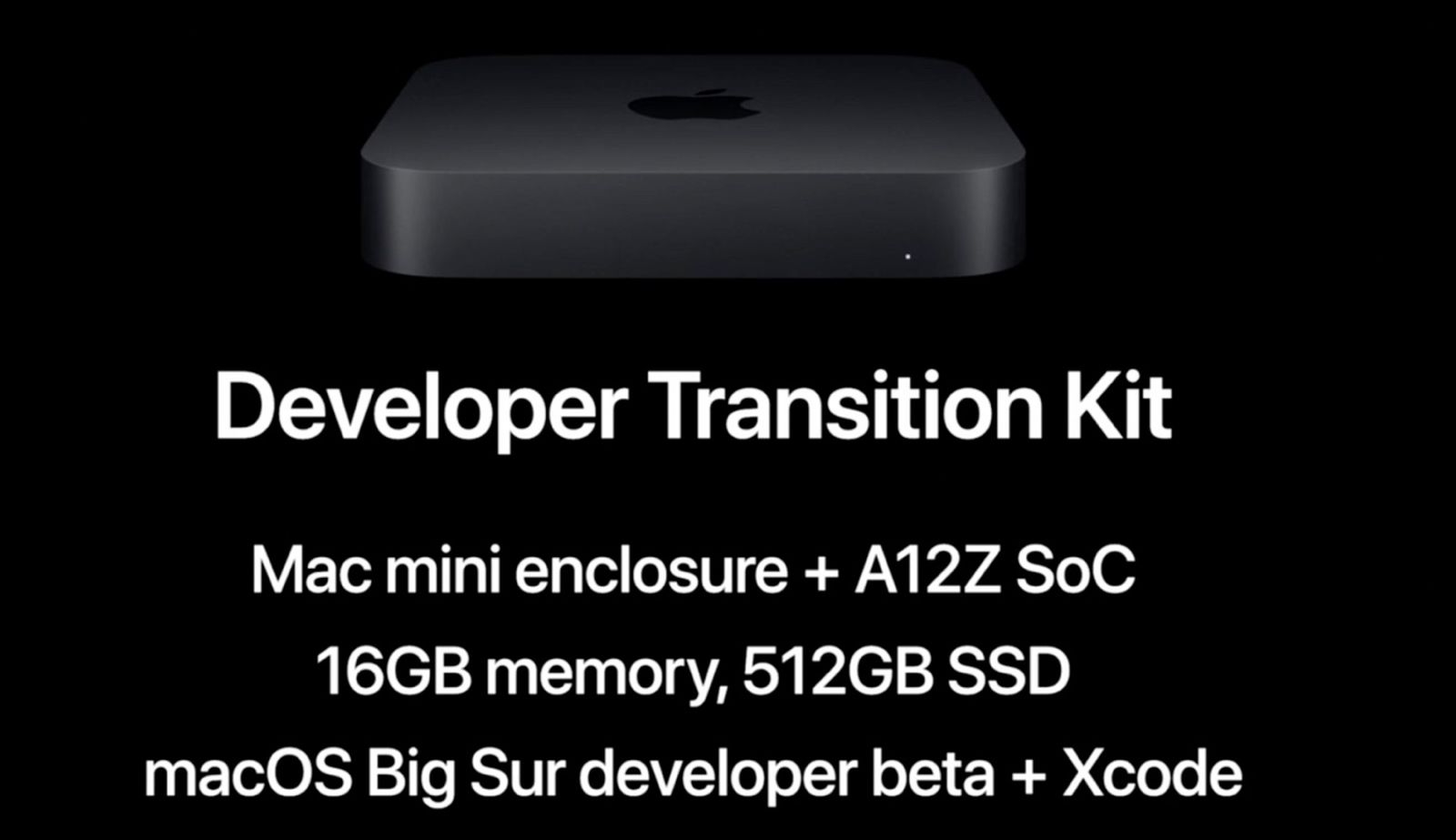