How To Put Newsstand In A Folder 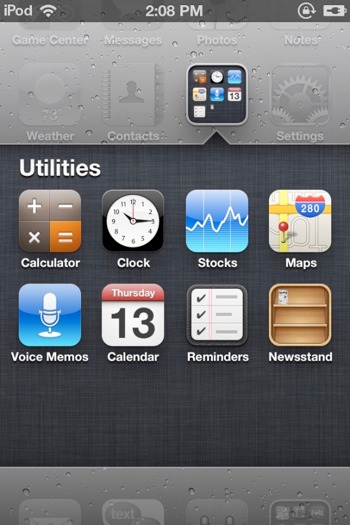 The Coding Massacre has discovered a trick to force the iOS 5 Newsstand into a folder. The only reason to do this is to tuck Newsstand away and hide it -- users who have performed this trick discovered that opening Newsstand when its in a folder crashes Springboard, the main home screen on the iPhone.

If you wish to use Newsstand at some point, simply remove it from the folder and place it back on the main level.

Article Link: How To Put Newsstand In A Folder

Message to Apple: Please allow us to turn off features like this that we don't want/need!
Comment
L

I'm going to try this is a minute because it'll be so much better in a folder .
Comment
I

newsstand is on my nerves

is there any way to emancipate my nytimes app from within newsstand?
Comment
C

It's not just Newsstand, it's any folder.

Wow, i cant believe my trick actually got posted on MacRumors. This is awesome :3 And yes, on the source link i did mention folder within a folder is possible using this method, but its not very practical, since it crashes everytime you try to open the folder. But if your trying to hide a folder from like your friends or something, its a perfect solution. Funny thing is, i tried this trick on an iOS4 device.. It worked. Its been an iOS glitch for over a year and i hadn't realized it till now xD
Comment

It won't let me drag anything else until the folder is created ? (iPad 2).
Comment

If you try opening Newsstand while it's in another folder, Springboard crashes. You can use it as a was to quickly respring Springboard!
Comment
J

firestarter said:
Message to Apple: Please allow us to turn off features like this that we don't want/need!
Click to expand...

Oh I was doing it wrong, I managed to do it now .
Comment
A

kockgunner said:
If you try opening Newsstand while it's in another folder, Springboard crashes. You can use it as a was to quickly respring Springboard!
Click to expand...

Yeah, if you quickly wanna respring without JB'ing, like if your device starts to go slow, this would work wonders.
Comment

Folder in a folder doesn't work. When you click on it and the device restarts, the change is negated.
Comment
S

I just put it in there and my phone crashed... haha nice
Comment
W

Thanks for the tip (and Im talking to the poster that figured it out).
Comment
A

strausd said:
I just put it in there and my phone crashed... haha nice
Click to expand...

This glitch is for hiding NewsStand for those people who dont like it, it will just respring if its in a folder. If you take it out however, its full functional.
Comment

Works like a champ, so long as you don't try to then use Newstand from within a folder.
Comment

JayPeezy said:
Agreed. Like contacts... it seems redundant to have a contacts app if I can access my contacts from the phone app.
Click to expand...

You need it to be able to access contacts while on a phone call. Or at least you did originally, I don't know if they've updated that.
Comment

Friscochris said:
Thanks for the tip (and Im talking to the poster that figured it out).
Click to expand...

Your welcome. Im still shocked its on this site actually
Comment
A


Translation said:
If you are among those who have already switched to the new iOS 5, have noticed that there is an application that can be moved anywhere, ie can not be added to a folder, along with others that do not use, for example.

It's Newsstand application which, for some reason, Apple does not allow us to move in any folder, as is possible with any other application of IOS. For some of us, this can be annoying, especially if we use, so that we can disrupt the most simple and useful as a folder to move it away from our eyes.

Well, there is now a tweak, specially designed for this inconvenience, which is called NoNewsIsGoodNews, which is exactly what it is we do not allow the iOS 5, ie moving Newsstand application in a folder, along with the rest of the IOS software.

NoNewsIsGoodNews is available for free in Cydia BigBoss repo site and is intended exclusively for iOS 5.

UPDATE! It seems that tweak the application it deletes all of Springboard. To retrieve it, simply uninstall it.
Click to expand...

Maybe if you could put a folder inside a folder that is in a folder.