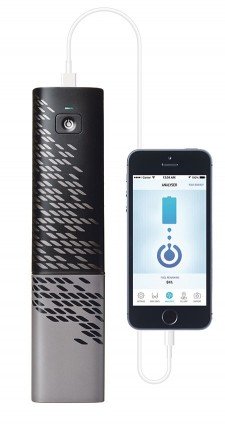 Energy technology group Intelligent Energy Holdings today announced the retail launch of the Upp in the United Kingdom. The Upp device is a portable power solution driven by a hydrogen fuel cell that is used to charge USB-compatible devices.

A rumor this past summer claimed Intelligent Energy was partnering with Apple on a patent acquisition and to potentially produce fuel cell technology for future Macbooks and other portable devices. It is unclear if this Upp sales deal is related to that rumored partnership, but Apple patent applications have revealed the company's interest in fuel cell technology over the years.

The Upp uses snap-on refillable cartridges, providing a charge which is equivalent to "the same speed as plugging it into the wall." The product can be purchased in a starter pack that comes with the Upp Fuel Cell and one Upp Cartridge for £149, or around $230.

"Upp represents the start of the next generation of energy devices, a signal to the portable electronics market that customers are ready to adopt transformative technologies," Intelligent Energy's Chief Executive Officer, Dr. Henri Winand said about the device. "Consumers want energy independence as the demand and reliance on portable devices accelerates."
Click to expand...

The company promises that one cartridge will last for about a week. When in need of one, users can use the Upp smartphone app to find a local Upp Cartridge exchange, hand in the used cartridge, and purchase a new one for £5.95, or about $9. That week of power on average equates to about 900 additional hours of standby or 32 hours of call time, 26 hours of video, or alternatively an extra 40 hours of web browsing.

Pocket-lint went hands-on with the Upp and discovered a few minor caveats to the Upp's design, calling it a "weighty and large beast" and that it "lets out a weird hissing sound and faint odor" when charging up a device. They also pointed concern towards the small number of retail vendors offering cartridge trade-ins at the moment.

It's also worth noting that it's a fledging technology that will no doubt get better over time - hopefully lighter at least - and more widely supported. For now though, if you plan a long trip up a mountain or something, you might find the £149 starter pack (Upp cell and cartridge included) a useful addition to your gear.
Click to expand...

The Upp also comes with a downloadable app that displays usage statistics, power levels, Upp Cartridge exchange locations, FAQs, and customer support and can be downloaded from the App Store. The Upp can be purchased at Apple Stores in the UK or on Upp's official website.

Nice.. Time for Apple to buy them and then shut them down to reduce competition...

By the way.. what is the advantage again of this thing to carrying around a regular charger other than the extra money spent for the fuel cells, massive size, extra weight, hissing sound and the 'weird' odour???.. Oh yes.. some extra hours of energy to browse the web when you are in the middle of Amazon.. without internet connection..
Last edited: Nov 19, 2014

Hm, I rather just find a wall somewhere.

Why not just carry around a generator. My backpack isn't packed enough!
A

This seems really pointless, like every other attempt at using hydrogen.
R

So you charge this device with electricity and give it a hydrogen cartridge? What advantage over a battery?

lets out a weird hissing sound and faint odor
Click to expand...

As of 1552 on Nov 19th it's not on sale in the Apple Store UK. I can see fun and games trying to take this onto an aeroplane!
I

Looks like an overkill for me... unless you go into a jungle for a week, but in that case, you won't have any cell signal.
B

Unless this thing can recharge from ambient water vapor...

This is a huge stretch.

ironsienna said:
By the way.. what is the advantage again of this thing than carrying around a regular charger???
Click to expand...

Those who make the fuel can maintain the status quo of the masses having to stop at the equivalent of a gas station to refuel... regularly paying cash to do so.

I just carry one of these around.

Why does it have to be plugged in? I don't understand why I'd need BOTH exchanging the cartridges AND plugging the device in to use it.

1) the cartridge and fuel cell.
2) The hydrolyzer, which recharges the fuel cells using electricity and water.

The benefit being that you can re-use your own cartridges by refilling them with hydrogen yourself.
C

I can sort of see the point when you don't have access to a wall socket or car/lighter adapter, but they lost me when they got to the single-use-then-buy-another cartridge system.

Better than having a mini reactor in your pocket! Although if we can actually do that in 100 years, that would be sweet. I might actually be here by then, I'm under 20.

Does it come with a backpack?

So you're paying $9/week for a device that can charge your phone? Am I understanding that right? If so, that seems colossally stupid.

I think it's only available from Apple retail stores.

...now available at Apple Stores across the UK and can also be ordered from the Upp website..
Click to expand...

My Mophie costs a lot less, smaller and lighter, and far easier to use. Fuel cells have a long, long way to go before they'll be practical and useable for charging portable devices.

Holy moley I just burst out laughing at work when I read that.

crsh1976 said:
I can sort of see the point when you don't have access to a wall socket or car/lighter adapter, but they lost me when they got to the single-use-then-buy-another cartridge system.
Click to expand...