iCloud Down for Many Users, Causing 'The Application You Have Selected Does Not Exist' Error [Update: Fixed]

iCloud appears to be down for many people at the current time, based on complaints from MacRumors readers and Twitter users.

Apple's system status page was not initially displaying an error when the problems started, but has been updated to confirm an issue with iCloud account sign ins. The support site says that some users may be unable to sign in to their iCloud accounts and may also be unable to access iCloud web apps and iCloud Mail.

Some users are seeing a message about needing to verify their iCloud accounts, and when attempting to sign in, are getting an error message that says "The application you have selected does not exist." Other iCloud-based services such as Apple Pay are also not working properly, and app specific passwords are failing.

There's no word on when the iCloud problem will be fixed, but we'll update this article when Apple addresses it.

Update: According to Apple's System Status page, the iCloud issue has been fixed.

Article Link: iCloud Down for Many Users, Causing 'The Application You Have Selected Does Not Exist' Error [Update: Fixed]

It's all part of Blackout Tuesday, don't panic

Calm down, it’s just a joke. Not a political statement one way or the other.
Last edited: Jun 2, 2020
Reactions: Subarashii, CarpalMac, sparkswillfly808 and 22 others

Was waiting for this to pop up on the main page. It’s annoying, but I’m sure it’ll eventually get fixed. Soon. I hope.

Well that explains that then
B

Yep, tried sending in a tip, but iCloud email was down. Guess I'm glad I'm not the only one...
B

Had to use PayPal. Apple Pay made me enter my password and gave me an error about an unsupported application. 🤷🏼‍♂️
Reactions: iphonerepairsab 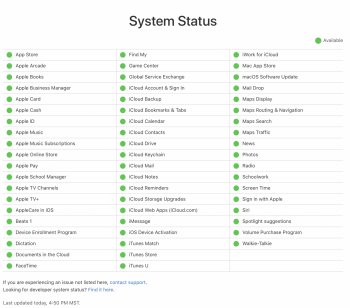 Reactions: michaelnugent, russell_314, The Barron and 1 other person

Certainly what I am experiencing this morning. Apps specific password issues, for example with Spark.
Reactions: decypher44 and Murilo_BR

Maybe there riots on the iCloud server farm?
Reactions: Subarashii, temptee, michaelnugent and 5 others
K

It's definitely down. No dice being able to log into iTunes.

I was just going to check and pay my Apple Card balance and the same thing happened.
Reactions: decypher44
M

Burger Thing said:
Certainly what I am experiencing this morning. Apps specific password issues, for example with Spark.
Click to expand...

Spark driving me crazy! Looks like I'll have to delete the account until apple gets their 💩 together.
J

I hate that time delay I have between: troubleshoot and enter password 10x from different apps and oh, maybe I should check and see if Apple is having an issue. I never learn. Lol
Reactions: na1577, HDJulie and decypher44

Can confirm issues when requesting money via Apple Pay Cash. Bummer but it will be fixed.

This proves automatically why dependence on cloud services is bad. And Apple wants to invest more in this technology? Geez!
Reactions: Digital Dude, Donal Mountain, Huck and 3 others

I hope they fix this soon, I use Apple Cash for my business. Several of my customers are supposed to pay me tomorrow.

This morning I was unable to get to my subscriptions in the app store - kept saying Could not connect. World of Warcraft was DDOS'ed heavily about 30 mins ago - not sure if related or not but a lot of services I use today seem to be having problems.
Reactions: decypher44 and kupkakez
J

SocialKonstruct said:
This proves automatically why dependence on cloud services is bad. And Apple wants to invest more in this technology? Geez!
Click to expand...

Agree - yeah I can't do anything with Apple Pay now either.
A

Was wondering why I couldn’t pay my card off .

Glad this is an Apple thing. I thought Catalina was just stacking on more issues.

SocialKonstruct said:
This proves automatically why dependence on cloud services is bad. And Apple wants to invest more in this technology? Geez!
Click to expand...

Dependence on cloud services brought us a lot. An outage here and there isn't unexpected. Being able to check my balance from my phone and iPad instead of having to walk into a bank is good.
Reactions: ZZ9pluralZalpha, G5isAlive, HDJulie and 1 other person