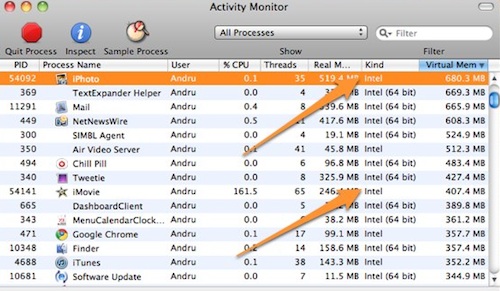 Gear Live confirms that Apple's new iLife '11 suite retains the 32-bit codebase found in earlier versions, squashing hopes that the company would make the transition to 64-bit code for the release.

So we figured that one unannounced "feature" would likely be that the iLife suite had been converted to 64 bit. After all, Snow Leopard has had more than enough time to mature out in the wild, and it seems that developers left and right have jumped onto the 64 bit bandwagon. That's why we were sorely disappointed when we launched Activity Monitor and found that, unlike just about every other process and application we are running on the Mac Pro, the iLife apps are still labeled as "Intel" rather than "Intel 64 bit."
Click to expand...

While speculation regarding a shift to 64-bit for iLife has floated around for some time, the first specific claims of the change surfaced in July alongside claims that the release would ship in August for $79 and would see a revamp of iWeb, the disappearance of iDVD, and a new "mystery" application, none of which came to pass.

The claims were fed earlier this month by the appearance of listings for new iLife '11 books on Amazon's German site, although we noted at the time that the relevant book description appeared to be taken almost point-by-point from the earlier rumors rather than from any inside knowledge.

Hmmm interesting... don't you think they are taking to long to go to all 64 bit?
S

Apple sure is taking their sweet, precious time.

Come back - one year!

Yep, and the update will be free for anyone who purchased iLife through the Mac App Store.
S

Logic 9 wasn't 64-bit when it was released. Got updated to 64-bit with a .1 update. They might do the same with iLife and iWork.

I guess everything that's on stage stays on stage. Don't let the cutouts fall over.

imacman9 said:
Hmmm interesting... don't you think they are taking to long to go to all 64 bit?
Click to expand...

I want to see reports like this every time iTunes is updated.

While it would be nice to have 64-bit iLife, I think it is rather trivial for them update them when they get to that point. With iTunes though, it's going to be one hell of a rewrite and I think that will really tell us when Apple is planning to finally get all their apps up to 64-bit.

With delays and rumors of features cut from Final Cut Stuios, I think this in large has to do with a lack of staff at Cupertino or a lack of dedicates staff to OS X. it's clear and I don't blame them that iOS is a prime concern for the team and we have seen plenty of delays on the OSX side for that sake. This again i assume had to do with that as well.

Unless you are using an application that has to directly interface with some type of hardware driver (and it's a compatibility issue), does it even matter IRL?
A

It's likely going to stay that way until Apple updates the Quicktime X framework with Quicktime 7's encoding features/options.
T

It might have to do with Quicktime X still unable to completely replace Quicktime 7.

Pretty sure that was a given since the system requirements were shown to be a Core Duo and not a Core 2 Duo.

Well maybe, if they can release it before we are all destroyed in 2012...
F

Hopes? Disappointment? Does this really affect users? At all?

Seems like we're still playing the Gigahertz Game... *sigh*
A

Lucky736 said:
Pretty sure that was a given since the system requirements were shown to be a Core Duo and not a Core 2 Duo.
Click to expand...

That's completely irrelevant as every app that's 64-bit on Snow Leopard also has a 32-bit counterpart for the Core Duo machines.
D

Lucky736 said:
Pretty sure that was a given since the system requirements were shown to be a Core Duo and not a Core 2 Duo.
Click to expand...

That doesn't matter because Apple can easily include the 32-bit version as universal binary like the rest of the OS has so that it will still run in 32-bit when you don't have a 64-bit capable chip.

Are the iLife apps intensive enough to benefit from 64 bit?

I'm always an Apple supporter and i don't bash them for stupid things or just fear like it is happening with Mac App Store now.... but for this time i must admit i'm disappointed. I was sure iLife11 = 64bit. Maybe an update? i really hope so.
You must log in or register to reply here.
Share:
Facebook Twitter Reddit Email Share Link
Register on MacRumors! This sidebar will go away, and you'll see fewer ads.
Sign Up
Top Bottom