Today marks the 20th anniversary of Apple announcing the iMac G4. Unveiled on January 7, 2002, the iMac G4 featured a unique design with a flat-screen panel mounted on an adjustable arm and a hemisphere base housing the computer's internal components. 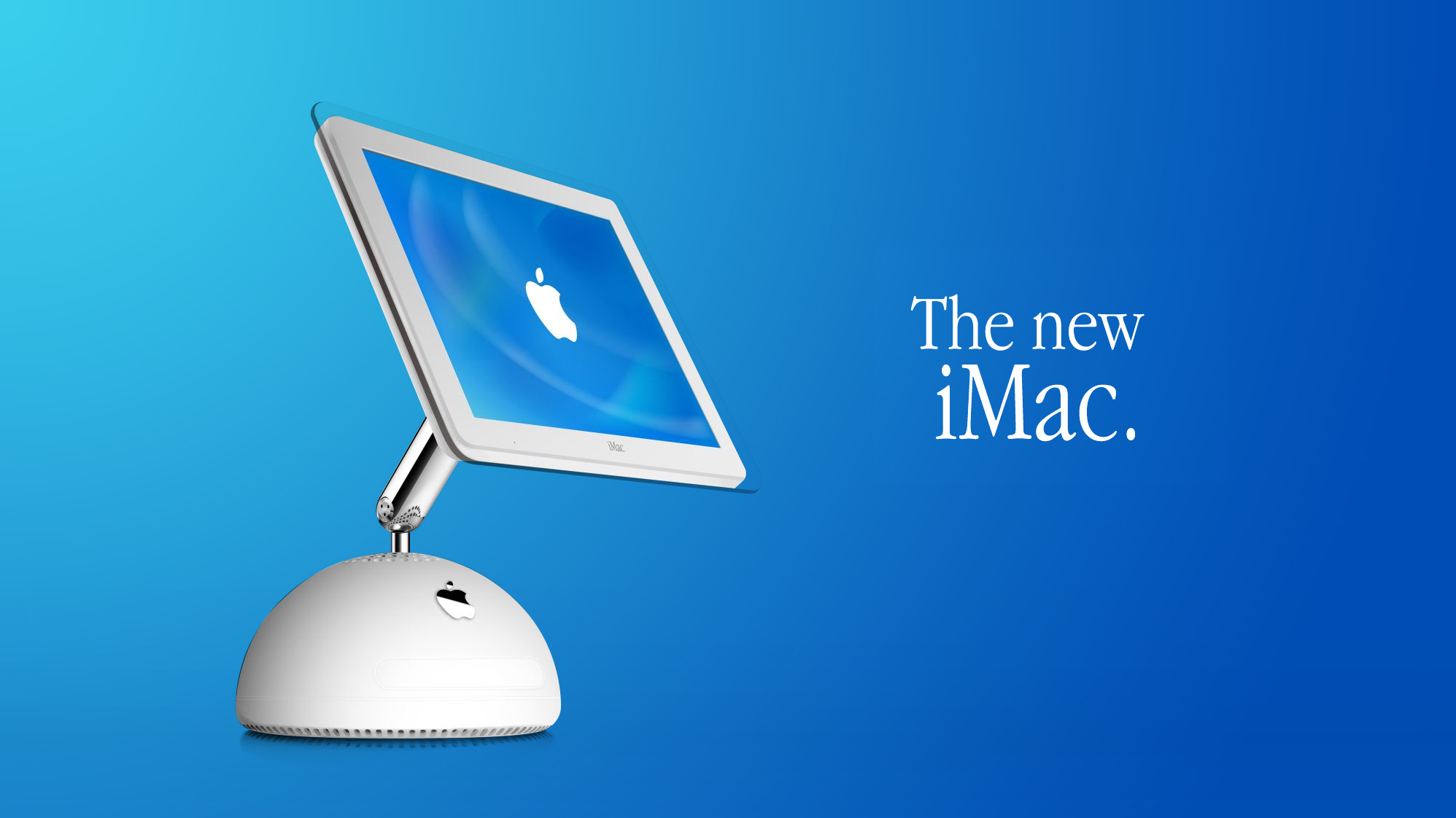 Nicknamed the Lamp or Sunflower, the iMac G4 was innovative for its time as an all-in-one computer with a flat screen that can be moved around freely.

"The new iMac ushers in the age of flat-screen computing for everyone. The CRT display is now officially dead," said Apple's former CEO Steve Jobs in a press release announcing the iMac G4. "And with its powerful G4 processor and SuperDrive, everyone can now affordably create and burn their own custom DVDs and CDs."

Key features of the iMac G4 included a 15-inch flat-screen LCD, 700 MHz or 800 MHz PowerPC G4 processor options, a SuperDrive built into the base for CD/DVDs, up to a 60GB hard drive, up to 1GB of RAM, two FireWire ports, and five USB ports. By the end of 2003, Apple had also released larger 17-inch and 20-inch display sizes.

In his 2002 review of the iMac G4 for Macworld, longtime Apple reporter Jason Snell described the computer as "nothing short of a triumph."

Still looks modern, which is a great achievement when it comes to technology.
Reactions: foliovision, mr_bam, bmot and 56 others
P

What a great piece of kit
Reactions: foliovision, eco7777, anshuvorty and 9 others
F

For a split second, I saw that picture, and thought "they're bringing that design back? Woooooo! Might just be the push I need to get a new Mac!"

Then I saw it was just a historical retrospective, and I turned to the side to look at the still-functional iMac G4 sitting on my bookshelf, and shook my head sadly.

That hovering display was REALLY ergonomic for me, the ability to move it up and down and side-to-side so effortlessly still can't be matched by modern all-in-one designs.
Reactions: vitale, howling command, foliovision and 28 others

I wanted one of these so bad, never had one. Still kinda want one.
Reactions: foliovision, Wintermute121, Cymru1955 and 25 others

Still one of the best Apple designs ever. Loved this computer back in the day!
Reactions: ThomasJL, amartinez1660, anshuvorty and 21 others

The new iMac with the M1 could be on an ARM like this iMac G4.
Reactions: chemenski, Captain Trips, MacCheetah3 and 19 others

Still looking good. I'm pretty sure many of the MacRumors forum members are lucky enough to play around with it on here. Consider yourself lucky. 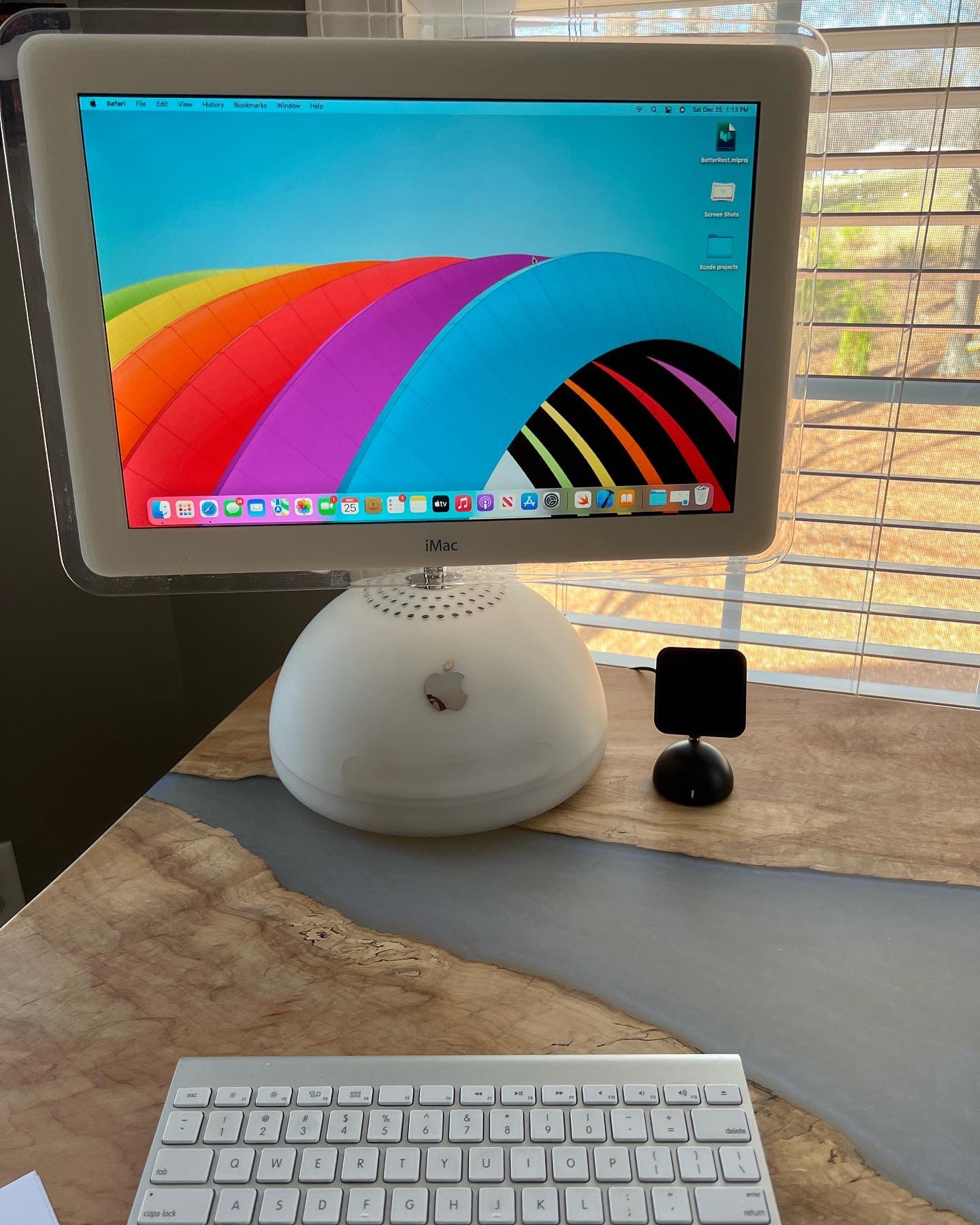 Reactions: eco7777, Vaccaria, TheVowelO and 61 others

I had one of these, that screen was pretty awesome for the time.
Reactions: DeepIn2U, StoneyG, valleian and 1 other person

Man I thought my G4 cube was the hottest thing ever made until I got this iMac. Hot damn Apple was great back then.
Reactions: foliovision, amartinez1660, suburbia and 19 others

I had one for a while. They really were ahead of their time and they had very few hardware problems compared to the iMacs before and after them.
Reactions: Razorpit, Alex_Mac, Sean J and 2 others

TheYayAreaLiving ? said:
Still looking good. I'm pretty sure many of the MacRumors forum members are lucky enough to play around with it on here. Consider yourself lucky.

Best iMac design they have ever done, current iMac is colorful but still kinda boring. They could easily do a similar design using the XDR stand.
Reactions: grs, Razorpit, rneglia and 13 others

It is a pity the ergonomics of the current iMac are not as good as the G4. The iMac G4 is my favourite computer ever, and was nearly my first Mac, but I got talked out of it by a Mac owner. I have since bought one and although it is slow now as a computer, it is a great music player.
Reactions: vitale, foliovision, Alex_Mac and 4 others

To me it looks like a snow cone.
Apple could do this again, except for where to put the speakers.
EDIT: More specifically a Hostess Snowball.
Last edited: Jan 7, 2022

Still makes my heart skip a beat. Gorgeous, and functional in every sense! ??
Reactions: Wintermute121, eco7777, Shawn Llewellyn and 9 others

jimimac71 said:
To me it looks like a snow cone.
Apple could do this again, except for where to put the speakers.
Click to expand...

The speakers for the iMac G4 were external and just as nice.
Reactions: foliovision, Shawn Llewellyn, mackcat and 4 others

It’s design was very unique. It was the first desktop Mac to use a flat-panel LCD, which is dramatically smaller and thinner than a CRT. It also was a reminder that Apple’s design innovation wasn’t a fluke after it’s predecessor the iMac G3 for Steve Jobs.
Reactions: Razorpit, Alex_Mac, Morod and 2 others

I still have mine and it still works.
Reactions: amartinez1660, grs, rneglia and 7 others
A

Wiesenlooser said:
Still looks modern, which is a great achievement when it comes to technology.
Click to expand...

Still looks better than what we have today.
Reactions: foliovision, suburbia, anshuvorty and 8 others

Still have mine in the basement archives nice and tucked away along with all the other Legacy Devices.
Reactions: rneglia, AppleFan1998, PlayUltimate and 1 other person

BornAgainMac said:
The new iMac with the M1 could be on an ARM like this iMac G4.
Click to expand...

Ah the iLamp. It was my first Mac! I still have it and still works.

It was such a talking point back in the day. I kept it in my living room and used it as a sort of digital jukebox. It was the gateway drug to MacOS for me and the next computer I got was a PowerBook. Mind you, if I'd bought the stock instead of the products I'd long be retired!
Reactions: foliovision, amartinez1660, mtbdudex and 5 others

This is the era when Jobs and Ive were firing on all cylinders. The mix of cutting-edge tech and whimsy made computers fun.
Reactions: CalMin, bernuli, George Dawes and 14 others

TheYayAreaLiving ? said:
Still looking good. I'm pretty sure many of the MacRumors forum members are lucky enough to play around with it on here. Consider yourself lucky.

I gave mine to my mom and she still has it up and running. Tho, 99% (if not 100%) of her digital activity has moved to her iPad. Still, the fact that machine's aesthetic still looks modern (as someone above me posted) is a testament to how forward it was 20 years ago. The iMac line continues to be quite the evolution...
Last edited: Jan 7, 2022
Reactions: AngstyKylo, amartinez1660, schneeland and 4 others
You must log in or register to reply here.
Share:
Facebook Twitter Reddit Email Share Link
Register on MacRumors! This sidebar will go away, and you'll see fewer ads.
Sign Up
Top Bottom