Intel has been on a relentless marketing drive against Mac computers in recent weeks, positioning them as inferior to Windows laptops powered by Intel processors. In a slight slip-up, however, Intel has accidentally used a MacBook instead of a Windows laptop in one of its newest ads to promote one of its new 11th-generation chips as "the world's best processor." 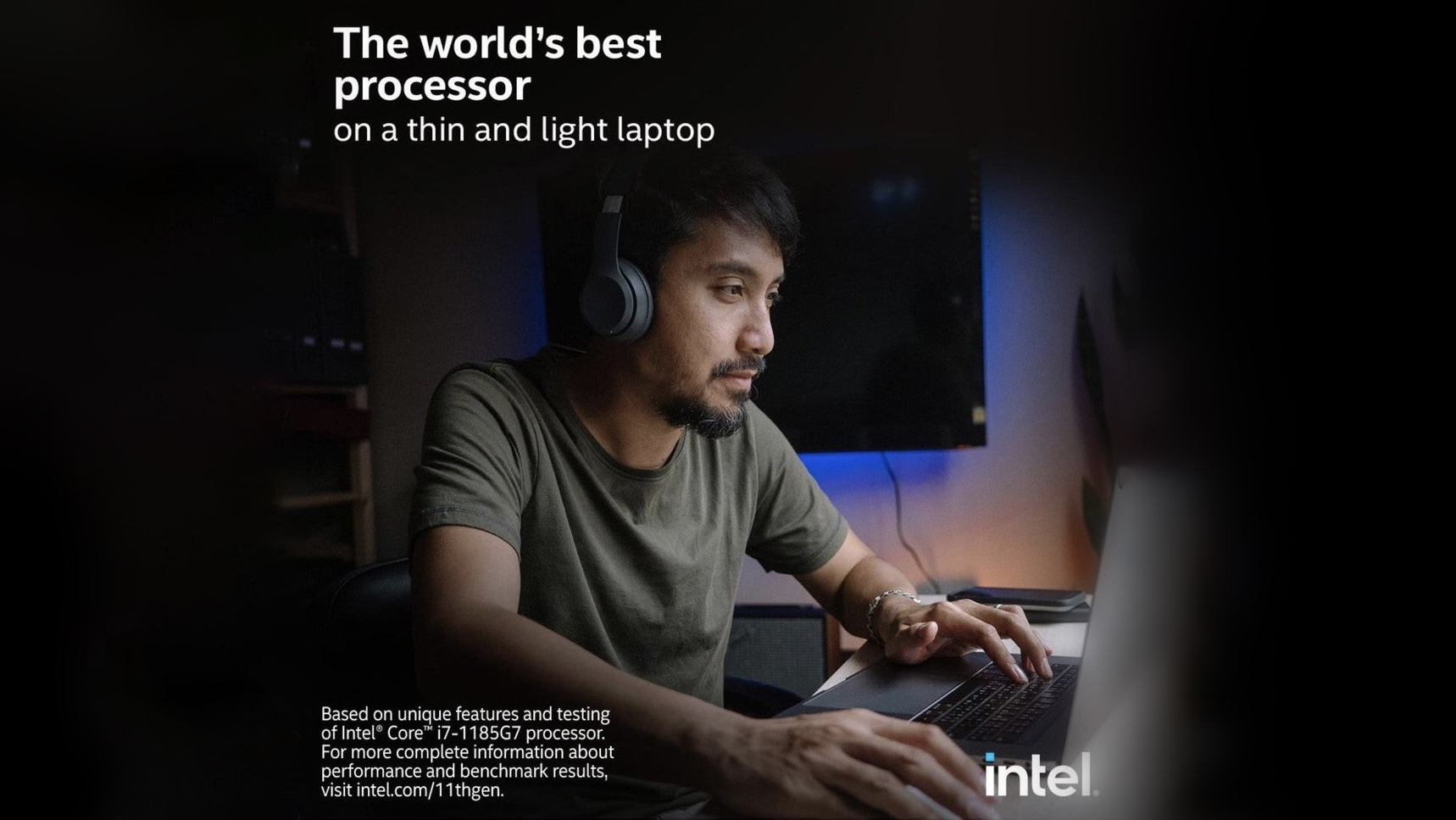 The ad appeared on Reddit and was shared on Twitter by @juneforceone, and it features a man using what clearly seems to be a MacBook Pro. The ad's tagline says, "The world's best processor on a thin and light laptop," and is meant to promote the Intel Core i7-1185G7 processor.

The image Intel uses in the ad is actually a stock image offered by Getty Images, which clearly shows the laptop is indeed a MacBook Pro with an accompanying Magic Mouse.

Apple continues to sell Mac computers with Intel chips, despite its ongoing transition to its own Apple silicon. But while Apple still sells Intel-based Macs, the chip referenced in the ad is not used in any Mac, and in fact, it was launched around the same time Apple released its M1 Apple silicon chip late last year.

One of Intel's most notable marketing campaigns was launched last month and features former "I'm a Mac" actor Justin Long in a series of videos comparing a MacBook Pro powered with M1 to a variety of Windows laptops. Even as the two companies go head to head, newly appointed Intel CEO Pat Gelsinger says he hopes that his company will make Apple silicon chips in the future and have Apple as a normal client.

... I don't even know where to begin with this. Even the dude in the pic looks like he knows what's up.
Reactions: geenosr, lars666, doalwa and 26 others
Comment
T

What a buncha clowns. 🤣🤣🤣
Reactions: lars666, planteater, h34dlez and 2 others
Comment

Another day, another embarrassing ad from Intel.
Reactions: lars666, tranceking26, secretbum and 11 others
Comment

This is worst than Samsung Tweeting their marketing from an iPhone.
Reactions: iBluetooth, floriano8812, peanuts_of_pathos and 20 others
Comment
E

“Based on comparing features” says the small print.

When you make processors and you can’t claim to out-perform the competition then you’ve already said everything.

Still, the nostalgic nerd in me is looking forward to a return of “Mac vs. Wintel”.
Reactions: will_is_here, peanuts_of_pathos, vmistery and 3 others
Comment

was it a slip-up though? i mean they've made it clear that they still want apple as a client. "thin and light laptop" sounds unspecific enough to use a mac imho)
Reactions: Kram Sacul, Alfredo_Delgado, amartinez1660 and 4 others
Comment

Is this hinting at a Foundry swap by Apple?
Reactions: alexandr
Comment
A

Honestly, the person managing the ad campaign has to be penalized or fired.

Like seriously? You held a month long hostile campaign against Apple, and you managed to let this slip by using the VERY BRAND that you're advertising against?

No wonder Intel is failing to catch up with time🤣
Reactions: peanuts_of_pathos, lars666, secretbum and 6 others
Comment

No, but I hear the SoCs that are going into MacBooks are like a rocket...
Reactions: amartinez1660, Shirasaki and FightTheFuture
Comment
D

alexandr said:
was it a slip-up though? i mean they've made it clear that they still want apple as a client. "thin and light laptop" sounds unspecific enough to use a mac imho)
Click to expand...

Yes. Who on earth would think this a good way to court a client? It’s just lazy, stock-image ********.
Reactions: peanuts_of_pathos, ohio.emt and alexandr
Comment

BeefCake 15 said:
This is worst than Samsung Tweeting their marketing from an iPhone.
Click to expand...

No worse than the NFL using Surface Tablets to prop up iPads.
Reactions: amartinez1660, Will do good, BeefCake 15 and 2 others
Comment

Apple Knowledge Navigator said:
... I don't even know where to begin with this. Even the dude in the pic looks like he knows what's up.
Click to expand...

I do love the irony of this, people slating them for using a Mac in an add, when clearly it isn't, but don't let facts get in the way of the fanboi wanking session.
Reactions: maternidad, Shirasaki and jdb8167
Comment

KenaiAndrews said:
Another day, another embarrassing ad from Intel.
Click to expand...

Starting to wonder if this isn't someone's idea of really batsh*t crazy strategy? They sure are getting a lot of attention and there are those that believe 'no news is bad news.'
Reactions: DocMultimedia
Comment

I don't like the snide remarks people are making about Intel since the switch to Apple silicon began. Remember, Macintosh was using Intel for 15 years and it actually breathe new life into the platform. Considering how much PowerPC was a dead end, especially from Motorola on the mobile side, it was very a much crisis if Apple didn't have Intel. I'm sure ARM processors from 2005 to 2015 weren't powerful enough run macOS (OS X).

Keep in mind also, Apple continues to sell a vast majority of their Macintosh portfolio on Intel. We need to respect Intel while saying goodbye at the same time. Some of the comments I've read kinda give the impression of this is how you would treat people in real life too. If a friend helped you out for 15 years and helped you get your work done then of course is starting to decline because another friend can do so same things a little bit better, doesn't mean you need to be nasty.

Even Jobs has talked about this kinda nasty 'us vs them' behavior in past in keynotes (Macworld '97). You wanted Microsoft Office, yet you are booing the CEO of the company who makes it.
Reactions: Chris042785, James Gryphon, ealeks and 22 others
Comment

Have they completely lost their minds? What the hell is going on! They are giving out mixed messages here.
Comment